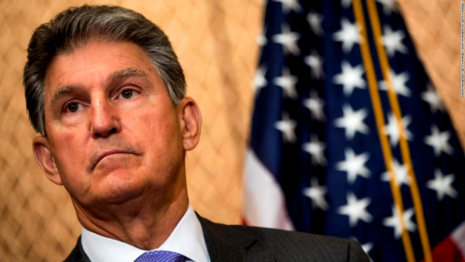 On the heels of being exposed in September for their fake news story about supposed Ivermectin overdose patients flooding hospitals, you would figure that Rolling Stone might want to lower their hyperbole profile a bit. However, no such luck. On October 1 that rag published an extreme climate alarmist hit piece by Jeff Goodell on Senator Joe Manchin for the high crime of opposing the $3.5 trillion reconciliation bill. Before you even read the article itself, you know it is a hit piece just from the title, "Joe Manchin Just Cooked the Planet."

West Virginia Sen. Joe Manchin just cooked the planet. I don’t mean that in a metaphorical sense. I mean that literally. Unless Manchin changes his negotiating position dramatically in the near future, he will be remembered as the man who, when the moment of decision came, chose to condemn virtually every living creature on Earth to a hellish future of suffering, hardship, and death.

Such as death by Ivermectin overdose?

Last night, during the insane and at times comical negotiations over President Biden’s infrastructure bill and his $3.5 trillion Build Back Better agenda (aka the reconciliation bill), Manchin let it be known that he was not going to vote for any measure above $1.5 trillion. And because Democrats can’t afford to lose a single vote in the Senate, if Manchin won’t vote for it, the reconciliation bill won’t pass.

You seem to be forgetting about a certain Senator Sinema.

For anyone who cares about the future of life on this planet, Manchin’s moves are willfully destructive for a number of reasons.

Goodell then goes on to list the reasons for the Climate Apocalypse all because Manchin declined to support a massive spending bill. Of course, he doesn't address the fact of Senator Kyrsten Sinema also opposing the reconciliation bill. So if Joe Manchin is cooking the planet, is Sinema frying or boiling the planet?