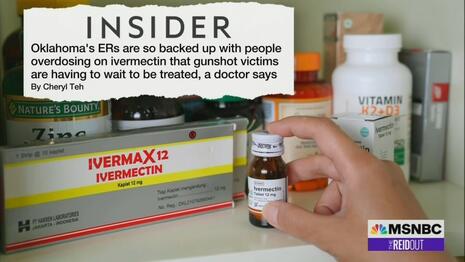 Apparently, pushing the fake UVA rape story and the subsequent lawsuits wasn’t enough to persuade Rolling Stone magazine from sticking to covering just music. But in a now-discredited article published on Friday, the music rag claimed Northeastern Hospital System Sequoyah was making gunshot patients wait as they deal with an influx of people overdosing on a livestock deworming medication thinking it would cure COVID. But none of it was true. And although the magazine had gotten the most publicity for publishing the fake story, other liberal outlets peddled it too.

“The rise in people using ivermectin, an anti-parasitic drug usually reserved for deworming horses or livestock, as a treatment or preventative for Covid-19 has emergency rooms ‘so backed up that gunshot victims were having hard times getting’ access to health facilities, an emergency room doctor in Oklahoma said,” Peter Wade dubiously reported.

And according to one doctor, gunshot victims could not be treated because of it:

“The ERs are so backed up that gunshot victims were having hard times getting to facilities where they can get definitive care and be treated,” McElyea said.

But when the hospital system pushed back on the Stone’s reporting, proving it completely false, the magazine issued an “update” rather than a correction or a retraction.

The update was mainly the hospital system’s statement. “Although Dr. Jason McElyea is not an employee of NHS Sequoyah, he is affiliated with a medical staffing group that provides coverage for our emergency room. With that said, Dr. McElyea has not worked at our Sallisaw location in over 2 months,” they said.

And not only did the magazine’s source not work there recently, they had not treated anyone for overdosing on the dewormer and were treating gunshot victims:

NHS Sequoyah has not treated any patients due to complications related to taking ivermectin. This includes not treating any patients for ivermectin overdose. All patients who have visited our emergency room have received medical attention as appropriate. Our hospital has not had to turn away any patients seeking emergency care. We want to reassure our community that our staff is working hard to provide quality healthcare to all patients. We appreciate the opportunity to clarify this issue and as always, we value our community’s support.

But Rolling Stone’s fake news with the story didn’t stop there.

In their tweet promoting the story, the magazine showed an image of people waiting in line outside a building, as if that was photographic evidence (shown above). But August has just ended and the image had people wearing winter coats, the trees had no leaves, and it was obvious none of them were gunshot victims.

As Spectator contributor Stephen L. Miller reported via Twitter on Sunday, “The photograph Rolling Stone used for their false ivermectin ER story is from January, via the AP and was for a vaccine drive for African Americans by a church.”

The photograph Rolling Stone used for their false ivermectin ER story is from January, via the AP and was for a vaccine drive for African Americans by a church. (HT @FuzzyTaylor235 ) https://t.co/DK3mwASujK pic.twitter.com/NoLivZekWZ

Not only did Rolling Stone publish their own piece pushing the fake story, but others in the liberal media were also peddling their own variations of the fake news. “The sudden craze among COVID-19 vaccine skeptics to take Ivermectin — an anti-parasitical treatment commonly used in horses and other farm animals — has caused an overwhelming amount of people needing treatment for overdosing on the drug across Oklahoma,” purported Brandon Sapienza for the New York Daily News.

And keeping with the trend of usual suspects pushing absolute nonsense, of course, Newsweek picked it up too. “A doctor in rural Oklahoma has claimed that people taking the horse de-wormer medication ivermectin to treat COVID-19 are filling up the area's emergency rooms,” wrote Jon Jackson.

Even MSNBC host Rachel Maddow tweeted out the reporting from the local NBC affiliate that was the source of all the fake news on the story, KFOR. It was also talked about by MSNBC host Joy Reid on-air on Friday using reporting from Business Insider. "An emergency in one rural Oklahoma town is being overwhelmed by people overdosing on ivermectin, the horse deworming medication. It's gotten so bad that gunshot victims, gunshot victims are having to wait to be treated," she parroted.

Unlike Rolling Stone, none of these other outlets have issued updates, corrections, or retractions of their reporting, nor do they have the statement from Northeastern Hospital System Sequoyah.