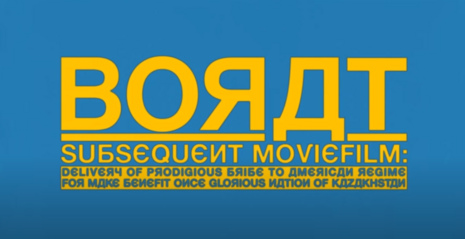 The original Borat felt like comedy got the facelift we didn’t realize it needed.

Now, contrast that to “Borat Subsequent Moviefilm,” structured like a soggy retread of Stephen Colbert monologues from 2017.

Yes, Cohen’s motivation this time ‘round is to attack all things Trump in the most shopworn ways possible. 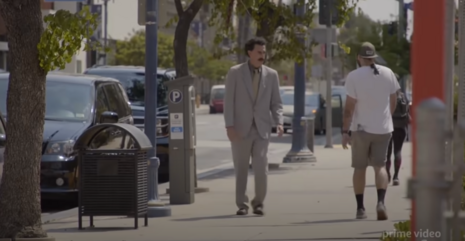 Comedians have been savaging Trump for four years, leaving behind little that’s hilarious or memorable.  Now, the artist behind one of the most cutting edge comedies of the modern era is here to reheat the same gruel. Cohen’s rapier wit is reduced to a rusted butter knife in the belated, and wildly unnecessary, sequel.

Still, the far-left bromides represent a tiny fraction of the sequel. The rest is even worse, a montage of “women are inferior to men” yuks drawn from Borat’s cartoonishly framed homeland, Kazakhstan.

It’s the weakest running joke in modern screen history, and the “Borat” sequel builds its entire premise around it.

The film packs a woke empowerment punch as genuine as a politician apologizing for an affair.

The sequel opens strong, though, giving us hope the project wasn’t as foolhardy as we feared. Poor Borat (Cohen) spent the last decade-plus in a penal colony for embarrassing his nation with the 2006 film. He’s promised freedom if he goes back to America and offers a precious gift to Vice President Mike Pence, the nation’s most fearsome lady killer.

Yuk yuk, because Pence won’t be alone with women due to his strong Christian faith. Yes, that joke expired three years ago, but it’s revived in time to set the sequel in motion.

So off Borat goes, along with his neglected daughter Tutar (Maria Bakalova) who daddy treats like an animal, or worse. She longs to live in a cage all her own, part of Borat’s dehumanizing treatment of women. It’s also a way for the production to reference the President putting Mexican children in cages.

Again, the joke is circa 2018, and Obama did it first. Heck, he built those cages. That doesn’t matter to a stale satirist like Cohen, now reduced to a partisan huckster in search of clapter.

Hang on, though. This is the best part of the movie. We get a few solid laughs in the early going, most involving hard-R rated antics.

What follows is a series of sketches, some obviously staged, others likely staged. And since Borat is now an internationally recognized character Cohen has to don fresh disguises to fool a new round of victims.

Except the characters created for the film aren’t interesting, fresh, funny or memorable.

The film focuses on Borat’s attempt to “gift” his daughter to Pence, culminating in a violently edited CPAC appearance with little satirical or comic payoff. The moment wraps at around the 40 minute mark, meaning Subsequent Moviefilm still has 50-odd minutes to kill.

And boy do those remaining minutes drag on. And on.

The film’s laugh meter starts strong, stalls mid-film and then calls it a night long before the end credits.

Yes, some of Borat’s signature tics remain, like his Jew hatred. That’s played to death, again, culminating in a laugh-free exchange with a Holocaust survivor.

The story shifts during its second half, focusing on a quest to “give” Tutar to Rudy Giuliani. What emerges is heavily edited and mirth-free, much like Cohen’s shtick in 2020.

The Giuliani “gotcha” moment, reported briefly in the press, is nothing of the sort.

The film also finds Borat, or a character played by Cohen, visiting various Republicans, Christians or pro-life folks in order to embarrass them. But he can’t even pull that off. He does meet with two yokels who spout wild conspiracy theories about President Obama and Hillary Clinton, but it’s soon clear they’re either plants or in on the shtick.

Wants some ice for that burn, Deplorables?

The original “Borat” captured comedy lightning in a bottle, so any sequel seemed like a fool’s errand.