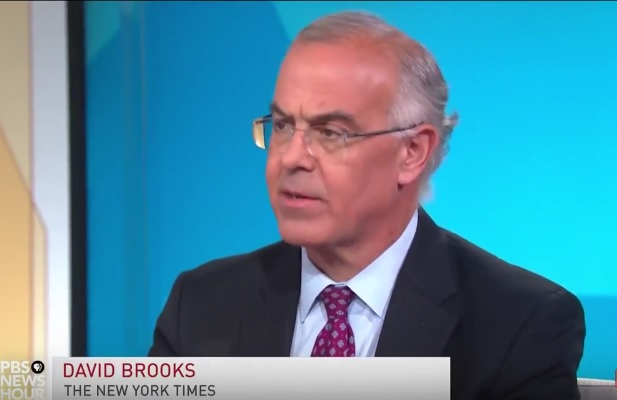 Perhaps the New York Times "conservative" columnist David Brooks might want to consider gettting out of the prediction business.  His rate of correct prognostications has approached the zero mark ever since President Donald Trump was elected. In fact, just three days after the 2016 election, Brooks predicted that Trump "will probably resign or be impeached within a year."

After more than three years since that prediction fail, Brooks' prognostication record remains at about the same laughable level. We need go back only a couple of weeks to January 23 to laugh at his latest bold observation that "Joe Biden Is Stronger Than You Think." Yes, the same Joe Biden that came in fourth in the Iowa caucus with apparently no delegates won from that state. Biden is so far behind third place Elizabeth Warren that no matter how many apps or recounts are used, he doesn't stand any chance to rise in relation to the other candidates there.

Let us now join Brooks in the middle of his January Biden hype:

Almost everybody was bearish on Joe. But now look where we are, weeks from actual voting. If the polls are to be believed, Biden will win Iowa, he’ll come in second in New Hampshire, he will easily win Nevada, he will dominate in South Carolina. He’s now tied for the lead in California and he’s way ahead in Texas.

"Biden will win Iowa." Well, maybe in an alternate universe.

Biden didn’t just luck into this. He and his team grasped six truths:

Including the truth about not counting your chickens before they hatch?

Connection. Connection. Connection. Many candidates pound the podium and lecture at their rallies. It’s the big leader onstage and the passionate mass of followers down below. Nobody makes an individual connection as well as Biden. In a time when people feel exhausted, isolated and alienated, a candidate who seems normal and emotionally relatable is going to have a lot of appeal.

The ironic fact is that the candidate who can be vulnerable has a surprising power.

Powerful enough for Biden to win the presidency in a landslide...but only in David Brooks' fantasy from  three weeks earlier in January.