David Brooks: Trump 'Will Probably Resign or Be Impeached Within a Year' 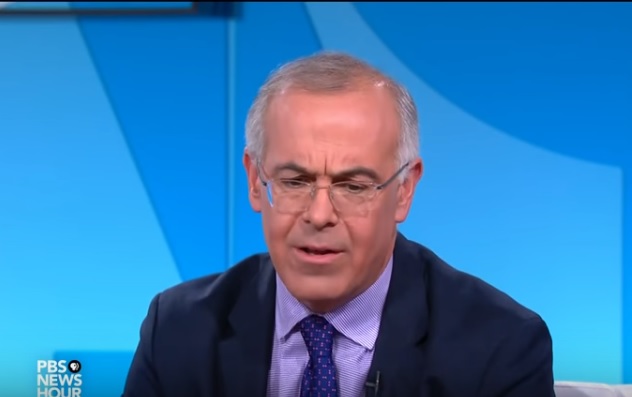 Columnist David Brooks is the house "conservative" of the New York Times which means he is currently busy consoling his fellow liberals over Donald Trump's election victory. Brooks, in his column today titled The View From Trump Tower but which could more accurately be labeled "The View From Ivory Tower," describes texting people "off the ledge." Ironically it is Brooks himself who leaps off that ledge at the end of his column due to his extreme Trump Derangement Syndrome.

If your social circles are like mine, you spent Tuesday night swapping miserable texts. Not all, but many of my friends and family members were outraged, stunned, disgusted and devastated. This is victory for white supremacy, people wrote, for misogyny, nativism and authoritarianism. Fascism is descending.

I was on PBS trying to make sense of what was happening while trying to text various people off the ledge. At one point I was opining about the results while a disbelieving text flashed across my phone: “Change It! Change It! CHAAAANGE IT!”

Those emotional reactions were a fitting first-night response to the greatest political shock of our lifetimes. Still, this is probably not the best mentality for the coming era.

Yes, David. Please proceed by painting us a picture of fake rationality:

In the first place, emotions like disgust don’t do justice to the complexity of Donald Trump’s supporters. The disgusted posture risks turning politics into a Manichaean civil war between the alleged children of light and the alleged children of darkness — between us enlightened, college-educated tolerant people and the supposed primitive horde driven by dark fears and prejudices. That crude and ignorant condescension is what feeds the Trump phenomenon in the first place.

Do you mean ignorant condescension such as you displayed exactly a week ago when you smugly mocked a "primitive horde" person for being sure that Trump would win the election?

A few weeks ago I met a guy in Idaho who was absolutely certain that Donald Trump would win this election. He was wearing tattered, soiled overalls, missing a bunch of teeth and was unnaturally skinny. He was probably about 50, but his haggard face looked 70. He was getting by aimlessly as a handyman.

I pointed to the polls and tried to persuade him that Hillary Clinton might win, but it was like telling him a sea gull could play billiards. Everybody he knows is voting Trump so his entire lived experience points to a Trump landslide. He was a funny, kind guy, but you got the impression his opportunities had been narrowed by forces outside his control.

How ennobling of you, David, to point out the error of his belief...except he turned out to be right and Mr. Enlightenment ended up wrong.

Brooks' solution for the impending Trump storm is to, get this, form a third party:

Donald Trump is probably going to make the G.O.P. the party of individual/closed. He’s going to start with the traditional Republican agenda of getting government out of the way, and he’s going to add walls, protectionism and xenophobia. That will leave people isolated in the face of the challenges of the information age economy, and it will close off the dynamism and diversity that always marked this crossroads of the nation.

The Democrats are probably going to be the party of social/closed. The coming Sanders-Warren party will advocate proposals that help communities with early education programs and the like, but that party will close off trade, withdraw from the world, close off integration with hyper-race-conscious categories and close off debate with political correctness.

Which is why I’ve been thinking we need a third party that is social/open. This compassionate globalist party would support the free trade and skilled immigration that fuel growth. But it would also flood the zone for those challenged in the high-skill global economy — offering programs to rebuild community, foster economic security and boost mobility. It would integrate the white working class and minority groups by emphasizing that we are all part of a single American idea.

Finally Brooks, who texted his ivory tower cohorts off the ledge, takes that flying leap himself with his money quote show closer:

Trump’s bigotry, dishonesty and promise-breaking will have to be denounced. We can’t go morally numb. But he needs to be replaced with a program that addresses the problems that fueled his assent.

After all, the guy will probably resign or be impeached within a year. The future is closer than you think.