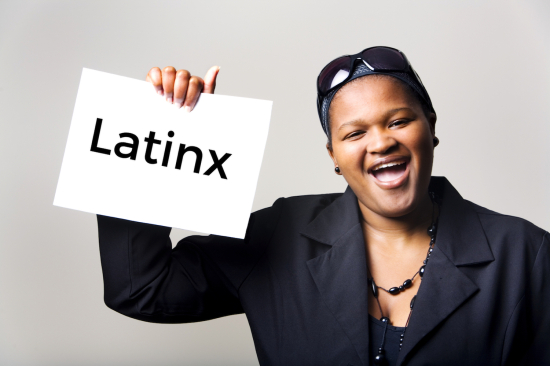 Has the death knell on the annoyingly awkward word "Latinx" finally, mercifully, hopefully been sounded by The Atlantic magazine? For anybody even a bit familiar with the Spanish language, "Latinx" just grates on the ears. Unfortunately, for the past few years it has been hyped by many PC types in the media including Vox and even Univision which should know better.

The good news is that liberal The Atlantic seems to have signaled to the rest of the left that it is time to send that word into permanent retirement. Perhaps rational liberals are starting to realize that "Latinx" is so annoying that it only serves to turn off people they are trying to persuade.

Why hasn't the term Latinx caught on the way African American did in the late 1980s?

African American became a cherished replacement for black right around when Jesse Jackson embraced it at a news conference, in 1988. Latinx, fashioned to get past the gender distinction encoded in Latino and Latina, has not replicated that success since its introduction, in 2014. It has been celebrated by intellectuals, journalists, and university officials, and even used by Senator and presidential candidate Elizabeth Warren. But in one poll, only 2 percent of America’s Latinos said they preferred the term.

Hmmm... Did Warren's use of "Latinx" mark the point at which her poll numbers began its steep decline? (Well, maybe it was "Medicare for All," but...)

Latino was enthusiastically taken up as an alternative to Hispanic around the same time African American came into use; the newer term solved the problem created by the fact that Hispanic, which centers language, refers to Spanish-speakers and thus excludes people of Brazilian descent. Latinx, too, purports to solve a problem: that of implied gender. True, gender marking in language can affect thought. But that issue is largely discussed among the intelligentsia. If you ask the proverbial person on the street, you’ll find no gnawing concern about the bias encoded in gendered word endings.

To black people, African American felt like a response to discrimination from outsiders, something black people needed as an alternative to the loaded word black. The term serves as a proud statement to a racist society. To Latinos, Latinx may feel like an imposition by activists. It’s also too clever by half for romance-language speakers accustomed to gendered nouns.

Also it is absurdly anglicized. It uses the English "X" at the end while saying it in Spanish comes off as the ridiculously long "Latin-equis."

Latinx may solve a problem, but it’s not a problem that people who are not academics or activists seem to find as urgent as they do. Now as always, imposing change on language is wickedly difficult from above, even change with wisdom in it.

Take note, Jorge Ramos...and hopefully everybody else on the left.