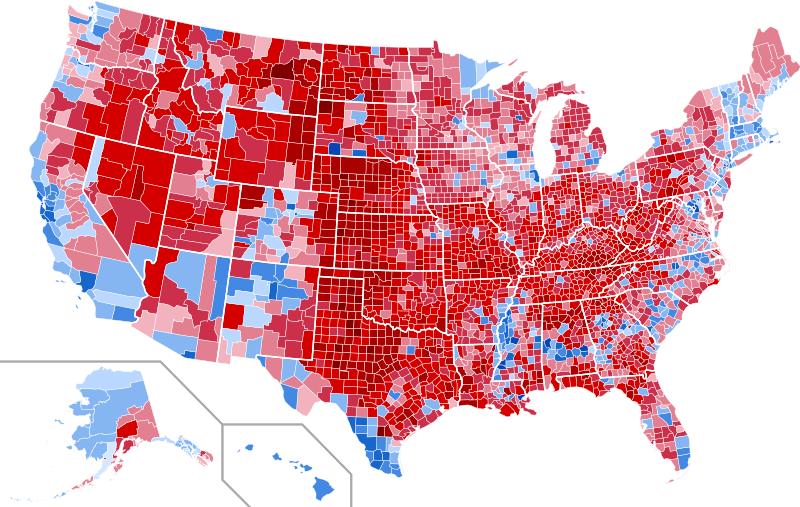 Imagine being able to play a liberal election god in order to fantasy shift several counties from one state to another to change the Electoral College votes just enough to hand the 2016 election victory to Hillary Clinton? That is what Washington Post columnist Philip Bump did by shifting the 10 most western Florida panhandle counties to Alabama as well as giving the 10 Upper Peninsula counties of Michigan to Wisconsin.

The result would have given the Electoral College votes in both Florida and Michigan to Hillary Clinton, enough for her to be declared the winner of the presidential election.

Bump's frustration with the U.S. Constitution was expressed in his Monday column, "Should the presidency really hinge on which state 20 counties happen to be in?"

Let us now join Bump in his fantasy playpen as he shifts counties around to make Hillary president while thinking he is somehow making some sort of point about how bad the Electoral College is:

This map shows the results of 2016 as they stood, with counties color-coded according to how strongly they favored either candidate.

Can you spot the difference? Well, in the second map, 10 counties in the western part of the Florida Panhandle are instead given to Alabama, extending that state’s coastline. Another 10 counties in the Michigan peninsula are merged onto Wisconsin.

With those two moves, Florida and Michigan suddenly turn blue and Clinton wins a 278 to 260 electoral college victory. (We’re ignoring the electoral vote Trump won in Maine since it doesn’t matter for our purposes here.)

Again, the only reason Clinton wins on this map is that state boundaries are shifted slightly. FiveThirtyEight has a tool allowing you to explore other shifts in state boundaries to see how the electoral vote would change. That article contains an important caveat: One can’t simply redraw state lines without assuming there would similarly be changes in how places would vote or where campaigns would target.

How about the caveat that if you lop some counties off of eastern North and South Dakota, Trump would still win them as well as Minnesota which he narrowly lost in 2016? The biggest caveat is there are many ways to play this silly county shifting game and it still doesn't argue against the wisdom of the founders in establishing the Electoral College. However, Bump's argument against the Electoral College is also that the country "looks" different now than it did at the beginning of the republic.

Bump concludes with a flippant whine:

To be somewhat flip: Is the location of Florida’s state line on the Gulf Coast really a critical determinant in who is handed the immense power of the presidency?

Yes, you too can play county shift.. Can you give even more 2016 electoral votes to Trump by shifting counties from one state to another? And will you also use it to make the silly case for abolishing the Electoral College?