If you have been paying attention to the book tour by former president Bill Clinton and author James Patterson plugging their novel, you are probably most likely to remember the contentious Today show interview conducted by NBC's Craig Melvin in which Clinton was pressed on the matter of sexual harassment.  However, almost lost in this controversy is their novel which they supposedly wrote together, The President Is Missing.

Fortunately a devastatingly funny review of the book was written by Anthony Lane of The New Yorker, “Bill Clinton and James Patterson’s Concussive Collaboration.” No matter what you think of the novel itself, you are sure to be entertained by the review whose subtitle reveals what else is also missing: “The President Is Missing​​​​​​ contains most of what you’d expect from this duo: politico-historical ramblings, mixed metaphors, saving the world. But why is there no sex”:

Bill Clinton, who can write, has hooked up with James Patterson, who can’t, but whose works 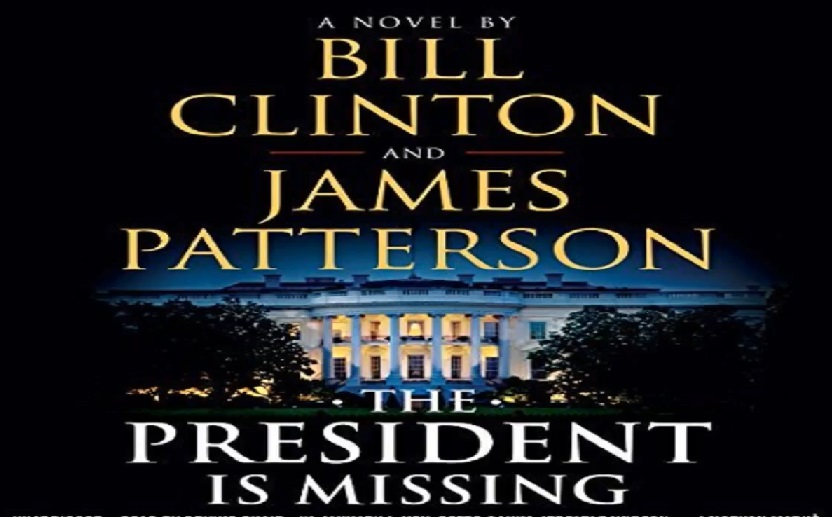 have sold more than three hundred and seventy-five million copies, most of them to happy and contented customers for whom good writing would only get in the way. This unlikely pact has resulted in “The President Is Missing” (Knopf and Little, Brown), which we must, not without reservations, describe as a thriller. Get a load of this: “The stun grenades detonate, producing a concussive blast of 180 decibels.” A hundred and eighty, mark you, and not a decibel less! If that isn’t thrilling, I can’t imagine what is.

The main character of the novel is President Jon Duncan who, in many ways, seems to resemble a certain President Clinton...except in one important detail:

The fingerprints of Clinton are all over that line. So where else can we find him in this book?

Not in the sex, that’s for sure, because there ain’t any. I’ve looked. It will be the first thing, let’s face it, for which hostile readers will hunt, but the forty-second President of the United States is smart enough to give any hint of carnality the widest of berths. There are teasers, naturally, but they lead nowhere. “I uncurl the gooseneck stem of the microphone so that it is taut, fully extended,” Duncan says, as early as the fourth page, yet the goosing goes no further.

As a collaborator, he’s the top. Barely can he sketch an outline without reaching for a sidekick. So numerous are his assistants that one has to ask, less in snotty disapproval than in ontological awe, how many of Patterson’s books are actually “his,” and to what extent he is a writer at all, as opposed to a trademark or a brand.

...everything you expect from Patterson is here, unadulterated, right down to the ritual mixing of the metaphors—“She had to bite her tongue and accept her place as second fiddle,” say, or “the sorrowful, deer-in-the-headlights look is long gone. The gloves have come off.”

...What fascinates me, above all, are the people of Pattersonia, that fabled land where sentences go to die. Its inhabitants carry and express themselves like eager extraterrestrials who have completed all but one module of their human-conversion course: “Volkov’s eyebrows flare a bit.” Or “Augie lets out a noise that sounds like laughter.” But isn’t.

...Most stirring of all is the emotional flatulence that blares out when the pressure is on: “A collective exhalation of air escapes from the room as the world’s foremost cyberops experts gasp in wonder at the empty screen.”

Although the novel is supposed to be a technological thriller, Lane reminds us that the authors are maybe not exactly cutting edge in this regard:

A computer, we learn, “changes from a black screen to fuzz, then a somewhat clear screen split in two.” Loveliest of all, and a reminder that both authors are revered senior citizens, is their desire to help those who are less digitally dexterous than themselves: “That word is trending, as they say on the Internet right now.”

And just as Leo Tolstoy switched gears at the end of "War and Peace" to give us a lecture on his silly theory of history (the only thing about that novel that your humble correspondent hated), so too does Clinton (via President Duncan) finish the novel in a similar manner:

...there’s the chutzpah with which Clinton (Patterson, I would suggest, may have stepped aside at this stage) waits until the twilight of the novel and then, like Tolstoy, squares his shoulders and expounds, in fiction-free form, his politico-historical thoughts. The gloves come off the deer. It’s notionally Duncan who is speaking, addressing Congress, but we know whose noble words he is declaiming. “Today it’s ‘us versus them’ in America. Politics is little more than blood sport,” he warns. Yet the man does not despair. Things could improve. He still sees the city upon the hill. “I want the United States to be free and prosperous, peaceful and secure, and constantly improving for all generations to come.” Amen.

Even if your opinion of the Clinton-Patterson novel is not very high, the fringe benefit is that at least it has inspired one of the funniest book reviews in a long time.