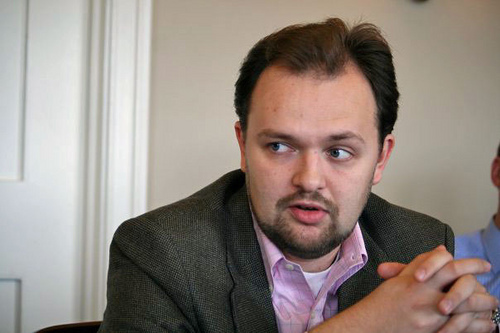 The New York Times and the Washington Post are chock full of "conservative" columnists who reflect the lack of political diversity in their newsrooms by being united in their opposition to Donald Trump. However, of all these "conservatives," there is one with the saving grace of at least being comically entertaining in that he consistently provides hilariously wrong predictions about Trump. He is Ross Douthat who is sort of a monastic Mini-Me version of his Times colleague David Brooks.

So just how wrong are Douthat's predictions? Let's just say they are in the category of Bob Shrum "Curse" wrong. And the funniest thing about Douthat is that no matter how many times he seems to swear off making predictions that make him look foolish...he always returns to make yet more foolish predictions. He just can't help himself.

Let us go back to the start of Douthat's Trump cycle bad predictions to August 1, 2015 in which he predicts that Donald Trump's candidacy will prove to be a political blessing for Jeb Bush:

But among Trump’s potential beneficiaries, the man most likely to be indebted is Jeb Bush. A few months ago, Jeb looked like the weakest of front-runners: The field was deep, his own poll numbers were lackluster, and he was facing two candidates in particular – Marco Rubio and Scott Walker – who seemed just as capable of uniting the party, more appealing to the average Republican voter, and more compelling as general election candidates than another Bush dynasty.

Walker and Rubio are still there, and Jeb’s weaknesses remain. But Trump has come bearing the former Florida governor several gifts.

Such as your very special gift for false prophecy, Ross? Okay, you're on a roll so continue being entertainingly wrong on how helpful Trump was for Jeb Bush:

First, his sudden prominence sets up exactly the kind of stylistic contrast that Jeb needed: He and the Donald are now the two most famous names in the race, they’re occupying opposing poles (populist/establishment, raffish/respectable) in a way that makes Jeb look like the safest harbor for anyone freaked out by Trump’s success, and the longer Trump polls well the less attention (and, perhaps, fund-raising dollars) there will be for more plausible challengers.

Douthat goes on and on about how Trump will end up boosting the candidacy of Jeb Bush.

A few weeks later, on August 29, it wasn't really a question for Douthat about if Trump loses but how he loses:

Because he knows Wall Street, and because he doesn’t need its money to campaign, it seems like he could actually fight his fellow elites and win.

He won’t, of course, but it matters a great deal how he loses. In a healthy two-party system, the G.O.P. would treat Trump’s strange success as evidence that the party’s basic orientation may need to change substantially, so that it looks less like a tool of moneyed interests and more like a vehicle for middle American discontent.

In an unhealthy system, the kind I suspect we inhabit, the Republicans will find a way to crush Trump without adapting to his message. In which case the pressure the Donald has tapped will continue to build — and when it bursts, the G.O.P. as we know it may go with it.

Of course Trump won't win. As Douthat predicted, it is all a matter of how he loses.

A couple of months later, on October 24, Douthat had a new insight. Gone was his happy prediction for Jeb Bush and, of course, Trump would never have a chance. His new crystal ball front runner was Marco Rubio:

No major party has ever nominated a figure like Trump or Carson, and I don’t believe that the 2016 G.O.P. will be the first.

...That leaves Jeb! and Marco Rubio. But Jeb’s campaign has been one long flail.

...So that leaves Rubio. And unlike all the rest, it’s surpassingly easy to imagine the Florida senator as the nominee.

So now Jeb! and, of course, Trump are gone but Rubio is definitely the one. Absolutely.

At the beginning of the new year, on January 2, 2016, Douthat had an epiphany: he could have been (GASP!) a bit wrong in his predictions:

...this year, like almost every pundit in America, I have one mistake that overshadows all the others, one confession that makes my other faults seem venial by comparison.

Really? You don't say. However, don't worry. Douthat's insight is quite fleeting since he quickly relapses with this:

Of course I’m not completely humbled. Indeed, I’m still proud enough to continue predicting, in defiance of national polling, that there’s still no way that Trump will actually be the 2016 Republican nominee.

Less than a week later, on January 7, the power prognosticator told us How Trump Loses starting with this assurance:

Donald Trump isn’t going to be the Republican nominee.

Okay, we get it. However, on January 28 Douthat seems to have lost faith in his sure thing candidate: Why Isn't Marco Rubio Winning?

Finally we come to the first of the primary contests on February 1 with the Iowa caucuses where Trump came in behind Ted Cruz. This caused Douthat to triumphantly tweet to the world just how right he was all along.

Yes, there was great gloating in the Douthat cubicle. However, by Super Tuesday it suddenly hit Douthat in his March 1 column that he could have again been wrong about Trump:

...it’s entirely possible that Trump could clear the delegate threshold while continuing to win just 30 to 35 percent of the vote.

I was once certain that this wouldn’t happen, because it would require too many candidates to stay in for too long with too little chance at victory. And yet that’s what has been delivered thus far...

Okay, so Douthat was wrong about there being no chance that Donald Trump could be nominated. However, his fate in the general election was so absolutely assured that by October 19 the only real question is what kind of post-election scenario will result from his defeat:

Finally Douthat had a second epiphany on the last day of 2016 and confessed the errors of his predictive ways:

In 2015 I underestimated the man himself: Before he descended the Trump Tower escalator into history, I had no idea that he had the savvy, the discipline, or the stamina to run an effective populist campaign.

By the time the actual primary voting began, though, I had a clear-enough handle on the nature of his populist appeal. What I misjudged in 2016 wasn’t Trump; it was the strength of the institutional forces standing between him and the presidency.

Which was odd, because I had always imagined that I saw those institutions’ flaws with a cold-eyed clarity. I am a conservative who has long regarded the Republican Party as a sclerotic mess, a member of the media elite with a relatively low opinion of the media, an Ivy-educated meritocrat who often holds meritocratic liberalism in contempt.

And you are a pundit with an even worse record in punditry than Bob Shrum. The good news is that after making a fool of himself by making laughably erroneous predictions, Ross Douthat has probably learned his lesson and will never again tempt being mocked by the fates ever again. And he did hold off making any more predictions...for a little over a month until February 11 when he could stand it no longer and played the prognosticating fool yet again:

The peak of Donald Trump’s presidency, so far and perhaps forever, happened before he became the president. It was the deal he struck with Carrier, the Indiana air-conditioning company, to keep a factory open and jobs in the United States. No moment was so triumphantly Trumpian; nothing has gone as well for him since.

Right. At just three weeks into the Trump presidency we have reached peak Trump. It's an absolute fact because of Ross Douthat's amazing crystal ball that can clearly see Trump's entire term of office. Oh, and is peak Trump like his ceiling? To paraphrase you, Ross: