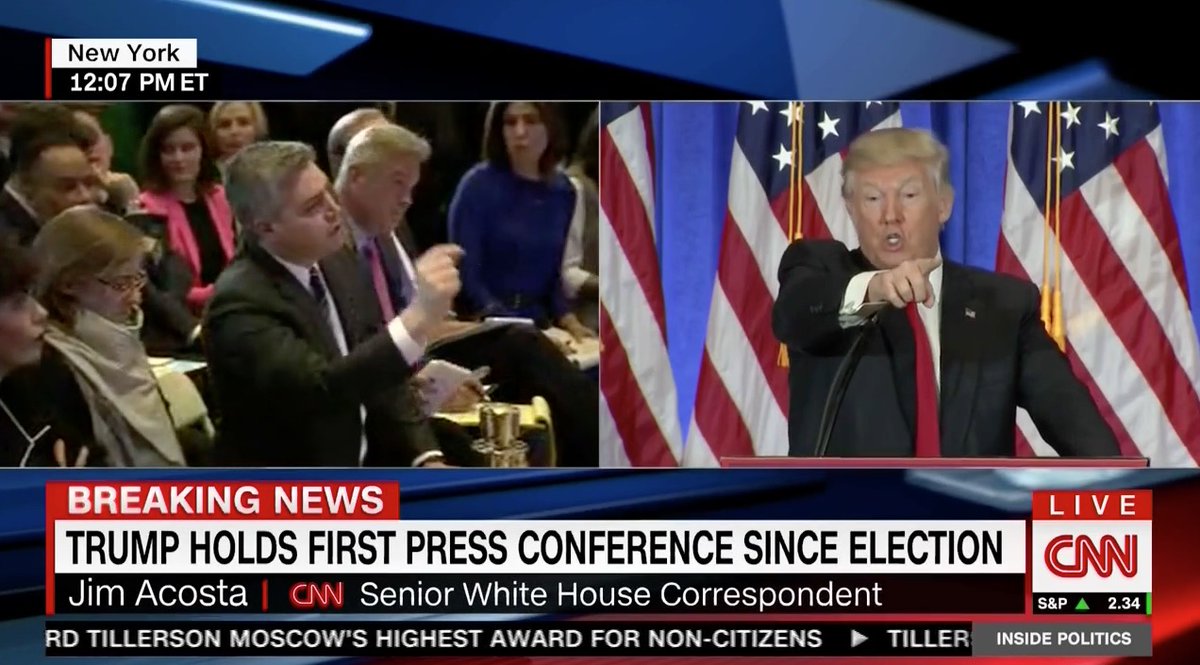 So who has a bigger headache today: Margaret Sullivan of the Washington Post or CNN's Jim Acosta?

Last week, media columnist Sullivan requested that the term "fake news" be retired and today President-elect Donald Trump threw that term against Acosta when he shut him down during his press conference.  At the press conference "fake news" was used 10 times thus dashing the hopes of the mainstream media folks that the now toxic term be terminated. Look for "fake news" to be thrown up against the MSM again and again over the next few years starting with today. Here is a compendium of that term as used today starting with incoming White House press secretary Sean Spicer:

The fact that BuzzFeed and CNN made the decision to run with this unsubstantiated claim is a sad and pathetic attempt to get clicks. The report is not an intelligence report, plain and simple. One issue that the report talked about was the relationship of three individuals associated with the campaign. These three individuals; Paul Manafort, Michael Cohen, and Carter Page.

Carter Page is an individual who the president-elect does not know and was put on notice months ago by the campaign. Paul Manafort has adamantly denied any of this involvement and Michael Cohen, who is said to have visited Prague in August and September did not leave or enter the United States during this time. We asked him to produce his passport to confirm his whereabouts on the dates in question and there was no doubt that he was not in Prague.

In fact, Mr. Cohen has never been in Prague. A new report actually suggests that Michael Cohen was at -- at the University of Southern California with his son at a baseball game. One report now suggested apparently it's another Michael Cohen. For all the talk lately about fake news, this political witch hunt by some in the media is based on some of the most flimsy reporting and is frankly shameful and disgraceful.

Next to bring up "fake news" at the press conference was Vice-President-elect Mike Pence:

You know, I have long been a supporter of a free and independent press and I always will be. But with freedom comes responsibility. And the irresponsible decision of a few news organizations to run with a false and unsubstantiated report, when most news organizations resisted the temptation to propagate this fake news, can only be attributed to media bias and attempt to demean the president-elect and our incoming administration and the American people are sick and tired of it.

...But I want to thank a lot of the news organizations for some of whom have not treated me very well over the years -- a couple in particular -- and they came out so strongly against that fake news and the fact that it was written about by primarily one group and one television station.

...I saw the information; I read the information outside of that meeting. It's all fake news. It's phony stuff. It didn't happen. And it was gotten by opponents of ours, as you know, because you reported it and so did many of the other people. It was a group of opponents that got together -- sick people -- and they put that crap together.

...Well, you know, President Putin and Russia put out a statement today that this fake news was indeed fake news. They said it totally never happened.

Most notably, Trump used that term when he shut down Jim Acosta:

ACOSTA: Can you state...

TRUMP: You are fake news.

Fake news was even brought up by one of the reporters:

REPORTER: ...published fake news and all the problems that we've seen throughout the media over the course of the election, what reforms do you recommend for this industry here?

TRUMP: Well, I don't recommend reforms. I recommend people that are -- that have some moral compass. You know, I've been hearing more and more about a thing called fake news and they're talking about people that go and say all sorts of things. But I will tell you, some of the media outlets that I deal with are fake news more so than anybody. I could name them, but I won't bother, but you have a few sitting right in front of us. They're very, very dishonest people, but I think it's just something we're going to have to live with.

There you have it. "Fake news" brought up 10 times in just one press conference. The MSM might have desperately hoped that the term they coined to explain away Hillary Clinton's election loss would now just fade away but apparently that term is now more prominent than ever with a good chance it will be invoked repeatedly for at least the next 4 years.