Please Dr. Drew! Could you please declare that Donald Trump is insane? No? Okay then how about bipolar or hypomanic? Hey, I barely know what the latter even means but at this point I'll take anything I can get.

That is what Don Lemon on CNN Tonight on Monday sounded like. No matter how much he tried to get Dr. Drew Pinsky to label Donald Trump as having some sort of personality disorder, Dr. Drew kept shooting him down, leaving poor Don disappointed. Here is the video of that encounter that is just begging to be satirized by a show that is un-PC enough to tackle the bizarre media echo chamber that has been shouting out the past week that Trump is loony.

DON LEMON: Donald Trump's numerous feuds have a lot of people wondering what he thinking? One prominent New Yorker is suggesting he might not be sane. Here to discuss is Dr. Drew Pinsky, the Internist and host of HLN's "DR. DREW". Dr. Drew, thank you so much for joining us. It's been, you know, an erratic few days for Donald Trump. And there's a lot of people asking what is going with him, you know, Former Mayor Michael Bloomberg said at DNC last week in support of Trump's opponent, Hillary Clinton, even before the events of the last few days. Listen, to this.

MICHAEL BLOOMBERG, FORMER NEW YORK CITY MAYOR: Let's elect a sane, competent, person with international experience. The bottom line is, Trump is a risky, reckless and radical choice and we can't afford to make that choice.

LEMON: So he's implying that Trump is not sane. Do you agree with that?

Yes, Dr. Drew! Do you agree with what almost all the MSM has recently been suggesting that Donald Trump is insane. For the sake of Don Lemon's sanity, please answer in the affirmative. 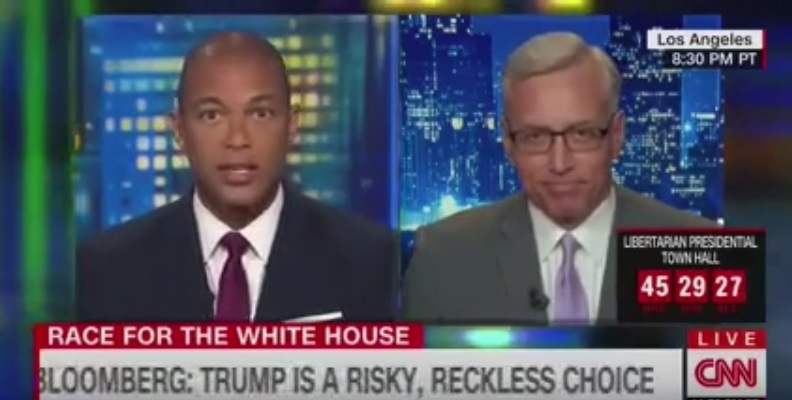 DR. DREW PINSKY: Well, listen, we have to look at what is insanity. He can be reckless and risky and not be insane, right. There's two definitions of insanity, one is legal definition. And the legal definition of insanity is somebody who is so out of it they don't know the difference between right and wrong. That is a very high standard for insanity. And very few people meet that standard. You're really not functioning when you're legally insane. Then there's clinically, insane medically, what is that mean, usually when we talk about insanity, we mean psychotic, hearing voices, hearing hallucinations. Again, have a thought to sort of disconnects you from reality. So I'm sorry Don, not insane.

Okay, if at first you don't succeed, try and try again so here goes...

LEMON: OK. No apologies necessary and, you know, it was Bloomberg who made the assertion. If he -- we've spoken about this before. I believe that you think he has narcissist tendencies. Is that always a bad thing in a leader?

Flat out insane didn't work but maybe we can get Trump declared to be an extreme narcissist.

PINSKY: No, it isn't always a bad thing with people want to label him with a narcissistic personality disorder. And that is a pretty tough, tough thing to do at a distance. But let me just talk to you, narcissism generally can be a good thing. I mean if you're an, you know, a fighter pilot, we want you to be narcissistic, we want you not to have fear in experience circumstances.

And so most political leaders have some, degree of narcissism that's should motivates them to go into these areas. I mean we've done research on this and it bears that out.

The question, though, is narcissism has a liability, and that's malignant narcissism where you lose empathy, feelings don't matter. Only you're, you know, a sort of point of view is all that matters, you know, at all times. And in that situation, usually you see people really can't function interpersonally so you look at their children, their marriages, and you just don't see the evidence of malignant narcissism in his kids certainly.

Now, I'd love to hear from its ex-wives. Maybe they know something that we haven't heard yet. But you just can't conclude it because his relationships are actually maintained and seem to be quite healthy.

LEMON: People throwing around a lot of terms about Donald Trump. Is that unfair to call someone who's a nominee of the Republican Party a sociopath?

PINSKY: Yes, it is unfair because sociopaths are usually tied up with illegal really, seriously a problems with criminal behavior. But, you know, you can be manipulative. You can be narcissistic and you could still do OK in life. But, again, your relationships usually have extreme pathologies a very difficult to raise healthy kids, very difficult to have sustained marriages if you're deep into narcissism.

Could you give me some big name terms that I don't understand to work with?

PINSKY: And by the way, although people wanted to call it narcissism, people are, like, hypomanic and bipolar at amongst that really have much more difficulty with running at the mouth and you got to wonder more about that than narcissism.

LEMON: You said bipolarism and what else hypomanic would you say?

PINSKY: Well hypomania. I'm not saying he is hypomanic. But I m saying everyone wants to label him with all these personality qualities. But, you know, when I pair -- hear people that are impulsive with their speech, I was worry about hypomania and bipolar types of conditions. I mean he has -- as he says he has boundless energy. Again, a little hypomania can be great.