When reading the hallowed pages of Foreign Policy magazine, one hardly expects to see harsh locker room language. How harsh? How about calling someone an "asshole" not only in the body of the article but in the title itself. But wait...there's more! Not only does FP writer Thomas Ricks call Barack Obama's foreign policy adviser an "asshole" but also "an overweening little schmuck." In any event you sort of know that this is not your typical FP magazine article the moment you read the title,  A stunning profile of Ben Rhodes, the asshole who is the president’s foreign policy guru: 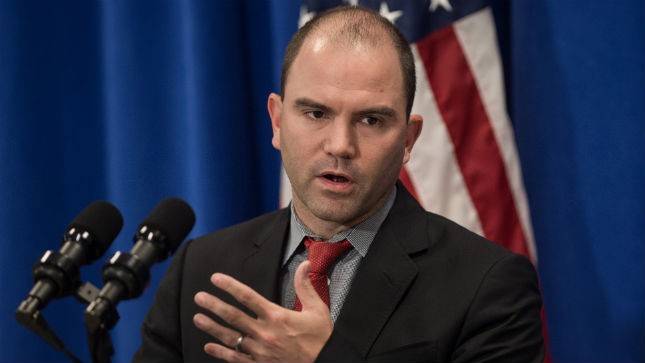 The profile of one Ben Rhodes running in Sunday’s New York Times Magazine is not unsympathetic, which makes it all the more devastating.

Perhaps the key sentence is this: “His lack of conventional real-world experience of the kind that normally precedes responsibility for the fate of nations — like military or diplomatic service, or even a master’s degree in international relations, rather than creative writing — is still startling.”

Rhodes comes off like a real asshole. This is not a matter of politics — I have voted for Obama twice. Nor do I mind Rhodes’s contempt for many political reporters: “Most of the outlets are reporting on world events from Washington. The average reporter we talk to is 27 years old, and their only reporting experience consists of being around political campaigns. That’s a sea change. They literally know nothing.”

Ouch! But wait! It gets even worse! Just keep in mind that Ricks, who formerly wrote for the Wall Street Journal and the Washington Post is hardly a conservative. (Foreign Policy was owned by The Washington Post Company, but is now with the former owners' Graham Holdings Company.)

Not only did he admit to voting for Obama twice but he had harsh things to say about the state of Texas in a NewsBusters story which makes his slam on Rhodes even more painful since it comes from a fellow liberal:

But, as that quote indicates, he comes off like an overweening little schmuck. This quotation seems to capture his worldview: “He referred to the American foreign policy establishment as the Blob. According to Rhodes, the Blob includes Hillary Clinton, Robert Gates, and other Iraq-war promoters from both parties who now whine incessantly about the collapse of the American security order in Europe and the Middle East.” Blowing off Robert Gates takes nerve.

I expect cynicism in Washington. But it usually is combined with a lot of knowledge — as with, say, Henry Kissinger. To be cynical and ignorant and to spin those two things into a virtue? That’s industrial-strength hubris. Kind of like what got us into Iraq, in fact.

The only piece of good news for Ben Rhodes in this article is that at least he can share some of the Ricks rage with Joe Biden and John Kerry:

Rhodes and others around Obama keep on talking about doing all this novel thinking, playing from a new playbook, bucking the establishment thinking. But if that is the case, why have they given so much foreign policy power to two career hacks who never have had an original thought? I mean, of course, Joe Biden and John Kerry. I guess the answer can only be that those two are puppets, and (as in Biden’s case) are given losing propositions like Iraq to handle.

Please allow your humble correspondent to give a bit of marketing advice to Foreign Policy magazine... You MUST put that article title on the cover of the hard copy version. If you do so I guarantee perhaps the best sales you ever had. I would definitely buy it and at some point in the future if I hear that Ben Rhodes plans to speak in my area, I would bring that edition of the magazine and very politely ask him to autograph it. I'm already thinking of the bucks to be made on eBay by selling that Ben Rhodes "asshole" issue with his signature on the cover.