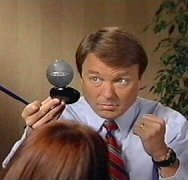 Are you putting me on, Jim?

Yeah, I'm talking to you, James Rainey, of the Los Angeles Times.

It seems that the Times columnist just can't figure out how the MSM missed out on reporting the John Edwards scandal story despite the fact that the L.A. Times was Gound Zero for media refusal to report on this matter even after the National Enquirer broke an important aspect of the story in Rainey's own backyard at the Beverly Hilton. First the entertaining money quote from Rainey in today's column:

After reading "Game Change," a sweeping new account of campaign 2008 by veteran journalists John Heilemann and Mark Halperin, a reader might wonder: How could the schmucks on the bus miss the operatic disintegration of Edwards' once widely admired partnership with his wife, Elizabeth?

It wasn't so much a matter of the "schmucks on the bus" missing out on the scandal as it was that the MSM willfully ignored the story even after it was reported on several times in the National Enquirer as was noted in the "Game Change" excerpt in New York Magazine:

...The mainstream media, yet again, was determinedly ignoring the Enquirer.

Yup. Absolutely no footwork performed in checking out the Enquirer stories, a consideration that the MSM would would also have extended to a conservative candidate involved in a scandal...NOT!

Perhaps Rainey would like your humble correspondent to contact his friend Jamie Masada, owner of the Laugh Factory on the Sunset Strip, to book him for a performance to deliver this comedy punchline (in bold):

There still appears to be a sizable minority in America who favors big news organizations at least in part for their broad ambitions, thoroughness, balance and sense of restraint.

But ain't it a shame when those highfalutin', old-school intentions get in the way of the basic mission -- delivering the audience a "Hey Martha!" scoop now and then with their breakfast cereal?

It seems the higher values and a healthy dose of old-fashioned incredulity (Could he really be that big a cad?) put America's most prestigious news organizations on the sidelines as presidential hopeful John Edwards embarked on an extramarital affair of epic audacity.

That's right, folks. Rainey actually expects us to believe that it was the "higher values" of the MSM that prevented them from reporting on the Edwards scandal. Rainey then disingenuously speculates on other reasons why the MSM refused to report on this scandal:

* A genuine admiration for Elizabeth made it impossible for many reporters to believe her husband could be that stupid and unfeeling, particularly after the recurrence of her cancer.

* Many Edwards campaign operatives served as master story killers, vehemently repeating their boss' attacks on "tabloid trash" because they really believed he had done nothing wrong. They didn't have to spin.

* Reporters recalled seeing and hearing signs of stress in the marriage (One told me this week she heard staffers call Elizabeth "the terrorist") but those were easily written off as the product of a struggling campaign and, especially, the strain of coping with her fatal cancer.

Rainey finally dares to intrude upon the real reason why the MSM ignored this story...and then immediately dismisses it as a possibility:

More than one commentator would suggest the media cut Edwards a break because they shared his liberal views. But it's hard to square that argument with the media's zestful pursuit of infidelity by Democrats like Bill Clinton and former New York Gov. Eliot Spitzer.

If Rainey had done just a wee bit of research which he also neglected to do when he got egg over his face when misreporting the Los Angeles ACORN story, he would have quickly discovered that the Bill Clinton scandal involving Monica Lewinsky was first reported by the Drudge Report on January 19, 1998 AFTER Newsweek trashcanned the Michael Isikoff story on this matter two days earlier. And why did Newsweek bury this story? Could it possibly have been due to (gasp) "shared liberal views?" Please don't tell this to Rainey.

Editors and producers lost most of the inclination they had to pursue the Edwards scandal once he lost the Iowa caucuses -- where victory had been seen as his only logical path to the Democratic nomination.

But the Enquirer would not let the story go away. Unburdened with the responsibilities of the mainstream press (Just what would Mike Huckabee do on healthcare?), it made sense to put a surveillance team on Edwards.

In July 2008, it caught the defeated, deflated candidate at the Beverly Hilton Hotel, where he arranged a secret meeting with his erstwhile mistress and their alleged love baby.

And yet even after the National Enquirer caught Edwards visiting his mistress and their child in Rainey's own backyard at the Beverly Hilton, his L.A. Times squelched any reporting on the scandal.  No known footwork was performed by the Times to investigate the Beverly Hilton incident. In fact, most of their energy was expended in muzzling any reportage of this story as reflected in this e-mail by L.A. Times editor Tony Pierce:

Because the only source has been the National Enquirer we have decided not to cover the rumors or salacious speculations. So I am asking you all not to blog about this topic until further notified.

The Times ban on reporting on the Edwards story wasn't lifted until August 7, 2008 when John Edwards was on the verge of revealing his affair on Nightline the next day. Perhaps Rainey might want to ask the Times blog editor Tony Pierce about the "higher values" that caused him to muzzle his own staff from reporting on the Edwards scandal.
It didn't seem that James Rainey could embarrass himself any worse than he did when he reported from only the ACORN side of the story in November but he certainly made a bold attempt at it in today's column. And I certainly have faith in Jim continuing to cover his face with big helpings of egg for our comedic entertainment.
2008 Presidential Los Angeles Times James Rainey Elizabeth Edwards