The liberal media just can’t get enough of Texas state senator Wendy Davis, and neither can Jeff Zeleny of ABC News. Zeleny interviewed the now-famous abortion filibusterer for the ABC News/Yahoo! News Power Players blog, and the conversation was loaded with softballs and fluff. Among the softballs was Zeleny’s fascination with the pink running shoes Davis wore during her filibuster. In fact, the prominence of Davis’s footwear in the interview could be gleaned from the title of the entry: “A Walk in Wendy Davis’s Shoes: The Woman Behind the Long Filibuster.” [Watch the video and read the accompanying article here.]

It only took Zeleny two questions to reach the topic of Davis’s sneakers: “Why did you decide to wear your running shoes? Let’s take a look at those, they’ve kind of been rocketing around the Internet.” As Davis took the shoes out of her bag and placed them on the table in front of her, Zeleny muttered, “Wow,” as if he had just been shown a rare diamond.


Having seen what he called “probably the most famous shoes in politics,” was Zeleny ready to move on to more serious questions? Nope. He had to verify the color of the shoes, asking Davis if they were indeed pink. She replied, “I would call it a pink, or a salmon pink, yeah.”

Having confirmed that the shoes were pink, Zeleny still wasn’t done with them: “But you’re also a runner. I mean, these are legitimate running shoes.” Keep in mind that this man is a senior Washington correspondent, not a style editor. 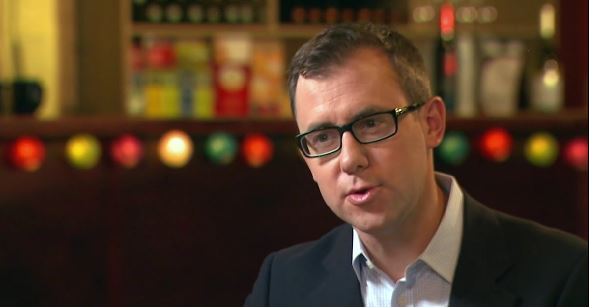 Once the shoes had been thoroughly discussed, Zeleny moved to a more important question -- how did Davis take care of her bodily functions while she was standing on the Senate floor for 11 hours? Zeleny pressed her on whether she used a catheter, but she wouldn’t say.

When the interview finally turned serious, Zeleny didn’t provide any skepticism or play devil's advocate. He merely served up an opportunity for Davis to tell her life story: “How does a young woman from Fort Worth end up at Harvard Law School?”

Later in the interview, Zeleny touched on the friction between Davis and Texas Governor Rick Perry. But rather than ask if Perry had a point in his criticism of Davis, Zeleny teed up the senator to express outrage: “The front page of the Fort Worth Star-Telegram is featuring the back-and-forth with Governor Perry and you. He has made this very personal against you. Is that offensive?”

Davis slammed Gov. Perry and Texas Republicans for disregarding moderate voters and catering to the far right. Zeleny was evidently impressed, and used her forceful answer as an opportunity to push her to run for governor: “That sounds like a good campaign ad against Governor Perry. Will you run?”

Of course, Davis did not say whether she would run, saying only that she was focused on the upcoming special session.

When asked if she believed the bill she filibustered will eventually pass, Davis replied, “I just – refuse to say I believe it’ll happen. I’m an eternal optimist, I believe in people, I believe in the power of democracy and I’m gonna fight with every fiber I have to keep it from passing.”

Here was a golden opportunity for a critical followup: Ms. Davis, if you believe in the power of democracy, why do you want to prevent a majority of the democratically-elected state senate from passing a law? A democratic legislature is all about the rule of the majority. Unfortunately, Zeleny let that response float by without objection.

This interview stood in stark contrast to numerous interviews with conservatives that have been posted to this blog in the past. In recent months, Reince Priebus, Karl Rove, and Sen. Jeff Sessions (R-Ala.) have all faced tough questioning from ABC News correspondents over their actions and policy positions. But Wendy Davis, a liberal hero, was allowed to skate by with a puffy interview.

Zeleny ended his friendly chat with Davis by returning, yet again, to those famous pink sneakers, asking if she would filibuster the abortion bill once more: “You’re gonna put these shoes on again?”

Imagine if Obama had been wearing sneakers.

Below is a transcript of the interview:

JEFF ZELENY: A week ago, no one knew State Senator Wendy Davis outside of Ft. Worth. Now you’ve become a national and international name.

WENDY DAVIS: I never could have predicted the enthusiasm, the energy, the courage of people in Texas who showed up at the capitol to exercise their voices in this very important conversation.


ZELENY: Why did you decide to wear your running shoes? Let’s take a look at those, they’ve kind of been rocketing around the Internet.

DAVIS: They’ve gained a fame all their own. (Puts shoes on table)

DAVIS: At the last minute I was running out of my apartment, I thought maybe I would need something with a little more support, so I grabbed these on the way out the door. These are actually my running shoes.

ZELENY: I mean these are the shoes now – probably the most famous shoes in politics. And is this a pink –?

DAVIS: I would call it a pink, or a salmon pink, yeah.

ZELENY: But you’re also a runner. I mean, these are legitimate running shoes.

DAVIS: They are legitimate running shoes. They’re dusty from the trail around Lady Bird Lake.

ZELENY: How did you handle the personal side of this?

DAVIS: I will just say I was equipped to take care of having to stand on the floor for a long time.

ZELENY: With a catheter, is that right?

ZELENY: I apologize for my rudeness there, but I think I read in the Fort Worth Star-Telegram that you came prepared for –

DAVIS: I did. I came prepared.

ZELENY: The journey that you made to the Senate floor in Austin actually passed through this very room here at the Stage West Theater here in Fort Worth. How does a young woman from Fort Worth end up at Harvard Law School?

DAVIS: It wasn’t a journey that I really planned. I was living as a young single mom. I was 19 when I was divorced, and my daughter was a year old, and I waited tables here three to four nights a week for several years while I was trying to support myself and my daughter and the day I got that acceptance at Harvard Law School was an unforgettable day.

ZELENY: Now you have become central to this fight here in Texas. The front page of the Fort Worth Star-Telegram is featuring the back-and-forth with Governor Perry and you. He has made this very personal against you. Is that offensive?

DAVIS: You know, what’s offensive to me is that he’s made this very personal to Texans overall. He’s awfully fond of talking the talk of small government but this is big government intrusion and it’s very unfortunate and sad that people’s personal health and safety are at risk for his political purposes.

ZELENY: What has this shown you about the political views of Texas? I mean, is this an example of Texas turning purple and blue because of the reaction or is this a sign that Texas is still deep red because of the legislation?

DAVIS: I think Republicans have functioned in the primary political arena for a long time here. They haven’t had real challenges in general elections and they think they can completely disregard the voter who votes in the middle of the football field. They think they can stay over here on the 10-yard line far to the right. But the fact is that most Texans, most people in our country actually, are really more in that 50-yard-line range. It’s Rick Perry and his political aspirations and I think they’re growing weary of being used as a pawn in that game.

ZELENY: That sounds like a good campaign ad against Governor Perry. Will you run?

DAVIS: I am going to begin working very hard with my Senate Democratic colleagues and with citizens across the state and do everything I can to focus my energies and efforts on this special session.

ZELENY: Do you believe that SB 5 will become law?

DAVIS: I just – refuse to say I believe it’ll happen. I’m an eternal optimist, I believe in people, I believe in the power of democracy and I’m gonna fight with every fiber I have to keep it from passing.

ZELENY: Will you have to filibuster again?

DAVIS: I don’t know that we’ll have that opportunity again. But I can tell you this: we are up for the fight.

DAVIS: If I have to, I will, most certainly.