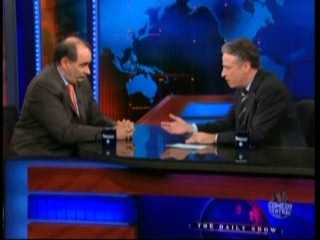 Speaking to President Obama's senior advisor on "The Daily Show," the Comedy Central star was in the middle of a rather interesting discussion when he surprisingly said, "It's clear that this administration believes that government can have a stronger hand in regulating Wall Street, in regulating energy, in doing these things."

"But, has government during this time proved itself competent? And are our only two choices sort of an incompetent bureaucracy that doesn't quite regulate properly or free market anarchy?" he asked.

When Axelrod predictably tried to blame all the problems in the country on the previous administration's supposed lack of regulation and oversight, Stewart wasn't having any of it (video follows with transcript and commentary, relevant section at 1:50):

JON STEWART, HOST: It's clear that this administration believes that government can have a stronger hand in regulating Wall Street, in regulating energy, in doing these things. But, has government during this time proved itself competent? And are our only two choices sort of an incompetent bureaucracy that doesn't quite regulate properly or free market anarchy? Before you can make the case that this administration and government can effectively regulate shouldn't they, you know, the MMS case makes a pretty clear point that the regulatory system is somewhat broken, and you guys had a chance to...

DAVID AXELROD, SENIOR OBAMA ADVISOR: The answer Jon is not to abandon the notion that there have to be rules and oversight. The answer is to make it, to make it work better. There's a long legacy there at MMS, and frankly at other agencies of government because the last administration wasn't really interested in regulating.

STEWART: But why then, why not then go in and really, with the urgency? You know, the fear is the government is not agile enough, is not urgent enough to deal with things like a catastrophic oil spill.

AXELROD: There is, there is no doubt that in retrospect we would have liked to move faster on the MMS situation, but understand that we were also dealing with the economic crisis, and, and, and, and, and the wars, and a whole range of issues, and we, that was, that was a defect that we're correcting and moving aggressively to correct now. But the answer isn't to walk away from it. I think we tested the proposition of what no regulation means. What you get, you get the leak, you get the mine disaster in West Virginia, and you get an economic crisis. And everybody recognizes that government has to play a role. It shouldn't be an oppressive role, but there has to be some firm oversight and some rules of people respond to. These, you know, it's pretty clear the oil industry is not going to regulate itself.

STEWART: But do you think, I guess my point is before you have the opportunity, before you can earn the ability to go in and, and, and do that, don't, don't we have to show a certain baseline level of competence.

Wait until you hear what Axelrod used as an example of the Obama administration's competence:

AXELROD: Yeah, well I mean, I would argue that we have shown a baseline level of competence. The thing is that when you show a level of competence, it doesn't become a story. It only becomes a story when there are problems. Take the H1N1 flu for example. We jumped on that quickly. Some people criticized us for being too aggressive on it, but I think we averted a larger public health disaster.

Yeah, they sure did a GREAT job with that swine flu scaring the heck out of people over what turned out to be nothing just like in the 70s.

If that's what this White House considers competence, we're REALLY in trouble.

As for Stewart, that's one heckuva good job by a comedian. Makes the clowns at MSNBC look like the real jokers, doesn't it?

What really made this so marvelous is that he went in a direction most journalists today would eschew at all costs.

Consider that today's liberal media members view industry as the enemy that needs to be vigorously constrained by government, but they never ask if government is competent enough to do it.

Obviously this oil spill has to raise some uncertainty in this regard, and Stewart marvelously challenged a senior administration official to explain why this White House is up to the task.

On the other hand, he better be careful with this line of questioning or he just might get thrown off the liberal reservation as Keith Olbermann recently was when he dared criticize Obama.

Maybe that would be a good thing for Stewart who then would really be free to ask the questions of this administration most so-called journalists won't.