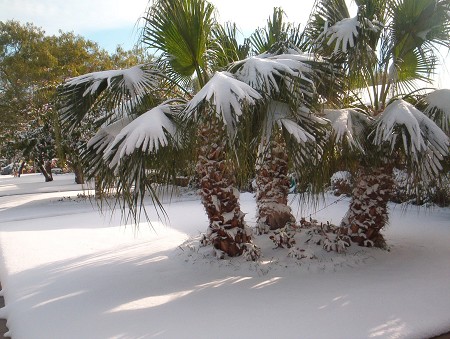 The blogosphere was abuzz Wednesday evening with a new study indicating that "global warming will stop until at least 2015 because of natural variations in the climate."

New York Times environment reporter Andrew C. Revkin wrote an article about this Thursday, although it appears mostly to point out to his readers that this hardly disproves man is destroying the planet by burning fossil fuels.

Before we get there, here are the pertinent facts reported by the British Telegraph Wednesday (emphasis added throughout):

Researchers studying long-term changes in sea temperatures said they now expect a "lull" for up to a decade while natural variations in climate cancel out the increases caused by man-made greenhouse gas emissions.

The average temperature of the sea around Europe and North America is expected to cool slightly over the decade while the tropical Pacific remains unchanged.

This would mean that the 0.3°C global average temperature rise which has been predicted for the next decade by the UN's Intergovernmental Panel on Climate Change may not happen, according to the paper published in the scientific journal Nature.

Fascinating. However, there was a catch:

Noel Keenlyside of the Leibniz Institute of Marine Sciences, Kiel, Germany, said: "The IPCC would predict a 0.3°C warming over the next decade. Our prediction is that there will be no warming until 2015 but it will pick up after that."

He stressed that the results were just the initial findings from a new computer model of how the oceans behave over decades and it would be wholly misleading to infer that global warming, in the sense of the enhanced greenhouse effect from increased carbon emissions, had gone away.

The IPCC currently does not include in its models actual records of such events as the strength of the Gulf Stream and the El Nino cyclical warming event in the Pacific, which are known to have been behind the warmest year ever recorded in 1998.

Today's paper in Nature tries to simulate the variability of these events and longer cycles, such as the giant ocean "conveyor belt" known as the meridional overturning circulation (MOC), which brings warm water north into the North East Atlantic.

Anybody smell a rat? After all, some of the skepticism concerning the anthropogenic global warming theory (AGW) is how heavily it depends on long-range forecasts made from computerized climate models.

If such models are unreliable as it pertains to warming, should we get excited when one predicts cooling?

Such was the impression of Roger A. Pielke Jr., a professor of environmental sciences at the University of Colorado, Boulder, who wrote Wednesday (emphasis added):

I am sure that this is an excellent paper by world class scientists. But when I look at the broader significance of the paper what I see is that there is in fact nothing that can be observed in the climate system that would be inconsistent with climate model predictions. If global cooling over the next few decades is consistent with model predictions, then so too is pretty much anything and everything under the sun.

This means that from a practical standpoint climate models are of no practical use beyond providing some intellectual authority in the promotional battle over global climate policy. I am sure that some model somewhere has foretold how the next 20 years will evolve (and please ask me in 20 years which one!). And if none get it right, it won't mean that any were actually wrong. If there is no future over the next few decades that models rule out, then anything is possible. And of course, no one needed a model to know that.

Interesting. On the other hand, what this study did was incorporate elements climate realists have pointed out for years have been largely ignored by alarmists and the IPCC such as the Gulf Stream and El Nino events. This appears to give some value to this study regardless of its reliance upon models.

However, we should not just cherry-pick the parts of this study that appear to disprove AGW, for this clearly was not the authors' intent:

Such a cooling could temporarily offset the longer-term warming trend from increasing levels of greenhouse gases in the atmosphere.

Revkin also made this clear to his readers (emphasis added, h/t NBer dahliatravers):

One of the first attempts to look ahead a decade, using computer simulations and measurements of ocean temperatures, predicts a slight cooling of Europe and North America, probably related to shifting currents and patterns in the oceans. [...]

The authors stressed that the pause in warming represented only a temporary blunting of the centuries of rising temperatures that scientists have projected if carbon dioxide and other heat-trapping gases continue accumulating in the atmosphere.

I agree. They did.

As such, what this points out is the need for folks on both sides of this debate to not jump on every new study as evidence that their side is right, for it not only makes people look foolish, but does not help the public better understand the science.

Coincidently, another such episode occurred earlier this week when NASA released the following:

A cool-water anomaly known as La Niña occupied the tropical Pacific Ocean throughout 2007 and early 2008. In April 2008, scientists at NASA's Jet Propulsion Laboratory announced that while the La Niña was weakening, the Pacific Decadal Oscillation-a larger-scale, slower-cycling ocean pattern-had shifted to its cool phase. [...]

Unlike El Niño and La Niña, which may occur every 3 to 7 years and last from 6 to 18 months, the PDO can remain in the same phase for 20 to 30 years. The shift in the PDO can have significant implications for global climate, affecting Pacific and Atlantic hurricane activity, droughts and flooding around the Pacific basin, the productivity of marine ecosystems, and global land temperature patterns.

As you might imagine, tom toms were being banged all around the rightosphere concerning this report. However, as a result of some queries, I was able to determine that this might be much ado about nothing. Roy Spencer of the University of Alabama, Huntsville, e-mailed (with permission):

I wouldn't read too much into this...the monthly PDO values suggest that the current PDO event is weaker than at least 4 others that have occurred in the last 20 years...it is certainly not unusual in the sense of being either strong or persistent.

I concur. Also, it's the Atlantic MDO, now in a very strong warming phase that shows no signs of ending soon, that seems to have more influence on medium-term temperature trends than the PDO.

In the end, despite what alarmists like Nobel Laureate Al Gore claim, this debate is far from over, and scientists around the world are working tirelessly to answer climate questions whose answers are still largely unknown. As a result, and given the dollars not just being thrown at this issue, but also at stake, we can expect "groundbreaking" studies to be released on almost a weekly basis for years to come.

In order to best disseminate such reports, it is incumbent upon responsible journalists -- yes, even those in the blogosphere -- to dissect such studies, and seek some qualified opinions before jumping on each one that appears to be the global warming missing link.

By doing so, we not only increase the level of the debate, but we also avoid filling the information chamber with a lot of irrelevant white noise that acts to further confuse the public while moving us away from the answers we seek.

Furthermore, until we can establish any predictive ability of climate models, all studies relying on them should be taken with a grain of salt, even ones that appear on the surface to buttress the realist position.

After all, on Saturday, when temperatures finally got close to normal where I live in Northern California, I was about to finalize the annual opening of my swimming pool, which, as an aside, is already almost two months later than normal due to all this "global warming" we've seen this year. To help me with my decision, I logged onto a couple of well-known weather websites which informed me that the 80s I was experiencing Saturday would be short-lived, another cooling trend would begin Monday, and temperatures would be unseasonably low for the next ten days.

As a result, I postponed opening my pool only to find the new forecast predicting very warm temperatures this weekend, and back into the 80s by next week.

With this in mind, I'll start trusting long-range climate forecasts when meteorologists can accurately tell me what the weather will be five days from now!

*****Update. As a post facto aside, I wanted to pose a question: Is it possible the alarmists realize that the postponement of solar cycle 24, and the current solar inactivity, will indeed result in a cooling pattern of undetermined length requiring some forward explaining as a red herring?

As NBer upcountrywater pointed out in his comment on this subject, sunspot activity has almost completely ceased. Those that study such things believe we could be entering a very cold period, and don't know how many years this will last. As such, could it be the alarmists are beginning to recognize this, and need to start proferring explanations for this cooling that don't interfere with AGW? Think about it.