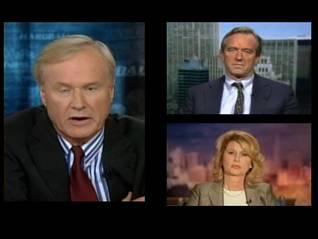 I’m not sure what derangement syndrome Robert F. Kennedy, Jr. is suffering from, but on Friday’s “Hardball,” he actually blamed the 9/11 attacks at the World Trade Center on President Reagan’s rollback of CAFE standards in 1986.

To set this up, Kennedy and conservative talk show host Melanie Morgan were invited on to discuss profits that are currently being made surrounding “solutions” to anthropogenic global warming.

You know, in 1979, we had fuel economy standards that worked. We went from 18 miles per gallon to 27.5 miles per gallon in six years. And we reduced oil imports from the Mideast by 87 percent. Our economy incidentally, Chris, grew by 27 percent during that period.

If we had left those fuel economy standards intact, Ronald Reagan rolled them back, we would not have had to import one drop of oil after 1986. Think of what that would have done to our history. The World Trade Center would probably still be standing. We would have avoided two Gulf Wars. We would be a prosperous nation. We wouldn’t be bound down in this Mesopotamian quagmire that has destroyed our reputation and destroyed the reputation of democracy across the globe.

Unbelievable. Now, to put this in perspective, one must understand a little bit of the history regarding Corporate Average Fuel Economy standards. According to the National Highway Traffic Safety Administration:

So, the standards were reduced for four years – during a period when oil prices had plummeted as a result of a huge glut mind you – then returned to 27.5 mpg in 1990 where they remained for almost twelve years and three different Presidential administrations before 9/11. Yet, those four years when they were dropped caused all of the problem?

As you might imagine, Melanie Morgan didn’t take this absurdity lightly:

Well, first of all, I’m absolutely shocked to hear that Bobby Kennedy is saying that if we had different CAFE standards early, that 3000 Americans would still be alive after the bombing of the Twin Towers. This is ridiculous.

Actually, Melanie, ridiculous is an understatement.