Hitchens Tears Apart Hedges in Debate on War and Religion 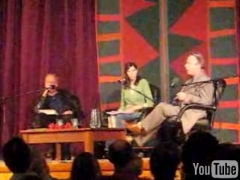 A battle of wits between two men named Christopher took place in Berkeley, California, on May 24. Unfortunately, one contestant came embarrassingly unequipped, so much so that by the end, he chose to not even respond.

Break out the cashews and your favorite libation, sports fans, because this debate between former New York Times Pulitzer Prize winner Chris Hedges, and the never at a loss for words Christopher Hitchens was one for the ages.

The following video is an edited compilation of key moments as prepared by our friend at Zombietime (h/t Allah). What follows is ZT’s transcript of this video. However, the reader is highly encouraged to view all of the videos of this event created for your viewing pleasure:

CHRISTOPHER HITCHENS: The decline -- not to say the moral eclipse -- of the secular left has just been illustrated on this very platform by someone, who makes excuses for suicide murder and tries to trace them to a second-rate sociology.

HITCHENS: But, to what I think is the hidden agenda of the question: 'Is George Bush on a Christian crusade in Iraq and Afghanistan?' Obviously not, obviously not. Anyone who's studied what's happening in either of those countries now knows that the whole of American policy -- and by the way a lot of your own future, ladies and gentlemen -- is staked on the hope that federal secular democrats can emerge from this terrible combat. We can protect them and offer them help while they do so. We know that they're there, that we are -- I've met them, I love them, they're our friends. Every member of the 82nd Airborne Division could be a snake-handling congregationalist, for all I know, but these men and women, though you sneer and jeer at them, and snigger when you hear applause and excuses for suicide bombers -- and you have to live with the shame of having done that -- these people are guarding you while you sleep, whether you know it or not. And they're also creating space for secularism to emerge, and you better hope that they are successful.

CHRIS HEDGES: I feel like I should be reading Kipling's White Man's Burden.

HITCHENS: What you mean is you wish you had read it.

HITCHENS: It's exact equivalent of the evil nonsense taught by Hedges and friends of his, who say the suicide bombers in Palestine are driven to it by despair. Have you read the manifestos of these suicide bombers? Have you seen the videos they make? Have you seen the manifestos they put out? The propaganda that they generate? These are not people in despair. These are people in a state of religious exultation. Who are promised everything. Who are in a state of hope. Who are in a state of adoration for their evil mullahs. And for their filthy religion. It's this that makes them think they have the right to kill others while taking their own lives. If despair among Palestinians was enough to create psychopathic criminal behavior, there's been enough despair for a long time, and enough misery to go around. It is to excuse the vicious, filthy forces of Islamic jihad to offer any other explanation but that it is their own evil preaching, their own vile religion, their own racism, their own apocalyptic ideology that makes them think they have the right to kill everyone in this room, and go to paradise as a reward. I won't listen, nor should you, to anyone who euphemizes or excuses this evil wicked thing.

HITCHENS: Religion consists now, we find, no longer of moral absolutes. It used to be, when I debated with religious types, they would say, 'Yes, circumcision is good; masturbation is bad. We know this, because God tells us so. Hacking of the genitals of a child with a sharp stone is divine; touching them with a hand -- not so great.' We know -- so we knew where we were. We were absolute. Now [gesturing towards Chris Hedges] it's all relative. Now it's all completely relative. It's made up a la carte and cherry-picked by mediocre pseudo-intellectuals who want you to believe that the following thing that would have happened -- in the year, in the month of the year that the liberation of Iraq took place, that finally, after an endless thesaurus of United Nations resolutions condemning every aspect of its regime, that Iraq was free from the proprietorship of Saddam Hussein -- that was March, 2003 -- do you know what would have happened in April, 2003? Iraq was going to be the chair of the United Nations Special Committee on Disarmament. Some people think that would have been a better outcome. More humane, more legal, less troubling, altogether more dealable with. Just as Iran and Libya have just been re-elected to that very Committee on Disarmament at the United Nations. I ask you: You pick that kind of relativism, you'll also find you're dealing with a very surreptitious form of absolutism, which is only capable of describing as fascistic relatively comical forces (who I've denounced up- and downhill all my life in the United States), but cannot use the word totalitarianism about the religion that actually conducts jihad, actually organizes totalitarianism, actually inflicts misery, pain, unemployment, and despair upon millions of people, and then claims what it has done as the license for suicide and murder. A perfect picture [gesturing towards Chris Hedges] has been given to you of the cretinous relationship between sloppy moral relativism, half-baked religious absolutism, and the journalism that lies in between. Thank you.

HEDGES: [Waves his hand, to indicate 'No more.']

Amazing. Hedges was so destroyed he couldn’t even respond.

Game, set, and match to Hitchens.