President Trump made more headlines Wednesday night after he told ABC chief anchor George Stephanopoulos that he would be fine with taking “oppo research” on his 2020 opponent from foreign countries. This comment drew criticism. But during their almost two hours and 30 minutes of prime time coverage, or hair-on-fire panic, neither CNN nor MSNBC cared to mention that that’s exactly what the Clinton campaign did in 2016 with the now-infamous dossier.

According to the numbers gathered by NewsBusters, CNN and MSNBC programs from 8:00 p.m. to 11:00 p.m. Eastern fetched a whopping 148 minutes and 33 seconds on the President’s comments, which totaled 72 percent of their entire live programming (minus commercials and teases). 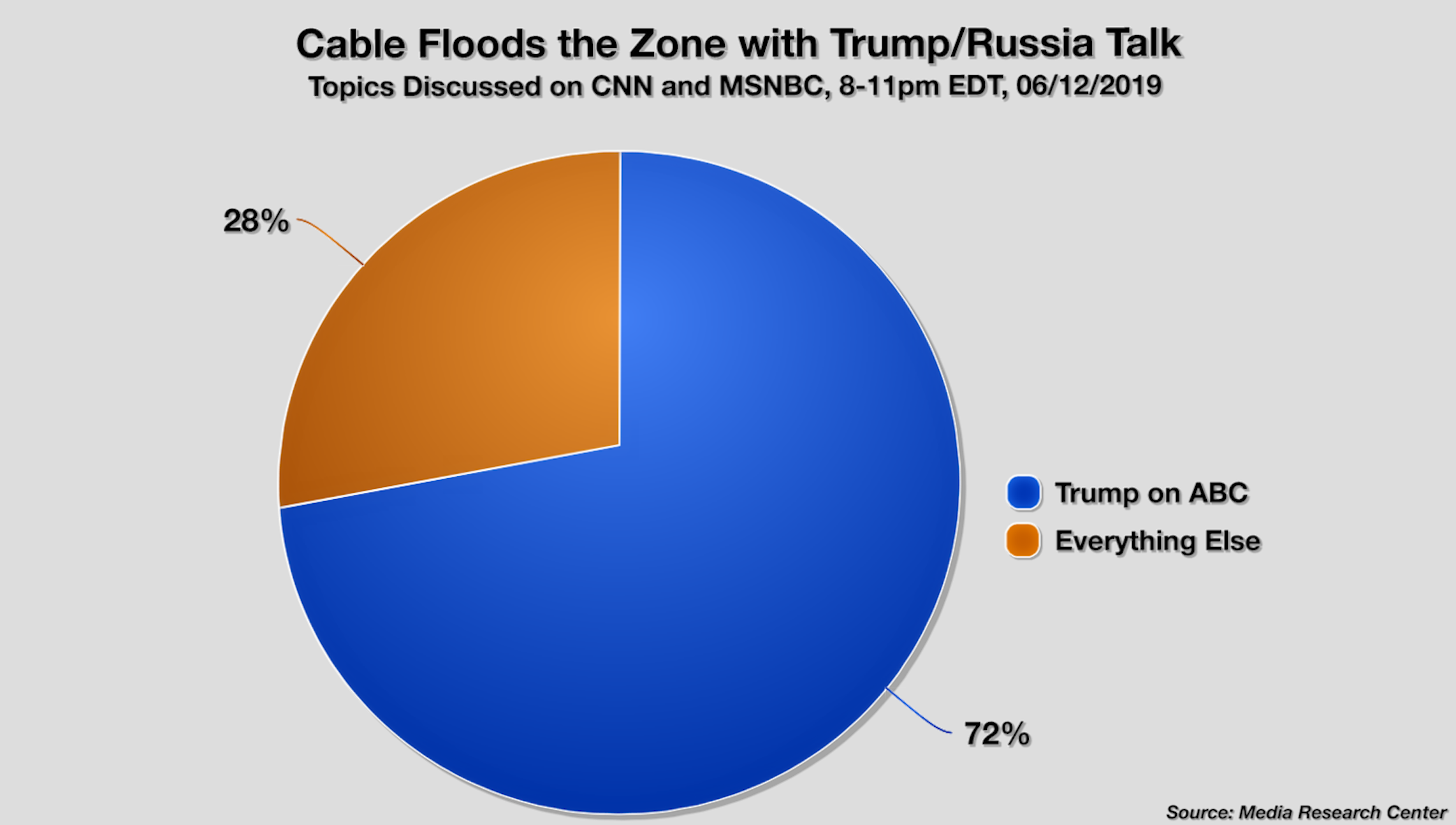 For CNN, their prime time lineup (AC360, Cuomo Prime Time, and the first hour of CNN Tonight) spent almost 84 minutes (1:23:47) getting worked up over the President’s comments.

As for coverage not pertaining to the interview, CNN offered 32 minutes and 50 seconds, including over 12 minutes of coverage dedicated to letting presidential candidate Bernie Sanders make “his case for democratic socialism,” during AC360.

In all, CNN had almost two hours of airtime dedicated to reporting this story. This means that the so-called “Facts First” network spent 72 percent (71.8%) of their time on one story, saying basically the same thing over and over. Inversely, that’s only 28 percent for other stories. 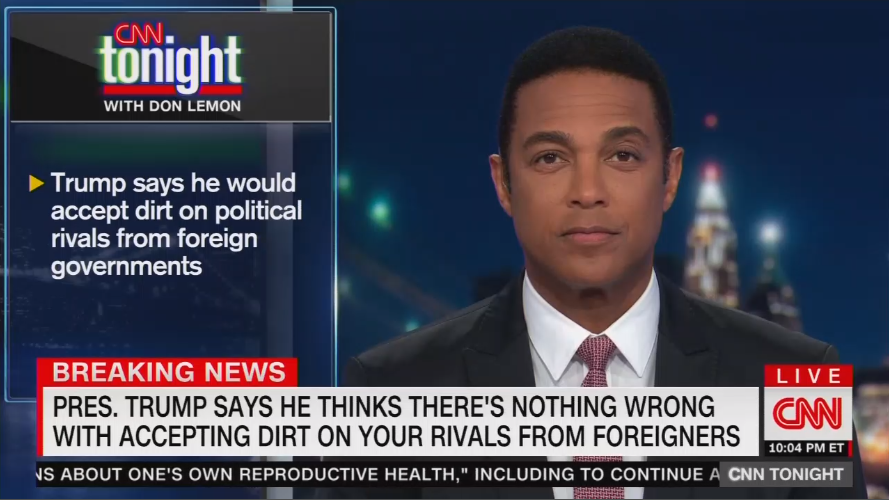 Meanwhile, the Trump count on MSNBC’s prime time (All In, The Rachel Maddow Show, and The Last Word) was 64 minutes and 46 seconds versus 40 minutes and 24 seconds for all other matters, which ironically breaks down to the same percentages as CNN (72 percent to 28 percent). It’s like they sing from the same sheet music.

CNN’s coverage of Trump’s interview grew more encompassing as the night dragged on. AC360 had 24 minutes and 11 seconds, Cuomo Prime Time went with 27 minutes and 38 seconds, and CNN Tonight topped off at 31 minutes and 58 seconds.

Over on MSNBC, the worst offender in this three-hour block was The Last Word, which spent a whopping 45 minutes and 38 seconds melting down over the President’s comments versus a mere two minutes and 45 seconds on other matters.

On that front, the only other two topics were Hope Hicks’s decision to testify before the House Judiciary Committee and new reporting concerning bailout money meant for U.S. farmers landing in the hands of a Brazilian meatpacking company.

Maddow was second in Trump time at 34 minutes and 25 seconds while All In was the most balanced at 24 minutes and 43 seconds on Trump (which was guest-hosted by Stephanie Ruhle).

While these networks spent all this time railing against President Trump, they failed to decry the Clinton campaign’s use of former British spy Christopher Steele to obtain dirt on Trump from Russian sources.

During CNN Tonight, CNN national security analyst Matthew Rosenberg tried to take a swipe at Trump by discrediting the President’s suggestion it was “oppo research”. But in doing so, he basically condemned what the Clinton campaign did:

You know, look, in our campaigns, candidates go out, they collect information about each other, that's opposition research. A foreign government coming in saying we know this about your rival, maybe we hacked it out of their emails, maybe we bribed people to get it, I don’t know how they got it, that's interference. And I think, you know, there’s very little doubt about that.

STENGEL: This was a signal to Russia because you know who would have opposition research on the Democratic candidates and Joe Biden in particular? Russia. What Trump was saying is look, I will welcome this information. I will suborn the law, I would undermine the law to defeat my opponent and work with a hostile foreign power trying to undermine our democracy. That's what I'm going to do.

There’s a whole wide world of news to share with the viewers, but these two cable networks decided to dedicate a vast majority of their prime time programming venting about one story. Talk about falling down on their jobs to inform the public.