For over a month, the liberal media have been cheering on the liberal extremists who doxed the home addresses of all the conservative Supreme Court justices and marched on their homes to intimidate them, after a leaked draft decision to overturn Roe v. Wade went public. This shared animus and calls to action have culminated in an attempted assassination of Justice Brett Kavanaugh Wednesday morning. So it’s worth a look back at some of those who were fine with tossing away civility.

Early last month, senior editor for Law & Policy, Imani Gandy appeared on CNN Newsroom on the afternoon of May 3 and declared: “I hope there will be a national uprising, but I’m concerned that the stomach for that isn’t there.” That only got a “hmm” from host Victor Blackwell at the time.

A few days later (May 9), Laura Jarrett, the host CNN’s Early Start and the daughter of former Obama advisor Valerie Jarrett, was on CNN’s New Day where she and host John Avlon examined those who put Kavanaugh’s house in their sights:

AVLON: The real questions and conversations today about protests outside Supreme Court justice’s houses, particularly Justice Kavanaugh. Where do you think that line is?

JARRETT: I think for a lot of people, a conversation about civility feels like it misses the mark when constitutional rights that you believed that you had for over 50 years are about to be overturned.

Fortunately, the wannabe assassin never got close enough to test how on the “mark” he could be thanks to the U.S. Marshals who intercepted him near the residence. What an unfortunate use of words for Jarrett. 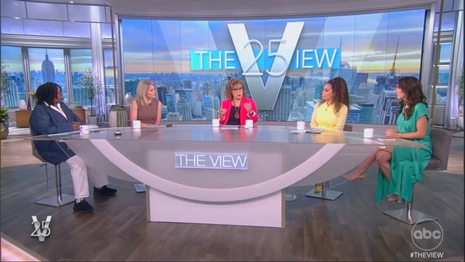 Next up, we have the ladies of The View (May 10) who were very enthusiastic about having people know where the conservative justices live and waiting for them to come out. “But it also shows Alito what it feels like to lose your freedom of choice. He cannot leave the house easily. So maybe that's a good lesson for them,” Behar declared to roaring applause from the radical liberal audience.

The only one to pump the brakes was self-described Republican guest-host Alyssa Farah Griffin, who showed “a call to arms” declaration from Democratic Chicago Mayor Lori Lightfoot. “One thing I would mention, the language and rhetoric matters,” she said.

Griffin was also concerned about things going too far and co-host Whoopi Goldberg seemed to suggest that meant things would be even:

GRIFFIN: I worry it could begin to look like intimidation when it’s at someone's doorstep. I’m someone –

GOLDBERG: It’s so funny. So does what Alito wrote. Looks the same way to me. It looks like intimidation. And yeah, it’s kind of the same thing.

We will not surrender our rights without a fight—a fight to victory!

Last month (May 19), bitter “comedian” Samantha Bee angrily shouted: “Pardon me but, in my civilist way possible, may I humbly request that you [beep] the [bleep] off? How dare Republicans demand civility as they strip away our civil rights?”

She went on to demand that Republican Senator Susan Collins of Maine and conservative Justice Amy Coney Barret should be unable to feel safe in their homes:

When Susan Collins gets a sidewalk full of bubble letter chalk, she is not the victim. When Amy Coney Barrett's tacky ass McMansion is visited by a pack of roaming handmaids, she is not the victim. The real victims in this atrocity of a court decision will be the people who live in the more than 20 states that would ban abortion after Roe is overturned.

And let’s not forget how, way back in 2020, we had CNN’s Chris “Fredo” Cuomo (who has since been fired for lying to the company) seriously argue that protests did not have to be peaceful. “And please, show me where it says that protesters are supposed to be polite and peaceful,” he sneered at naysayers.

So, here we are…with a liberal media that rejects peaceful protests and promotes the targeting of justices at their homes…and an attempted assassin arrested.