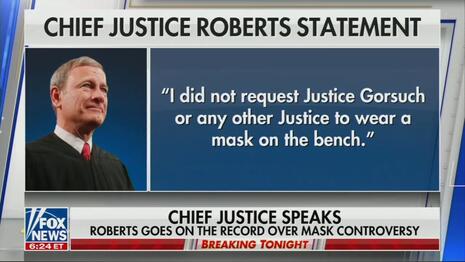 The day after NPR legal affairs correspondent Nina Totenberg laid an egg with a report suggesting conservative Supreme Court Justice Neil Gorsuch was spitefully ignoring requests from Chief Justice John Roberts (conservative) and Justice Sonia Sotomayor (liberal) to wear a mask in oral arguments, every party named in the report publicly declared it to be patently untrue. And despite these public comments, NPR and Totenberg spent Wednesday hanging on tightly to the lie.

According to Totenberg’s original reporting, “Chief Justice John Roberts, understanding that [Sotomayor has diabetes and frets about COVID-19], in some form asked the other justices to mask up. They all did. Except Gorsuch, who, as it happens, sits next to Sotomayor on the bench.”

But in a joint statement, on Wednesday, Gorsuch, and Sotomayor not only rebuked NPR’s claims about what was said but affirmed their friendship: “Reporting that Justice Sotomayor asked Justice Gorsuch to wear a mask surprised us. It is false. While we may sometimes disagree about the law, we are warm colleagues and friends.”

After the statement was released, many liberal reporters pounced by suggesting that it didn’t matter what they said because the story asserts the request came from Roberts. Totenberg’s NPR colleague David Gura even took to Twitter to defend her reporting and accuse both Justices of lying.

I surprised at how many Supreme Court correspondents I admire are passing along a statement from two justices that is at best false without any context whatsoever.

“I surprised at how many Supreme Court correspondents I admire are passing along a statement from two justices that is at best false without any context whatsoever,” he chided.

But not long after, Roberts weighed in by blowing up the only out the liberal media had: “I did not request Justice Gorsuch or any other Justice to wear a mask on the bench.”

On Tuesday, Fox News Channel chief legal correspondent Shannon Bream was the first to utterly bust Totenberg’s falsehoods during an appearance on Special Report. “There has been no blanket admonition or request from Chief Justice Roberts that the other Justices begin wearing masks to arguments,” she reported at the time. “The source further stated Justice Sotomayor did not make any such request to Justice Gorsuch.”

In the Special Report update on Wednesday, anchor Bret Baier quipped that Bream had an “update and some news regarding that maskgate that you brought to us…” After reiterating that what NPR reported “wasn’t accurate,” Bream noted that “rare statements issued by three of the justices today confirm what we reported here yesterday.”

“But although the Chief Justice almost never weighs in publicly, he did. He added his own statement as well,” she added. “Roberts also indicating he’s not going to be commenting any further on this story.”

Despite the facts coming out, NPR and Totenberg were still standing by the story (Totenberg even bragged about it on Twitter). “NPR stands by its reporting,” she wrote on a new report on Wednesday. “What is incontrovertible is that all the justices have at once started wearing masks — except Gorsuch. Meanwhile, Sotomayor has stayed out of the courtroom.”

NPR stands by my reportinghttps://t.co/eEtiNgMQet

“The NPR report said the chief justice's ask to the justices had come ‘in some form,’” she argued in her own defense, despite Roberts’ unequivocal denial of the false claims.

But she never explained what that “some form” was. So, is she suggesting Roberts may have tried using telepathy to hint to Gorsuch? How about smoke signals? Maybe the carrier pigeon got lost. Or maybe he held a séance in his chamber.

This nonsense is just another reason to defund NPR.