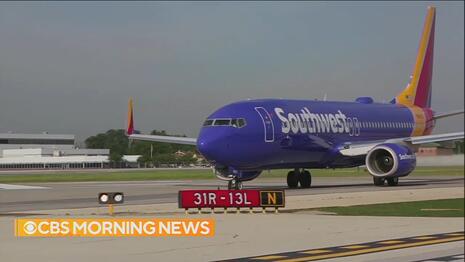 Truly evil folks in the liberal media were sent into a bloodlust Saturday when an Associated Press report targeted an unnamed Southwest airline pilot who said goodbye to his disembarking passengers by ending his sign-off with “Let’s Go Brandon,” the anti-Biden slogan sweeping the nation. This led to the AP reporter trying to break into the cockpit to confront him and CNN employees on Twitter comparing him to ISIS and baselessly accusing him of being a drug addict, all in an attempt to get him fired.

“On Friday morning on a Southwest flight from Houston to Albuquerque, the pilot signed off his greeting over the public address system with the phrase,” wrote AP reporter Colleen Long in a pearl-clutching piece about the anti-Biden slogan’s popularity. She also purported there were “audible gasps from some passengers.” It’s unclear if she was one of them.

Long took to Twitter and admitted she tried to force her way into the cockpit:

Also in defense of airline I was asking them to open locked cock pit and probably sounded insane!

She even complained that sponsors were avoiding the NASCAR driver featured in the NBC Sports interview that launched the phrase (the censored version of “F*** Joe Biden). But if you thought Long’s reaction truly was “insane,” the folks at CNN required serious psychiatric help.

Leftist radical, former FBI special agent, and CNN analyst Asha Rangappa equated the pilot’s use of the anti-Biden slogan to support for ISIS. “As an experiment, I’d love for an @SouthwestAir pilot to say “Long live ISIS” before taking off. My guess is that 1) the plane would be immediately grounded; 2) the pilot fired; and 3) a statement issued by the airline within a matter of hours,” she tweeted.

As an experiment, I’d love for an @SouthwestAir pilot to say “Long live ISIS” before taking off. My guess is that 1) the plane would be immediately grounded; 2) the pilot fired; and 3) a statement issued by the airline within a matter of hours

The folks at CNN need to spare us their faux outrage at coded vulgarity. After all, they’re the network that tried to justify their use of “s***-hole” almost 200 times (195) in 24-hours, because former President Trump used it to describe third-world countries.

If all of that wasn’t bad enough, Harvard professor and CNN analyst, Juliette Kayyem accused the pilot of being a drug addict or having a personality disorder. She called on Southwest to investigate the pilot because supposedly “His words reflect possibility of anger management or substance abuse. It is worth asking.”

Yes pilot conduct. His words reflect possibility of anger management or substance abuse. It is worth asking.

She also suggested the passengers take action against him:

If @SouthwestAir doesn’t do anything, every passenger on that flight has standing to file a complaint with the @FAANews and they should do so. Southwest will then be compelled to investigate or defend him. Have fun with that. No messing around in the air. Bright line rule. https://t.co/L7VlZWJ0SU

Kayyem then went after ABC national correspondent Terry Moran for simply equating those who use the “Let’s go Brandon” chant to “little boys” making “farting noises,” and warned if people told them to stop they’ll just make “louder fart noises.” Kayyem doubled down on her smears against the pilot and Moran suggested “litigation” against him was an appropriate option:

OK. If that’s the case—it’s an employer issue. If the employer fails to take the action you deem appropriate, there are many avenues of complaint, redress, even litigation.

But you want to blow it up into a national issue? You’re feeding the beast. That’s not the way to kill it.

And seeing that Southwest wasn’t responding to her impotent rage and the story really only angering radical liberals, Kayyem took to threatening them. “This is that lull period of time when a company thinks they can hide it out, but it’s just a brewing storm. @SouthwestAir, find out what ails your pilot,” she demanded.

With all the smears and possible libel of the pilot, the liberal media proved they’re the ones in need of the mental checkup.