Friends of Hamas: CBS Scoffs at Israeli Soldiers Shot at the Border 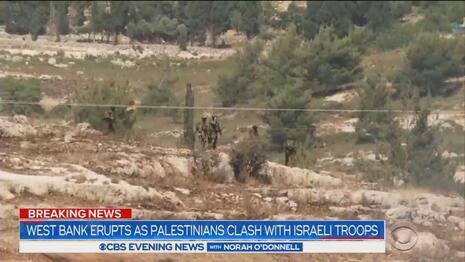 As the latest flare-up between the Israelis and Palestinians dragged on, CBS Evening News seemingly wouldn’t be happy until the Jewish State of Israel was pushed into the sea. Tuesday’s edition of their Hamas-friendly coverage featured foreign correspondent Holly Williams scoffing at how two Israeli soldiers were shot by terrorists as Palestinians took part in their “day of rage” in the West Bank. And, of course, she spewed the Hamas propaganda that was fed to her.

As she was transitioning to the segment, anchor Norah O’Donnell suggested it was Israel’s duty to de-escalate the situation despite Hamas deliberately targeting Israeli civilians. “The Israeli military spokesman says that as long as rockets are being fired at Israel, de-escalation is not on the table,” she griped.

“The Palestinians have been throwing stones, and the Israeli soldiers who are about 300 yards away on that hillside, have been shooting tear gas canisters and live fire,” Williams proclaimed at the top of the video.

Williams also made it clear that she had no sympathies for the Israeli soldiers protecting Israeli civilians. “Dozens of Palestinians were reported injured and four killed. Israel claims two soldiers were shot in the leg, though we saw no guns on the Palestinian side,” she scoffed.

So, Williams wants us believe that her tiny section of the over 400-mile West Bank Barrier was representative of the situation over the entire area. Clearly, she was trying to mislead and gaslight CBS viewers about the situation on the ground. She also tried to peddle the already debunked claims about the Arab evictions in East Jerusalem.

And her affinity for Hamas was clear. At one point, she lamented that the group was “considered a terrorist organization by the U.S.” Of course, she omitted how most civilized countries agreed with that accurate assessment.

Hamas’s days-long barrage of rockets were of little interest to Williams as she decried how Israel had the nerve to defend itself. “In retaliation, the tiny, poverty-stricken Gaza strip has been shattered by Israeli airstrikes,” she sneered.

Then there’s how she peddled the Gaza casualty numbers fabricated by Hamas. “Around 50,000 people have now fled their homes, and more than 200 have been killed,” she said as if it were true. She vaguely admitted that the numbers came from “Palestinian officials,” but refused to admit the Health Ministry was controlled by Hamas.

This wasn’t the first time that Williams had showed her support for Middle East terrorists and not just Hamas.

Almost three years ago to the day, Williams parroted Palestinian extremists who called the creation of the Jewish state of Israel a “catastrophe.” “Most of the Palestinians here today are peaceful, but some are attempting to cross the border. They're throwing stones and lighting fires,” she touted. “These protests also mark the 70th anniversary of the founding of the state of Israel which the Palestinians call a catastrophe.”

In 2019, she sympathized with an ISIS bride who said her punishment should be some “therapy” sessions. “Hoda Muthana was studying business at the University of Alabama in 2014 when she told her family she was going on a school trip. Instead, flying to the Middle East and crossing into ISIS territory in Syria,” she reported.

And she sprinted to use more Hamas numbers back in 2018 when the group claimed 60 people were killed storming the border with Israel, and she claimed they were civilians. There was no follow-up report when Hamas admitted the next day that most of the people were terrorists.

So, when will CBS and Williams be happy?

CBS’s support for Hamas terrorism was made possible because of lucrative sponsorships from Ancestry and Fidelity. Their contact information is linked so you can tell them about the biased news they fund. CBS has also asked people to “Text Norah” at this number: (202) 217-1107

NORAH O’DONNELL: And we're going to turn now to the Middle East, where there is no end in sight for the deadly conflict between Israel and Hamas. The Israeli military spokesman says that as long as rockets are being fired at Israel, de-escalation is not on the table. CBS's Holly Williams was in the West Bank today.

HOLY WILLIAMS: Today, the West Bank erupted. The Palestinians called it a day of rage.

The Palestinians have been throwing stones, and the Israeli soldiers who are about 300 yards away on that hillside, have been shooting tear gas canisters and live fire.

Dozens of Palestinians were reported injured and four killed. Israel claims two soldiers were shot in the leg, though we saw no guns on the Palestinian side.

Many Palestinians feel powerless. Just listen to Maisoon Ali, a banker who told us she used to live in the U.S.

MALSOON ALI: If you are living in Washington, D.C., or in Chicago, or in L.A., accept the neighbor to come and take a piece of land or a piece of furniture from your house. Nobody accept it.

WILLIAMS: Hamas, a group considered a terrorist organization by the U.S., has fired more than 3,000 rockets at Israel since last week, killing two civilians today.

In retaliation, the tiny, poverty-stricken Gaza strip has been shattered by Israeli airstrikes. Around 50,000 people have now fled their homes, and more than 200 have been killed, according to Palestinian officials.

Israel says it's targeting militants, but according to Mohammad al Hadidi, there was no warning before the strike that killed his wife and four sons. Only his five-month-old baby, Omar, was saved from the rubble.

More than 60 children have been killed by Israeli airstrikes, according to Palestinian figures, and tonight, the fighting continues. Israel's defense minister said today they have thousands more Hamas targets in their sights. Norah.

O’DONNELL: All right, Holly Williams on the scene there, thank you.