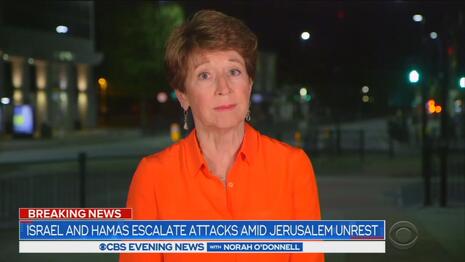 In her Tuesday report for the CBS Evening News, foreign correspondent Elizabeth Palmer doubled down on her support for Hamas terrorists by under-reporting Israeli casualties from their rocket attacks and decrying Israeli retaliatory strikes on terrorist installations. In stark contrast, ABC’s Matt Gutman noted the lengths Israel went to prevent civilian casualties in Gaza despite Hamas using them as human shields.

While Palmer did report that “rockets fired from Gaza lit up the sky over Tel Aviv” where “one woman was killed in the attack,” she failed to mention how rockets had evaded the Iron Dome and rained down residential buildings in the Israeli border town of Ashkelon, killing two women and wounding almost two dozen throughout the country.

Instead, Palmer lamented: “Prime Minister Benjamin Netanyahu warned that Hamas and Islamic Jihad would pay a heavy price. The Palestinian citizens of Gaza have already paid a heavy price.”

She added: “All day, Israeli airstrikes pounded the territory, officially targeting military installations. But civilian buildings were destroyed, too. The Palestinians say more than 220 people were injured and 32 were killed, 10 of them children.”

She followed that up with an apparent gripe about how well Israel was able to defend itself. She noted that, unlike the Israeli airstrikes, Hamas’s rocket attacks were “limited by Israeli interceptor rockets, the so-called ‘Iron Dome’ which blew most of them to pieces before they landed.”

When Palmer talked about how “civilian buildings were destroyed, too,” she played a clip of a residential building getting leveled by an Israeli airstrike. But what she failed to mention was Israeli’s warnings to clear the building, a humane tactic Israel was known for implementing.

That’s where Gutman comes in.

“Tonight, that image. Israeli missiles leveling an apartment building in Gaza. Smoke soaring skyward. Sources telling ABC News the building had been evacuated. A drone surveying the scene to make sure people were out,” he announced at the top of his report.

Clearly, Palmer was not giving CBS viewers the full picture.

Gutman also noted that the State Department declared that “Israel has the right to defend itself and to respond to rocket attacks.” Something Palmer refused to admit.

Tonight, Hamas rockets fired at Tel Aviv, most intercepted by Israel's air defense. But debris falling over the city. One that got through, killing a woman in the suburbs. In all, hundreds of rockets fired from Gaza into southern Israel over the last 24 hours, killing two women there, including one in a direct hit on this house.

“The Israeli military retaliating in force, lighting up the sky over Gaza, saying it struck more than 500 targets in the last day and a half. Tonight, striking more high-rises after warning people to evacuate,” she said, noting that Israel had reportedly taken out three of Hamas’s senior leaders.

Palmer concluded by warning that the deaths of those leaders would harden Hamas’s resolve.

Elizabeth Palmer’s, and ultimately CBS’s, support for Hamas terrorists was made possible because of lucrative sponsorships from Liberty Mutual and Neutrogena. Their contact information is linked so you can tell them about the biased news they fund. CBS Evening News has also asked people to text anchor Norah O’Donnell at this number: (202) 217-1107.

NORAH O’DONNEL: Well, tonight, the worst violence in the Middle East in seven years has taken an ominous turn. Palestinians have fired hundreds of rockets into Israel, which has responded with devastating air strikes. The Biden administration is calling for a de-escalation but says Israel has a right to defend itself. More now from CBS's Elizabeth Palmer.

ELIZABETH PALMER: Just after 9:00 this evening, rockets fired from Gaza lit up the sky over Tel Aviv. Down on the ground, sirens wailed, and people ran for cover. One woman was killed in the attack. And tonight, Prime Minister Benjamin Netanyahu warned that Hamas and Islamic Jihad would pay a heavy price.

The Palestinian citizens of Gaza have already paid a heavy price. All day, Israeli air strikes pounded the territory, officially targeting military installations. But civilian buildings were destroyed, too. The Palestinians say more than 220 people were injured and 32 were killed, 10 of them children.

In retaliation, Hamas rained more than 400 rockets down on Israel. The damage they did was limited by Israeli interceptor rockets, the so-called "Iron Dome" which blew most of them to pieces before they landed.

There are now international calls for a cease-fire, but as Islamic Jihad members vowed revenge for the deaths of three of their commanders today, there appears to be a fierce determination on both sides to fight on.

Tonight, both the U.S. and Egypt are using their considerable diplomatic muscle to try and calm this dangerous situation before it gets any more lethal. Norah.