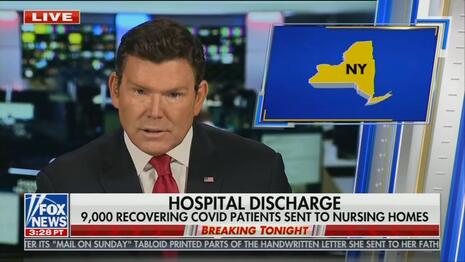 A pair of bombshell revelations dropped Thursday and further exposed the corruption of New York Governor Andrew Cuomo (D). The first shoe to drop came from the Associated Press, early in the evening, and it found Cuomo had sent over 9,000 elderly coronavirus patients back to their long-term care centers (far more than they first claimed). The second story came in the form of a recorded phone call obtained by the New York Post where an aide admits the administration intentionally covered up nursing home deaths.

The AP story dropped before the broadcast networks went to air, but none of them covered it. Not even a news brief. This meant ABC’s World News Tonight, the CBS Evening News, and NBC Nightly News chose not to share the politically damaging story with their viewers.

Instead of covering Cuomo’s deadly incompetence, ABC gawked at police horses that ran down a street. CBS focused on a frivolous story about the British royal family. And over on NBC, they showed off an art museum. A true showcase of their priorities.

“The new number of 9,056 recovering patients sent to hundreds of nursing homes is more than 40% higher than what the state health department previously released,” wrote the AP. “And it raises new questions as to whether a March 25 directive from Gov. Andrew Cuomo’s administration helped spread sickness and death among residents, a charge the state disputes.”

While the broadcast networks were helping to hide the blood on Cuomo’s hands, anchor Bret Baier was on Fox News Channel’s Special Report noting this:

The moves were made under a controversial order by Governor Andrew Cuomo. That order was rescinded in May amid criticism it accelerated outbreaks. New figures come as the Cuomo administration has been forced in recent weeks to acknowledge the overall number of COVID-19 deaths among long-term care residents is nearly 15,000, up from 8,500 previously disclosed.

Now, the New York Post’s revelations dropped just as ABC and CBS were wrapping up their newscasts, and NBC’s was just about to begin. But their refusal to report the first bombshell made covering “[t]he stunning admission of a cover-up” all that more important and necessary for their Friday morning newscasts.

According to one of Cuomo’s aides, the administration’s reason for covering up nursing home deaths was entirely corrupt and self-serving. “Governor Cuomo’s top aide privately apologized to Democratic lawmakers for withholding the state’s nursing-home death toll from COVID-19 — telling them ‘we froze’ out of fear the true numbers would ‘be used against us’ by federal prosecutors,” the paper wrote.

Of course, Secretary to the Governor Melissa DeRosa blamed their cover-up on then-President Trump (Click “expand”):

The New York Post later noted that the Cuomo administration was also prioritizing apologizing to fellow Democrats over the families who had relatives die by his order.

Now, let’s see if the networks dare to cover the truth.

The networks’ role in the cover up was made possible because of the lucrative sponsorships from WeatherTech on ABC, Liberty Mutual on CBS, and Ford Motor Company on NBC. Their contact information is linked so you can tell them about the biased news they fund.

BRET BAIER: Breaking tonight. In the early days of the pandemic in New York, more than 9,000 recovering coronavirus patients were released from hospitals and put into nursing homes. That’s according to new records out tonight obtained by the Associated Press. 9,000. That figure is more than 40 percent higher than what we had previously known and had been released by the state Health Department in New York.

The moves were made under a controversial order by Governor Andrew Cuomo. That order was rescinded in May amid criticism it accelerated outbreaks. New figures come as the Cuomo administration has been forced in recent weeks to acknowledge the overall number of COVID-19 deaths among long-term care residents is nearly 15,000, up from 8,500 previously disclosed.