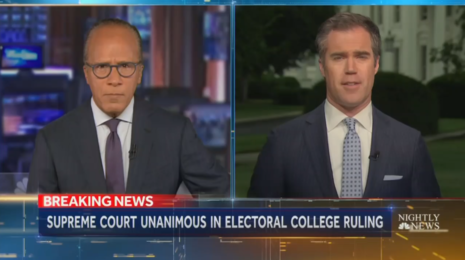 As a Media Research Center study exposed last week, the broadcast networks had a sleazy habit of extolling Supreme Court victories for liberals and ignoring wins for conservatives. Well, they were back at it again on Monday after all nine justices supported a state’s right to punish so-called “faithless electors” in the Electoral College who don’t vote in accordance with their state’s popular vote.

Such electors were the subject of praise back in 2016 when ABC, CBS, and NBC hoped for them to steal the election from President-elect Trump (though there ended up being more defections away from Hillary Clinton). Now, ABC and CBS ignored the 9-0 ruling while NBC fecklessly gave it 13 seconds.

As NewsBusters reported back in 2016, the networks backed the “last-ditch” effort to intimidate electors into going against Trump. “One last gasp. A desperate, last-ditch effort to deny Donald Trump the presidency as the Electoral College meets across the country today. Protesters encouraging members to change their votes,” lauded then-Today co-host Matt Lauer on NBC.

In late November, 2016, CBS touted the “pressure” being put on electors but refused to mention that some were receiving death threats. “[S]ome Electoral College members are being pressured to change their votes...Hillary Clinton supporters want Donald Trump electors to change sides…” boasted then-CBS This Morning co-host Charlie Rose.

Shortly after the election, then-CBS reporter (now CBS This Morning co-host) Tony Dokoupil decried the very laws the Supreme Court eventually upheld. “Ohio is one of 29 states with rules preventing electors from switching votes, but there's nothing in the federal law or the Constitution to stop them from going rogue,” he falsely proclaimed.

The day the Electoral College wrapped up their proceedings and officially elected Trump as President, ABC’s World News Tonight, via senior White House correspondent Cecilia Vega, celebrated the protesters harassing the electors. “As the Electoral College convened in statehouses across the country, Trump's opponents making a last-ditch attempt to keep him from the White House,” Vega touted.

“Everyone one of you, you’re pathetic! You don't deserve to be in America,” shrieked one crazed woman Vega highlighted. “This is my America! My America!”

And in the early days of the current presidential election cycle (so in 2019), NBC Nightly News ran a nauseating series called “My Big Idea,” in which they gave a megaphone to only Democratic candidates. In one installment, correspondent Harry Smith gushed about former South Bend, Indiana Mayor Pete Buttigieg, and his big idea to abolish the Electoral College to, according to NBC, “strengthen democracy.”

But on Monday, all NBC could muster on the ruling that strengthened the institution was this pathetic 13 seconds from White House correspondent Peter Alexander:

And today, the case that could impact this fall's election, the Supreme Court unanimously ruled that presidential electors, part of the electoral college, cannot break ranks and can be forced to support the winner of their state's popular vote.

In stark contrast, Fox News Channel’s Special Report did a full segment on the ruling, featuring chief legal correspondent Shannon Bream. She read from the majority opinion authored by liberal Justice Kagan, which contradicted Dokoupil’s assertion. "The Constitution’s text and the Nation's history both support allowing a state to enforce an elector’s pledged to support his party's nominee and the state voters’ choice for president," the quote said.

Bream also noted that, during the oral arguments back in May, the Justices seemed concerned about electors getting bribed into changing their vote. Another likely concern? The kinds of death threats the networks ignored after the 2016 election.

The network fecklessness was sponsored by Purina on ABC, Allstate on CBS, and Liberty Mutual on NBC. Their contact information is linked.

PETER ALEXANDER: And today, the case that could impact this fall's election, the Supreme Court unanimously ruled that presidential electors, part of the electoral college, cannot break ranks and can be forced to support the winner of their state's popular vote.

Well, this has to do with the Electoral College which is how we actually choose the president. And what the court decided today could make all the difference in who becomes president in our future elections. The current case stems from 2016, when ten people chosen to represent their states in the Electoral College decided, well, they wanted to go rogue and vote how they chose instead of following their state’s popular votes.

Well, that number would be enough to change the results of five previous presidential elections, and that possibility was something the justices seemed to be keenly aware of when they heard the case in May. In unanimous opinion today, the Supreme Court held that states can punish or remove electors who do not stick to their pledge to vote in line with their state’s popular vote.

Writing for the 9-0 court today, Justice Kagan said this, quote, "The Constitution’s text and the Nation's history both support allowing a state to enforce an elector’s pledged to support his party's nominee and the state voters’ choice for president."

Now, based on what I heard during the oral arguments back in May with the justices openly worrying about the possibility of electors being bribed and the country being thrown into chaos, not too surprising of a result today, Bret.