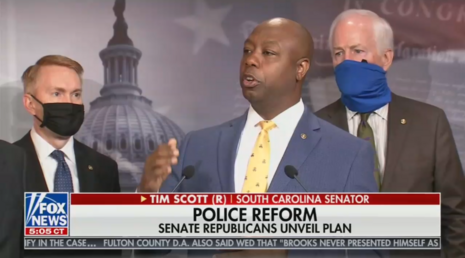 On top of that, none of them reported on the outrage House Speaker Nancy Pelosi (D-CA) generated when she told CBS that the Republican Party was “trying to get away with murder, actually, the murder of George Floyd.”

In a New York Times article published Tuesday, reporter Catie Edmondson detailed how “Mr. Scott shocked his colleagues when he spoke at Republicans’ weekly luncheon about death threats he and his aides had received in recent days…”

The Times acknowledged that Scott had shared two of the audio recordings with them:

The calls, filled with profanity and racist slurs, included one diatribe addressed to “Uncle Tim,” where the caller, after cruelly and profanely condemning Mr. Scott, his family and some of his Republican colleagues, told Mr. Scott to “take your one-way ticket straight to hell.”

In his interview with The Times about the messages, the Senator blamed the media for how his police reform legislation was being portrayed. “It’s interesting that we are on the right side of the police reform conversation, yet we’re on the wrong side according to the people, based on the way that we are characterized in the national press,” he said.

And he was right. As NewsBusters pointed out last week, ABC and NBC skipped the official rollout of Scott’s Justice Act, while CBS downplayed it in a 22-second mention.

Just as they didn’t have time for him, the broadcast networks didn’t have time to report on outrage to Pelosi’s vile smears. CBS Evening News had time to promote Bolton’s book (which they failed to mention they benefited from since they and the book’s publisher were owned by the same company), but they refused to cover the comments made to their own West Coast correspondent, Steve Futterman.

Nancy Pelosi says with their police reform proposals, Senate Republicans are "trying to get away with murder, actually -- the murder of George Floyd."

Hear it in this @CBSNewsRadio interview with my colleague @sfutterman:https://t.co/DAsGYssPzD

After Pelosi rambled on for a little bit, suggesting the GOP wasn’t serious about reforms, she capped off by declaring: “But so far, they were trying to get away with murder, actually, the murder of George Floyd.”

Futterman was unfazed by Pelosi’s incendiary, divisive, and blatantly false comment. He followed up by asking if she understood why people wanted to defund the police. There was no fact check about how the Republican Party had no hand in the killing of George Floyd.