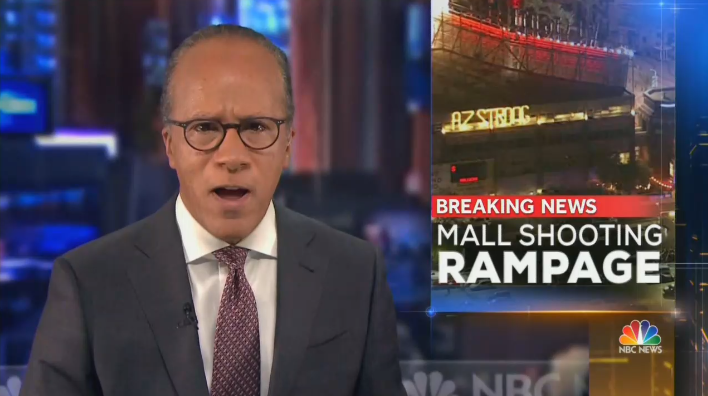 With all 50 states beginning to reopen in various ways and much to the chagrin of the liberal media panic peddlers, they needed a new way to try and scare the public from going outside and trying to get their lives back on track. Thursday's NBC Nightly News trotted out a new strategy in suggesting that mass shootings were going to skyrocket as people ventured to public places.

The Wednesday shooting outside Phoenix, Arizona provided the perfect incident for NBC to exploit. “At an Arizona mall in the first weeks of reopening, horror in the parking lot,” announced correspondent Gadi Schwartz at the top of the report.

Moments later, Schwartz suggested that with lockdowns lifting, there would a flood of mass shootings. “It has been three months since America has seen a high-profile active shooter, the temporary reprieve during the pandemic is now over. But authorities say this one could have been a lot worse,” he told viewers.

To back up his claim, Schwartz played a soundbite of the mayor of Glendale, Arizona:

MAYOR JERRY WEIERS: The pandemic, very likely, could have possibly been a life safer tonight because of the smaller crowds.

There was a similar emphasis on reopening playing a role in ABC’s news brief on the story during World News Tonight, from anchor David Muir:

There are new developments tonight after that shooting rampage at an outdoor shopping mall in Arizona overnight, less than two weeks after the state lifted its stay at home order. Police say three people were wounded when the gunman opened fire with an assault rifle. The 20-year-old suspect allegedly posting chilling video on social media. He was taken into custody. Prosecutors say he told them he was targeting couples and that felt he'd felt he’d been bullied in the past.

Despite their fear-mongering against reopening, we know that those with evil in their heart and with a twisted mind will find a way to take innocent lives regardless of what the laws are. We’ve seen how shootings have continued to take place in cities and states with strict gun control laws. Even during the lockdowns, the media have still reported on shootings that have occurred. Therefore, lockdowns or not, we know violent crime can still be perpetrated.

.@NBCNightlyNews tries out a new scare tactic to keep people inside, warn that they might get shot in a mass shooting https://t.co/jHZWLXgWCq pic.twitter.com/oanjiR601X

LESTER HOLT: There are late developments tonight after a shooting rampage at a recently reopened mall near Phoenix. With more, here is Gadi Schwartz.

GADI SCHWARTZ: At an Arizona mall in the first weeks of reopening, horror in the parking lot.

EMERGENCY DISPATCH: There’s a man with a gun.

SCHWARTZ: Police say the masked gunman stopped at this a shopping center just outside of Phoenix.

UNIDENTIFIED WOMAN: Police running, helicopters in the air, we’re hiding to the back.

SCHWARTZ: The suspect shooting and injuring three people before surrendering to police. Authorities say he has confessed.

SGT. RANDY STEWART: He said he went to Westgate to target victims. He wanted to gain some respect. He was planning to harm ten victims.

SCHWARTZ: Prosecutors charging 20-year-old Armando Hernandez Jr. with aggravated assault. His home raided by police as witnesses who saw the shooting ask why.

UNIDENTIFIED WOMAN: You're a kid, why would you do something like this.

SCHWARTZ: It has been three months since America has seen a high-profile active shooter, the temporary reprieve during the pandemic is now over. But authorities say this one could have been a lot worse.

JERRY WEIERS (mayor of Glendale, AZ): The pandemic, very likely, could have possibly been a life safer tonight because of the smaller crowds.