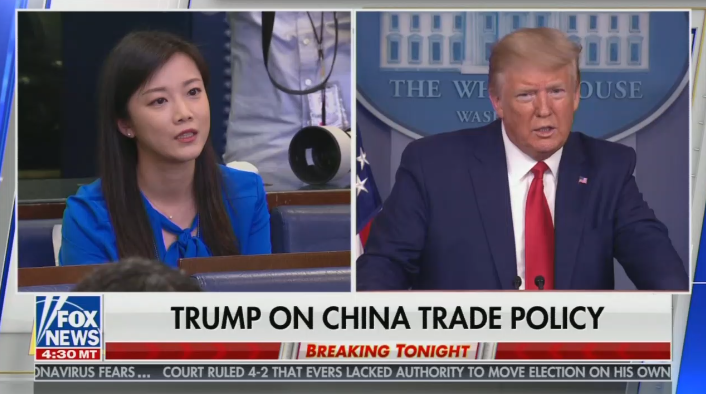 At Monday’s coronavirus press conference, President Trump sparred with a female reporter from the Hong Kong-based news outlet, Phoenix TV. Following her question that portrayed China as heroes coming to the aid of the United States, the President pressed her on who she worked for and whether they were in league with the communist regime. This drew outcry from American reporters such as PBS White House correspondent Yamiche Alcindor and CNN national security correspondent Vivian Salama.

“Last week, there were multiple flights coming from China for medical supplies, companies like Huawei and Alibaba have donated to the United States. Like 1.5 million N95 masks, also a lot of medical gloves and much more medical supplies,” the reporter said. To which, Trump retorted: “It's a statement more than a question.”

After the reporter asked if he was “cooperating with China,” Trump grilled her on who she worked for. “Who are you working for, China? Who are you with?” Trump followed up and asked about who owned the company. The reporter claimed it was “a private company.” Those inquiries sent journalists into a tailspin.

“President Trump just asked a reporter from Phoenix TV which is based in Hong Kong repeatedly if she's working for China. She said she works for a private company in Hong Kong that is not owned by the state. Trump said, ‘OK[sic] good,’” Alcindor wrote in a tweet.

Salama was more overt with trying to insinuate Trump was a racist. “President Trump just asked an Asian reporter, who asked a question about China, if she is working for China. When she said she works for a Hong Kong newspaper, he asked if it is owned by China. No, she told him.”

Neither of them did the necessary leg work to follow up on their tweets research whether or not what the reporter claimed was true. Fortunately, our friends Peter Hasson and Chuck Ross over at the Daily Caller did, and she was lying.

Hasson had rediscovered a Washington Free Beacon article from August 2018 that reported: “Phoenix TV has been identified by U.S. intelligence agencies as a major overseas outlet used to spread propaganda and promote the policies of the communist government in Beijing.”

From his research, Ross reported that think tanks such as The Hoover Institution and Freedom House had determined Phoenix TV had ties to the Chinese government. The former called them a “quasi-official” news agency, and the latter showed they were owned by a former Chinese military officer and aired Chinese Communist Party propaganda such as coerced confessions.

The juxtaposition of the entire situation was surreal. Salama works for a news outlet that’s constantly claiming Fox News was “state TV,” Alcindor works for a government-funded news outlet, and they’re defending someone who pushes CCP propaganda. You can’t make this stuff up.