Nets All But Ignore Second Day of Trump Defense, Gush for Bolton Book 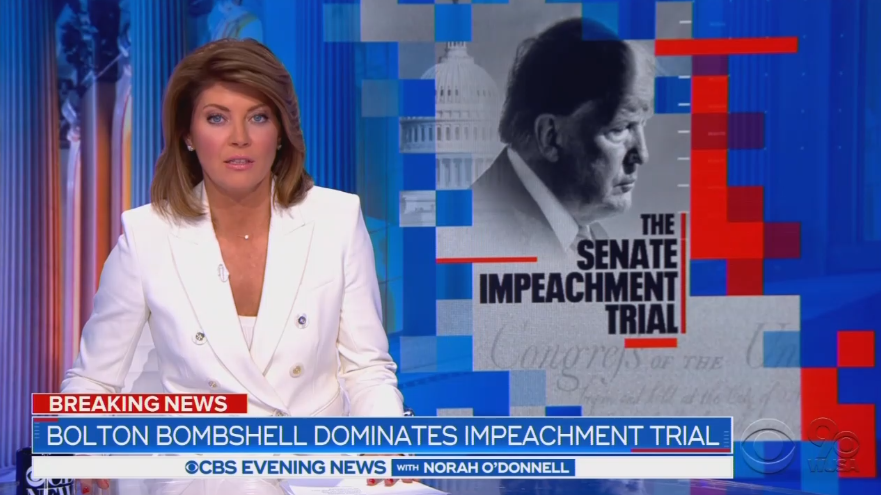 Monday was day two for President Trump’s defense in the Senate impeachment trial and it was the first full day for his legal team to layout their fact-based arguments for acquittal. Yet, the evening newscasts of ABC, CBS, and NBC chose not to air their arguments, as they did with House Democrats. Instead, they chose to disregard the defense in favor of pouncing on reported allegations made in the conveniently timed leak of former national security advisor, John Bolton’s yet to be released book.

Out of their almost 12 minutes of combined time dedicated to all things related to impeachment (11:51), only two minutes and 37 seconds (22%) were allocated to the arguments Trump’s legal team made on the floor of the Senate. The rest was allocated to gushing about Bolton’s book and how it had “upended” the trial and things related to it.

ABC’s World News Tonight slotted two minutes, 33 seconds for impeachment with only 44 seconds of that (28%) allowed for the legal team’s hours-long defense, which still had hours to go. With anchor David Muir touting the book as a “bombshell,” senior congressional correspondent Mary Bruce began her report by showing off a video of “John Bolton, smiling and waving to cameras this morning after upending the impeachment proceedings.”

According to her, “[The book] directly contradicts what the President's defense team has been arguing.”

Over on CBS Evening News, they focused on impeachment the most by dedicating over six minutes (6:12) to the topic. But of that six minutes, they only covered Trump’s legal team for a meager 34 seconds, or only nine percent of the airtime.

“An explosive claim from President Trump's former national security adviser has blindsided Senate Republicans and thrown the President's hopes of a quick impeachment trial into doubt,” anchor Norah O’Donnell hyped at the top of the segment. Chief congressional correspondent Nancy Cordes began her report by saying, “President Trump denied today the bombshell threatening to blow up his case.”

Despite the facts that Trump lawyer Michael Purpura showed during his time on Monday, regarding numerous instances of planned meetings with the president of Ukraine with no preconditions and other exculpatory information during the 2:00 p.m. hour, Cordes added that the book “backs up what other witnesses have said and runs counter to claims the President's defense team continued to make today.”

CBS also failed to disclose that they're owned by the same parent company as the publisher of Bolton's book, Simon & Schuster.

As for NBC Nightly News, they were the outlier. They spent three minutes and six seconds on impeachment, and over a third of that time (1:16) was given to the arguments of Trump’s legal team. “The President's attorneys addressing the senators in the chamber today but not the elephant in the room,” reported chief White House correspondent Hallie Jackson. “John Bolton and his bombshell book dropping like a grenade in the words one source close to the White House.”

Regarding The New York Times reporting on the manuscript of the book, which the networks were basing their reporting off of, Jackson admitted: “NBC News has not seen it.” She also noted the suspicious timing: “[The book] became available for preorder the same day the report emerged…”

In addition, Spanish-language networks Telemundo and Univision spent three minutes and 11 seconds on all things impeachment related and gave zero time to the President's legal team and their arguments.

Monday was the day Trump’s legal team presented their strongest arguments for acquittal. Unfortunately, the liberal broadcast networks had a new shiny bauble that occupied their attention.

DAVID MUIR: But we move on to the other news tonight, and to that bombshell report involving former national security advisor John Bolton and President Trump. Will it upend the impeachment trial? Will it lead to witnesses? The New York Times reporting on the draft of the book by Bolton. And in it, Bolton claims that the President told him withholding aid to Ukraine was tied to investigations into Joe Biden. Tonight, the President responding and what senators are now saying about possible witnesses about the trial tonight. Mary Bruce on the hill again tonight.

BRUCE: According to The New York Times, Bolton writes in his upcoming book that President Trump personally told him he wanted to continue freezing nearly $400 million in security aid until Ukraine helped to investigate his rivals, including Joe Biden. It directly contradicts what the President's defense team has been arguing.

MICHEAL PURPURA: There was no connection between security assistance and investigations.

BRUCE: Bolton's reported first-hand account is sending a seismic shock through Capitol Hill where senators will have to decide whether to allow him as a witness.

BRUCE: But the President's lawyers argue senators should focus on the evidence from the house investigation and nothing more.

MUIR: And Mary, you're learning tonight they're now preparing for the possibility of a trial with witnesses, the President's team?

BRUCE: David, sources tell us that tonight, the President's team is preparing for the very real possibility that Bolton may be called to testify and they are ready to fight it in court.

NORAH O’DONNELL: Now here to Washington. An explosive claim from President Trump's former national security adviser has blindsided Senate Republicans and thrown the President's hopes of a quick impeachment trial into doubt. Nancy Cordes with new reporting on the likelihood there will be witnesses.

CORDES: The manuscript that was sent to the White House several weeks ago was written by former National Security Adviser John Bolton. According to The New York Times, Bolton writes in his forthcoming book that Mr. Trump told him he wanted to freeze aid to Ukraine until officials there helped with investigations into the Bidens. That backs up what other witnesses have said and runs counter to claims the President's defense team continued to make today.

MICHEAL PURPURA (President Trump’s Legal Team): There was no linkage between security assistance and investigations.

CORDES: The White House warned today that Mr. Trump would seek to block Bolton from testifying by asserting executive privilege.

CORDES: Some Republicans predicted that the push to hear from witnesses at this trial will grow.

CORDES: Today the defense team turned to Ken Starr, whose investigations helped lead to the impeachment of President Clinton.

CORDES: Three Senate Republicans reiterated today that they support hearing from witnesses and a potential fourth, Pennsylvania's Pat Toomey is trying to pitch his GOP colleagues on a potential one-for-one swap. Bolton's testimony in exchange for testimony from a witness they want to hear from.

LESTER HOLT: But right now we want to turn to that bombshell allegation from John Bolton as President Trump's legal team made their second day of argument in the impeachment trial, the President is denying claims in Bolton's forthcoming book that contradicts his defense. With more on that here is Hallie Jackson.

JACKSON: The President's attorneys addressing the senators in the chamber today but not the elephant in the room. John Bolton and his bombshell book dropping like a grenade in the words one source close to the White House.

The former national security advisor reportedly claiming the President explicitly linked military aid to Ukraine to investigations into his political rivals like the Bidens, according to a manuscript of Bolton’s upcoming book reported by The New York Times citing multiple sources who reviewed the draft. NBC News has not seen it, with the President today repeatedly denying the allegation.

JACKSON: But the President's allies dismiss Bolton, who the President says he fired last year, as a disgruntled opportunist looking to sell his book. It became available for preorder the same day the report emerged, though Bolton’s aides deny any coordination.

JACKSON: The President's attorneys making only an indirect reference on day two of their impeachment opening arguments.

JAY SEKULOW (President Trump’s Legal Team): We do not deal with speculation.