ABC/NBC: Iran Warnings a ‘Real Test’ of Trust in Trump, Might Be 'Faulty' Intel 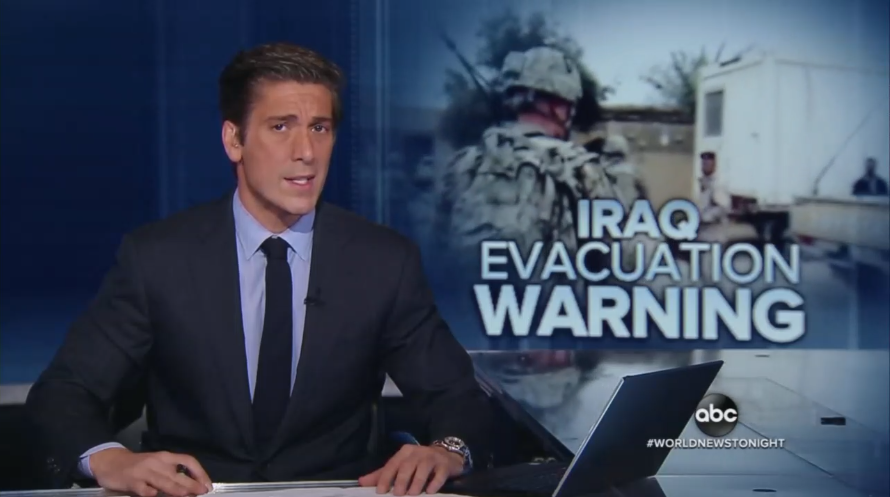 The USS Abraham Lincoln and its battle group were speeding to the Persian Gulf, U.S. military bases in the Middle East were on high alert, and then on Wednesday nonemergency staff for the U.S. Embassy in Iraq were ordered to leave because the U.S. had intelligence of an “imminent” Iranian-backed attack. But the liberal media, which often carries water for the regime, was skeptical. ABC News suggested it was “faulty” intel akin to the Iraq War. NBC News claimed it’s a “real test” of President Trump’s credibility.

While the other broadcast networks only cast their suspicions on the warnings, claiming they weren’t specific, CBS Evening News and Pentagon correspondent David Martin uncovered the possible threat. He told viewers the U.S. was “reacting to intelligence reports, Iranian-backed militias in Iraq are moving rocket within range of U.S. outposts…”

According to Martin, even though Democrats on the Senate Foreign Relations Committee still wanted to see the intelligence, Utah Senator Mitt Romney (R) had been briefed and he saw the threat. “Iran may be considering some kind of malevolent activity relative to our interests and our people in the region,” he told the press as he walked down a Senate hallway.

“U.S. officials say they have pictures of Iranian boats carrying short-range ballistic missiles, normally based on land, operating in and out of the Port of Chabahar, as if they were being readied for deployment,” Martin added.

Now that those facts are out there, let’s look at how the other broadcast networks claimed was going on.

“Senators on both sides of the aisle are now demanding to know, what is this new threat? In fact, a British general has said he does not believe that there's a new threat in Iraq,” announced ABC’s World News Tonight anchor David Muir.

ABC chief global affairs correspondent Martha Raddatz claimed: “[T]he administration is providing no specifics and even the President's supporters are frustrated.” “Tonight, there are fears the American intelligence may be faulty, just as it was in the lead up to the invasion of Iraq,” she dubiously suggested.

Only towards the end of her report did Raddatz admit that “congressional leadership will be briefed tomorrow”.

For NBC Nightly News, chief foreign affairs correspondent Richard Engel, who previously concocted a conspiracy theory suggesting this was a ploy to start a war on behalf of Israel, now points to “a top British general yesterday directly contradicted U.S. warnings of a threat from Iran.” Raddatz also did this.

Engel seemed enthusiastic to report on how some of our allies didn’t want to support the U.S. against these possible attacks. “Germany and the Netherlands made clear they want no part in a possible conflict; suspending military training missions in Iraq,” he noted. “Spain went so far as to pull a warship from the U.S. aircraft carrier battleground sent to the region earlier this month.”

He wrapped up by opining about “how this crisis with Iran has become a real test of the Trump administration's credibility among our allies.”

Meanwhile, the facts were out there and CBS found them.

DAVID MUIR: Next tonight, amid escalating tensions with Iran, the U.S. State Department is ordering all nonemergency workers out of the U.S. Embassy in Iraq because of what the Trump administration considers an imminent threat from Iran or its proxies. But tonight, Senators on both sides of the aisle are now demanding to know, what is this new threat? In fact, a British general has said he does not believe that there's a new threat in Iraq. Here's ABC's chief global affairs correspondent Martha Raddatz now.

MARTHA RADDATZ: The U.S. Embassy in Baghdad is one of the largest and most secure in the world, with thousands of employees. But tonight, all nonessential personnel are being ordered out. A U.S. official saying there is "An imminent threat" by Iranian-backed proxies. But the administration is providing no specifics and even the President's supporters are frustrated.

SEN. LINDSEY GRAHAM: I have no idea what the threat stream is beyond what I read in the paper.

RADDATZ: The move to evacuate some embassy employees comes the day after a senior British general declared, "There's no increased threat from Iranian-backed forces in Iraq," which the U.S. military rebutted.

Tonight, there are fears the American intelligence may be faulty, just as it was in the lead up to the invasion of Iraq. The U.S. already deployed a carrier strike group and bombers to the region to defend against a potential attack from Iran or its allies. The President has denied a New York Times report the administration has a plan to send 120,000 troops if attacked.

PRESIDENT TRUMP: Now, would I do that? Absolutely. But we have not planned for that.

MUIR: Martha Raddatz with us live from Washington tonight. And Martha, members of Congress from both parties are demanding that the administration spell out exactly what this threat from Iran is tonight?

RADDATZ: They are, David. And congressional leadership will be briefed tomorrow, but David, this ordered departure from the U.S. Embassy in Iraq really is unusual. I have spent time in that Baghdad embassy during a very violent period when ISIS was launching rockets at the facility, but this is the first time I remember the State Department ever ordering a departure of personnel from that embassy. So, a lot of questions about what led them to do this. David?

MUIR: And we know you'll stay on this for us. Martha, thank you.

LESTER HOLT: We’re going to turn now to the urgent warning to American embassy workers to Iraq. The State Department advising some of them to leave now after the U.S. cited an imminent threat from Iran. But now, a top U.S. ally is pushing back on those claims. Let’s get more from NBC’s Richard Engel.

RICHARD ENGEL: Tonight, U.S. tensions with Iran are still rising. All non-emergency personnel have been ordered to leave the U.S. Embassy in Baghdad and the consulate in northern Iraq immediately. And CenCom has placed thousands of U.S. troops in Iraq and Syria on high alert, citing unspecified, quote, “credible threats” that Iranian proxies could attack U.S. forces.

In Iraq, Iran backed militias are widespread including in Iraqi security units. Just last week, Secretary of State Mike Pompeo made a surprise visit to Baghdad and spoke about Iran.

MIKE POMPEO: These were attacks that were imminent.

ENGEL: But a top British general yesterday directly contradicted U.S. warnings of a threat from Iran.

MAJ. GEN. CHRIS GHIKA: No, there is no increased threat from Iranian backed forces in Iraq and Syria.

ENGEL: Germany and the Netherlands made clear they want no part in a possible conflict; suspending military training missions in Iraq. Spain went so far as to pull a warship from the U.S. aircraft carrier battle ground sent to the region earlier this month.

While tonight, the U.S. Is still investigating those mysterious attacks on oil tankers near the Persian Gulf. Iran has denied responsibility.

Responding to the skepticism, State Department officials tonight insisted the threats are real and came within the last week. But it also shows how this crisis with Iran has become a real test of the Trump administration's credibility among our allies. Lester?