Todd Cautions Against Running Fairfax Out of Office Without an Investigation 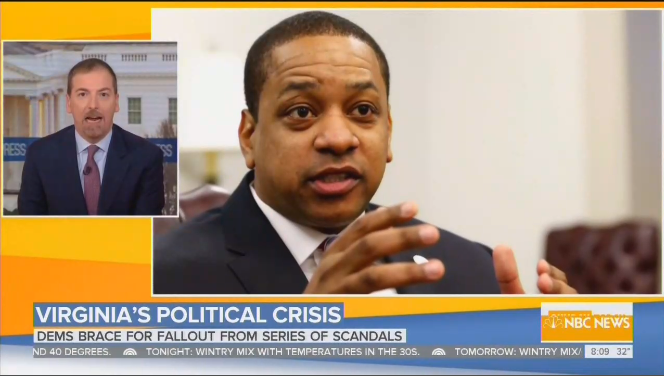 Over the weekend, the chaos gripping Virginia politics evolved yet again with a second sexual assault allegation against Lieutenant Governor Justin Fairfax. With Virginia’s top three officeholders (all of whom were Democrats) facing calls for their resignations, NBC moderator Chuck Todd took to Sunday Today to caution against running Fairfax out of office before an investigation could be conducted. Yet, with Justice Brett Kavanaugh, Todd was telling him to pack it up before the hearing.

Todd’s Sunday advice came after he noted that a Washington Post poll out that morning found that Virginians were “split right down the middle, 47-47” in regards to Governor Ralph Northam resigning for his blackface scandal.

“It adds more pressure, I think, to the Lieutenant Governor. But even there I think you got to give -- you got to have an investigation,” he declared. “I mean you cannot -- I think at the end of the day if he's chase out of office without an investigation, that is not going to sit well with a bunch of folks either.”

Seemingly in agreement, host Willie Geist pointed out how “[s]o many Democrats are not waiting for an investigation, including presidential candidates who said Fairfax has to resign.”

The hypocrisy was strong with Todd. Just looking back to the fall of 2018 and the outlandish sexual misconduct allegations against Justice Brett Kavanaugh, that NBC help to spread, Todd was eager to get rid of Kavanaugh’s nomination before the Senate even held a hearing.

Describing the upcoming hearing as a “tinder box” and “four sticks of dynamite wrapped in radioactive material”, Todd was looking for Kavanaugh to reject the nomination:

He also didn’t believe there was a good outcome to be had for Kavanaugh. “I have to say, I'm trying to visualize this event and I can't come -- I can’t figure out how this event is helpful to Brett Kavanaugh,” he claimed at the time. Adding: “What does that mean? I think that's in the eye of the beholder. But I feel as if this confirmation gets that much harder.”

And on the day of the hearing, Kavanaugh hadn’t even testified yet before Todd was declaring the time of death for his nomination and envisioning the next move:

The crass political move, you pull it. You name Judge Amy Coney Barrett. She probably can’t get confirmed. It wouldn't matter because you aren’t fighting the confirmation before the election. See if her nomination fires the base, and you sort of use the new nominee as a way to fire up the Trump base, and do that.

Even after the FBI had conducted an investigation (like what Fairfax had called for) had found no corroborating evidence to the charges, Todd was still hoping for GOP senators to sink him. After the vote for cloture, Todd thought he saw Republican defections. “All these people will be yes today, but I think tomorrow — and, you know, don't discount there are some wobblier Republicans that haven't gotten a lot of attention.”

After Kavanaugh was confirmed, Todd was like Chicken Little running around and claiming the Supreme Court was ruined:

And I think the one thing we haven't fully comprehended is: if this is how we're going to conduct supreme court hearings going forward, it means that at any point in time depending on which party has appointed the most at any point in time, half the country is going to think it's a political decision out of the Supreme Court not a rule of law decision. The long-term consequences of that we haven't fully comprehended.

Thanks to the extensive documentation by the Media Research Center, the timeline of Todd’s hypocrisy was clear. One of the largest differences between Kavanaugh and Fairfax? Their party affiliation.

WILLIE GEIST: Chuck, let's start in Virginia, you and I sat here a week ago at this time and were not sure the Governor was going to make it to the end of the show before he had to resign.

GEIST: Well, he's still standing and he says he’s not going anywhere now because of the new scandal: two sexual allegations against the lieutenant governor of that state, who also says he's not going anywhere until there is an FBI investigation. This has reached into the presidential campaign with candidates being asked about it, calling for Fairfax resignation, where does it end in Virginia?

TODD: Well, I think we’re in a bit of a pause. I think this new poll this morning in The Washington Post is going to reinforce Governor Northam belief that he made the right decision not to resign. There is a split right down the middle of 47-47, about whether he should stay for go. And I think there’s a lot of – a lot of politicians, frankly, were probably waiting to see how was the state -- how are voters reacting to this.

And, so. In many ways, that poll buys everybody time. It probably is going to relieve some of the pressure off of Northam. In fact, in that same poll, a majority of African-Americans said he should stay in office. So, that should relieve a little bit of pressure. It adds more pressure, I think, to the Lieutenant Governor. But even there I think you got to give -- you got to have an investigation. I mean you cannot -- I think at the end of the day if he's chase out of office without an investigation, that is not going to sit well with a bunch of folks either.

GEIST: Interesting. So many Democrats are not waiting for an investigation, including presidential candidates who said Fairfax has to resign.