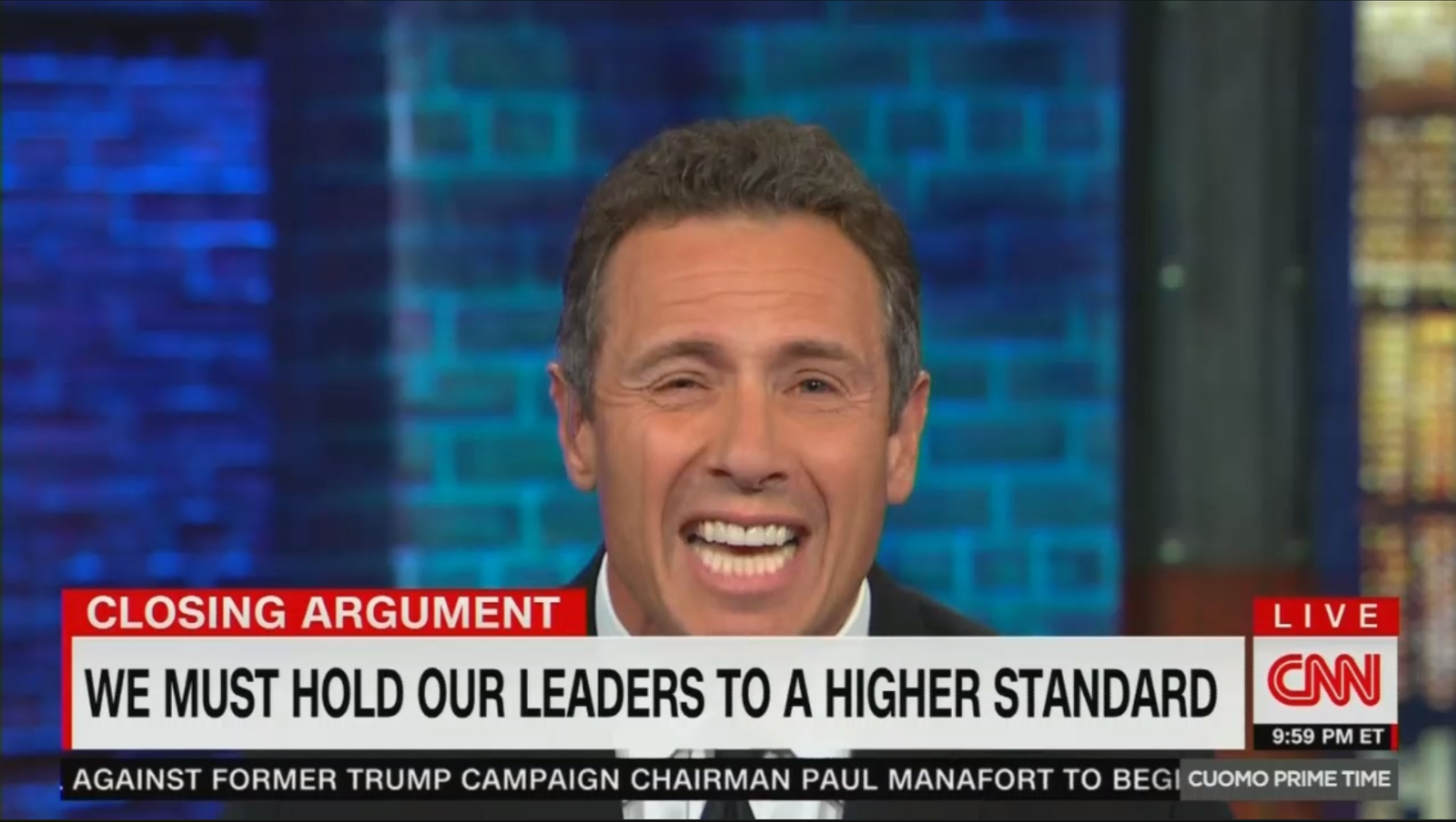 2018 was the first year of one of CNN’s most divorced from reality programs, Cuomo Prime Time. With the show going fulltime, host Chris Cuomo was moved from CNN’s New Day in the morning to his new nightly prime-time show (which routinely gets outperformed by its competitors in the ratings).

Cuomo once claimed his show was part of the network’s “facts first” initiative. And he’s really made a name for himself there as he bitterly rages at President Trump while spreading lies and misinformation. These are just a handful of the lies and disturbing declarations from the apoplectic host presented chronologically. So, let’s get after it.

On July 3, Cuomo dipped into some conspiracy theories (it wouldn’t be his last) and suggested the reason President Trump refused to order flags lower to half-staff after the tragic Capital Gazette shooting was because he hated the press.

“And yes, Trump did say that he respects journalists after the mass murder, but why would you believe that? Why would you believe he's not lying again,” he spat. “I don't have time to play all the attacks on the media, you know the truth. And now you know even if they get murdered, the President won’t respect the media appropriately.”

After President Trump sent out yet other tweet criticizing the media, Cuomo set aside time at the end of his July 20 show to lash out at the President. “This is ugly and it is unoriginal. But most importantly, it is an admission that you hate your country,” he declared. On top of that, he seemed to suggest it meant Trump wanted media folks hurt:

How so? Here's the case. You know this phrase was an operative threat to murder opposition in the French revolution, right? You know Khrushchev identified the phrase as part of a campaign to annihilate individuals, literally, who disagreed with the supreme leader. His predecessor, Stalin used it specifically with artists and thinkers that threatened his narrow views of humanity. Did you know Mao used it during his murderous campaigns?

Following Pope Francis’s amendment to the Catholic Church’s view of the death penalty on August 3, Cuomo, the proverbial New York liberal elitist, decided to lecture pro-life forks on what it really meant to be pro-life.

“The smart part is squaring the logic of being pro-life. If you believe you don't mess with life in one area, you don't mess with it period. It’s logical. And it plays to an inconsistency that we see here in America,” he opined. “Many who call themselves pro-life are also pro-death penalty.”

Cuomo Justifies Antifa Violence Saying Left Has 'Morality' On Their Side

One of Cuomo’s most disgusting moments occurred on August 14 when he tried to justify Antifa violence citing their superior morality compared to white supremacists.

“But I argue to you tonight, all punches are not equal morally,” Cuomo stated, “Now, how you fight matters too. There's no question about that. But drawing a moral equivalency between those espousing hate and those fighting it because they both resort to violence emboldens hate, legitimizes hateful belief and elevates what should be stamped out…”

But the next night, he scolded Trump for the words he used. Words = bad, violence = good. It’s no wonder he’s no longer a practicing lawyer.

Cuomo Prefers Obama to Trump: 'America at Her Best...Leads With Her Heart, Not Her Hate'

On September 9, Cuomo shared how he was really more of an Obama kind of guy:

Trump can’t get to 50 percent his way. Despite a historic economy and list of achievements a mile long by his own reckoning, rallies with the thousands. His problem? Thousands ain’t millions. He cannot get the majority of you to be with him. Not in the election, and not now. Obama was at 60 percent on the way out. His highest was over 70. His lowest around where Trump is at his best in the main. Why? I argue a bigger notion than numbers…nature. America at her best by her nature leads with her heart, not her hate.

CNN’s Raging Cuomo Lashes Out, Smears Kavanaugh, Lies About Him

During the Brett Kavanaugh hearings in early October, Cuomo hit new levels of insufferableness. Almost nightly, Cuomo would launch into tirades against the Supreme Court candidate filled with lies and misinformation including claiming Kavanaugh said things he never said.

“We’ve never seen such an overtly political play by a nominee, let alone one who's fighting back criticism that he is too political. But here we are steeped in irony and animosity,” Cuomo spat. “He says his past ‘has been ridiculously distorted.’ Yeah. But by whom is the question. He chose to mislead about what he wrote in high school and college,”

Speaking of possible reasons why Cuomo doesn’t practice law anymore, in the midst of the Kavanaugh hearings he demanded that the Judge not be granted the presumption of innocence.

“Now look, I don't know who wrote it but the presumption of innocence is a valued, valued construct in a court of law. We were not in a court of law,” he ranted. “This was a kangaroo court. You know, politicians fighting over a position on the Supreme Court.”

Conspiracy Cuomo Speculates on Trump’s Financial Ties to the Saudis

Another instance of Cuomo dipping into conspiracy theory territory, on October 12 he used his whiteboard to concoct a scenario where the Saudis were paying Trump off to let them kill Washington Post writer Jamal Khashoggi.

“Is any of it financial? Does MBS know something about business ties that he may feel motivated by and have leverage? Why would I speculate that way,” he unironically asked the camera. “Because Trump has done plenty of business with the Saudis, and in fact, he has called that business a factor for his forgiveness and like of them.”

As the infamous migrant caravan was bearing down on the U.S.-Mexico border, President Trump sent the military down there to aid Border Patrol in preparing for their arrival.

According to Cuomo, those troops were ready to mow down the women and children of the caravan. “Rick, if you put military down there, we know what the god forbid is in this situation. And then how does it play,” Cuomo began. “How is that good for anybody if -- because you're not going to turn away thousands and thousands of people, even if people start getting shot. And what message does that send? Who wins in that?”

More on the misinformation front. After a “computer glitch” led the Department of Veterans Affairs to not send out G.I. Bill payments to deserving veterans, Cuomo exploited the opportunity to falsely claim Trump had never done anything of substance for our vets and blamed him for the VA’s decades of dysfunction.

“If he's done so much, why the G.I. Bill mess? Why the VA mess? Why no real help for suicide and mental health treatment as was promised,” Cuomo demanded to know.

Cuomo: U.S. Celebrating Thanksgiving in a Time of ‘Illness’, ‘Depredation’ Like Pilgrims

Finally, but least. Just before the country was set to celebrate Thanksgiving, Cuomo used his “Closing Argument” (still pretending to be a lawyer) segment to claim we were celebrating the holiday during one of the worst times in American history.

“This national day to give thanks was actually designed for times just like those we are living. I'll prove it,” he began his long-winded rant. “In fact, the designers of the day would insist on that. Yes, it was actually done as an offset, a reminder of gratitude during the worst of times. In fact, especially then.”

It was really difficult to whittle the list down to just 11 moments. And there’s no telling what Cuomo is going to spew in 2019.