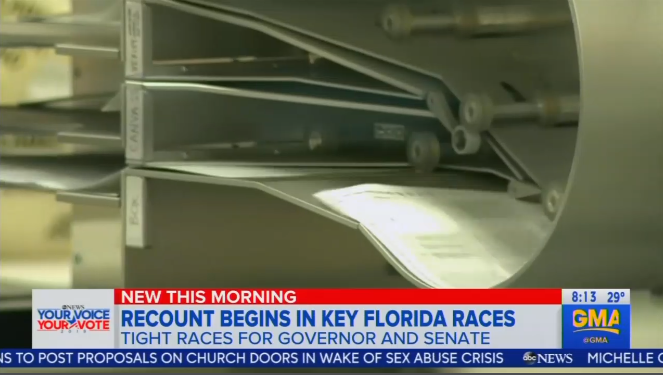 As the contentious Florida gubernatorial and U.S. Senate races moved on to a mandatory machine recount, they do so under a cloud corruption as Democratic election officials were accused of voter fraud and other forms of misconduct. Despite the fact that Florida courts had already ruled twice against Democrats, ABC’s and NBC’s Sunday morning news programs ignored the orders for transparency. The networks preferred to keep the truth hidden.

In sharp contrast, their network competitor, CBS News, wasn’t afraid to tell the truth. In a report out Friday, they told readers that Florida Governor Rick Scott won both of this lawsuits. In the lawsuit against Palm Beach County Elections Supervisor Susan Bucher, the county court found that the Democrat was illegally withholding over-votes and under-votes from the county canvassing board and barring public viewing of counting.

On top of that, “Scott also filed a lawsuit against Broward County Elections Supervisor Brenda Snipes on Thursday evening, alleging that her office is hiding information about the number of ballots left to be counted.” Again, the court ruled in his favor as Snipes kept ‘discovering’ new ballots.

During ABC’s Good Morning America, they tried to hide the truth. In his report, correspondent Victor Oquendo noted that “lawsuits have been filed by both camps” but never mentioned the Florida courts’ ruling in the GOP’s favor. Instead, he pitched it as a war of words between candidates.

“Scott claims Nelson is trying to steal the election. Tweeting: ‘It’s time Senator Nelson accepts these results and allows the state of Florida to move forward to a better future.’ While Nelson accuses Scott of attempting to stop officials from counting every ballot,” he said.

That depiction of the fight for Florida was that same on NBC’s Sunday Today, where correspondent Morgan Radford said:

In the race for U.S. Senate, Florida’s current Governor, Republican Rick Scott with a stern warning urging the state's sheriffs to, quote, “watch for any violations and take appropriate action”. Incumbent Democratic Senator Bill Nelson saying, “this process is about one thing, making sure every legal ballot is counted”.

Radford touted the protests in Broward County. NBC spoke to one unidentified woman in an Andrew Gillum shirt, who opined: “We are standing up for our rights to have every vote to be counted, which I think nobody on either side should ever oppose.” “Meanwhile, President Trump has weighed in claiming the Democrats are trying to steal this election,” Radford huffed.

Their dismissal of the accusations of misconduct against Democrats comes after Broward County Elections Supervisor Brenda Snipes was caught “accidentally” (according to the Miami Herold) mixing invalid provisional ballots in with valid ones. There have been at least 12 documented occasions in the last four years that Snipes had acted in a way that was “incompetent and possibly criminal”.

Neither ABC nor NBC reported these objectionable actions by shady Democrats. It’s part of a disturbing trend by the liberal media to obfuscate what’s actually going on in Florida and to actively suggest any questions otherwise was a part of some conservative conspiracy theory.

DAN HARRIS: We are now though going to move on to the other big story of the morning. It is official five days after the polls closed we're heading into another recount in the crucial swing state of Florida.

EVA PILGRIM: Slim margins of victory in two major races including one for Senate and the other for governor are triggering mandatory recounts. ABC's Victor Oquendo has more.

VICTOR OQUENDO: This morning, the fight from Florida is far from over. The secretary of state ordering a recount in races still too close to call. State law requiring a machine recount when the leading candidate's margin is half a percentage point or less. In the governor's race, Ron DeSantis held a slight lead against his Democratic rival Andrew Gillum of about 33,000 votes falling under that half point threshold. And for U.S. Senate it's even tighter. Republican Governor Rick Scott ahead of Democrat Senator Bill Nelson by .15 percentage points. About 12,000 votes out of more than 8 million ballots cast. Anger from those on both sides of the political divide pouring out on the streets with accusations of voter fraud, voter suppression, and abuse of power. Gillum conceded to DeSantis on election night, but with results narrowing, a reversal.

OQUENDO: In the contentious battle for the Senate, where lawsuits have been filed by both camp, Scott claims Nelson is trying to steal the election. Tweeting: It’s time Senator Nelson accepts these results and allows the state of Florida to move forward to a better future. While Nelson accuses Scott of attempting to stop officials from counting every ballot.

WILLIE GEIST: Back here at home, the results of some of Tuesday's most significant midterm elections remain in question this morning. A recount now has been issued for the Senate and governor's races in Florida. Officials have until Thursday now to get those recounts done. NBC's Morgan Radford is here in studio with us. Morgan, good morning.

MORGAN RADFORD: Willie, good morning. After a record-breaking midterm election season, Florida is headed for the first full statewide recount in its history. This morning, five days after Election Day, drama in the sunshine state. Florida's secretary of state ordering a machine recount in the races for governor and U.S. Senate. The margins in both less than a half percent making the recount mandatory. The Republicans narrowly leading in both races. Days after he conceded the race for governor --

RADFORD: In the race for U.S. Senate, Florida’s current Governor, Republican Rick Scott with a stern warning urging the state's sheriffs to, quote, “watch for any violations and take appropriate action”. Incumbent Democratic Senator Bill Nelson saying, “this process is about one thing, making sure every legal ballot is counted”.

Protests in the streets of Broward County.

UNIDENTIFIED WOMAN: We are standing up for our rights to have every vote to be counted, which I think nobody on either side should ever oppose.

RADFORD: In addition to the race for senator and governor, there's also a recount for Florida's agriculture commissioner. Meanwhile, President Trump has weighed in claiming the Democrats are trying to steal this election. Willie?

GEIST: Chuck Todd is NBC's political director and moderator of Meet the Press. Chuck, good morning. I don't mean to trigger you as someone who's both from Florida and covered the 2000 election, Florida recount, any chance the outcomes are changed here by these recounts?

CHUCK TODD: Boy, I'll tell you, I've never seen a recount -- I've never seen someone overcome 12,000 votes in a recount, which is approximately what bill Nilsson would have to overcome let alone the approximately 30,000 margin Andrew Gillum would have to overcome. On one hand, it's a tiny slice when you think of 8 plus million voters, but that’s still a lot of vote to find in a recount. Unless there's some machine error that is found, that under-vote in Broward County, if it really is significant, but on paper, it looks like it's a difficult process for the Democrats. But I think because of their base and the animated aspect of that, I think they have to fight until the end.