[UPDATE] ‘We Know Where You Sleep’: Antifa Mob Targets Home of Tucker Carlson 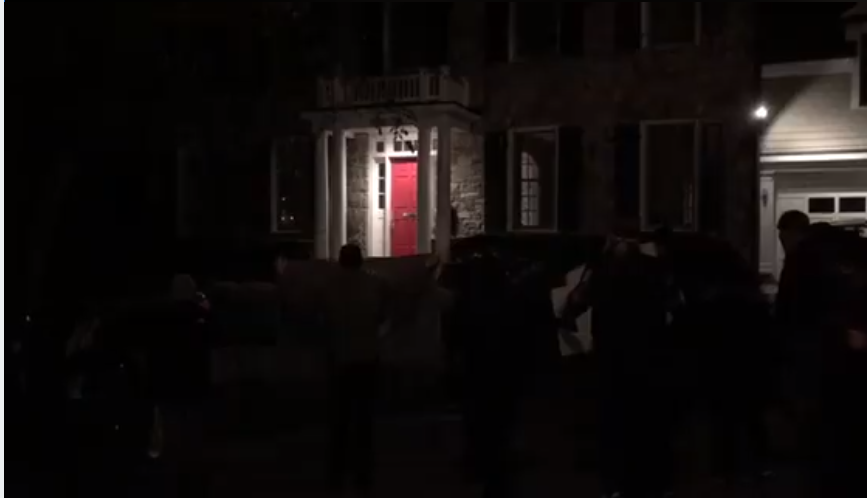 Shortly before Fox News Channel host Tucker Carlson was set to begin Wednesday’s edition of his show, a mob of Antifa protestors descended on his Washington, D.C. area home to threaten him and his family with violence.

The group known as “Smash Racism DC” on social media posted a video of their antics on Twitter, which had since been deleted by the site. But the video could still be found on Facebook. In the video, radical leftist agitators can be heard threatening Carlson and his family by chanting: “Tucker Carlson, we will fight! We know where you sleep at night!”

The video also showed an unknown person running up to Carlson’s house to apparently ring his doorbell (and leave a note, according to The Daily Caller) as another person with a megaphone shouted, “Tucker Carlson, we are outside your home to protest [inaudible] fascism and racism.”

“You promote hate and play to an ideology that has led to thousands of people dying by the hands of the police, to transwomen being murdered in the streets,” the megaphone wielder continued. “Your policies promote hate and we want you to know we know where you sleep at night.”

The radical leftists seemed completely unaware that the reason no one answered the door (and all the lights inside the house appeared to be off) was because he was at the studio preparing to start his show. One would think they knew that already because the group claimed Carlson “spread[s] fear” into their homes “every night.” Perhaps they don’t actually watch his show. Hmmm.

While the original Twitter posts no longer exist, the National Review’s Jack Crowe managed to document their contents. “Tucker Carlson has been spewing nonstop hate and lies about the migrant caravan. He also has close ties to white supremacists,” one tweet said. “Activists protested tonight at Carlson’s Washington DC area home. You can’t hide from those you hurt, Tucker.#KnockKnockTucker”

Crowe also noted that “[t]his particular group of left-wing agitators has previously targeted a number of prominent Republicans for public harassment, including most recently Senator Ted Cruz of Texas, who was chased out of [a] restaurant in downtown Washington, D.C., along with his wife in late September.”

“This is our world, all of ours. White supremacy should have no home. Fascist pundits who promote violence deserve no peace,” the radicals concluded on Facebook.

This event comes following incessant liberal media assertions that radical leftist mobs do not exist and left-wing protesters were not threatening. And as Daily Wire founder Ben Shapiro noted on Twitter as this took place the same night in which CNN's Jim Acosta lost his White House credentials, “Acosta vs. Tucker coverage disparity on CNN will be fascinating.”