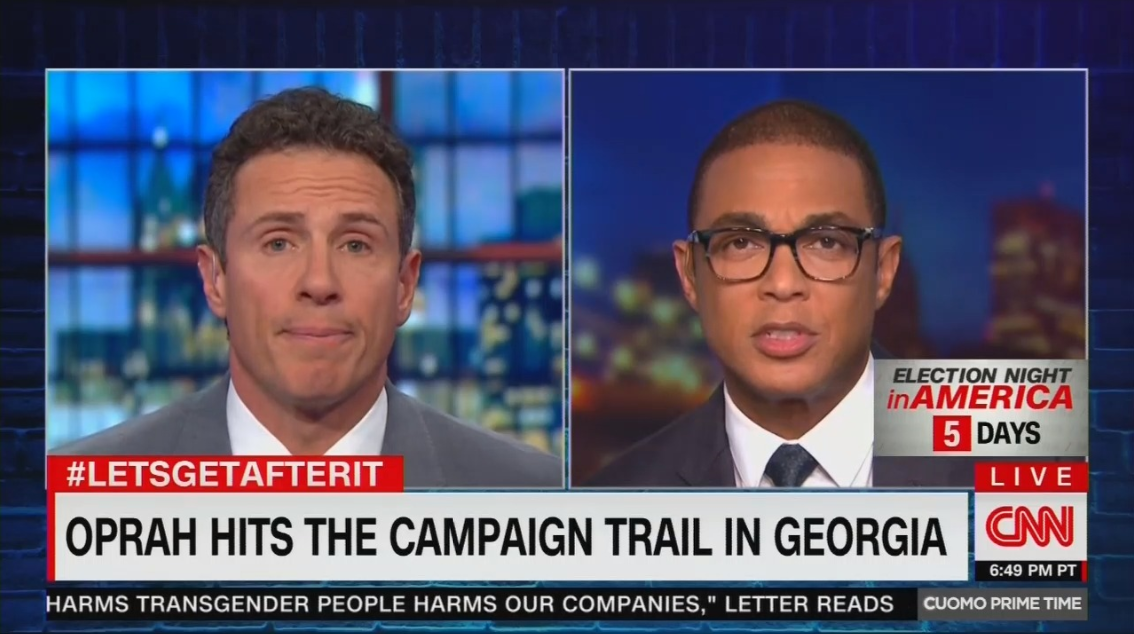 It’s always funny when a member of the liberal media pretends that they’re not in lock step with the Democratic Party. During the later portion of CNN’s Cuomo Prime Time, incendiary CNN host Don Lemon proclaimed that he didn’t belong to any political party and was an “Independent” just like Democratic Party campaign star Oprah Winfrey.

“I love the spirit of Oprah's speech today, who is an independent. She's sick of political parties like me,” Lemon claimed to host Chris Cuomo. “I’ve been an independent for a long time. Don't I own my own mind and my own vote, and don't tell me who to vote for.” He also boasted that he had just cast an early ballot because he was going to be in Washington D.C. on Election Day.

Cuomo agreed with a previous statement by Lemon that praised how Oprah would energize the get out the vote efforts for the Georgia Democratic gubernatorial candidate. “She did have something that I haven't seen from Democrats right now,” he added. “She was coming with equal passion. But not with equal animus.”

Lemon loved that apparent aspect of Winfrey’s speech at a Georgia town hall:

Well, I think it’s genius. It's a lesson, I think, in how one should conduct themselves all the time. But especially if you're in the political arena. The way she conducted herself today I thought was fantastic, right on. Come on, Oprah's a pro.

It’s humorous that Lemon would tout Oprah’s civility and independent politics (even though she has only come out in support of Democrats) when he has shown he follows neither.

This past June, Lemon got into a verbal fight with former Bernie Sanders campaign staffer Symone Sanders over who in the Democratic Party was responsible for giving us President Trump. He blamed the Bernie Bros:

Listen, I hear what you’re saying and I saw that on social media. And I got a lot of messages as well and pretty much everyone was in agreement. Not in what you said, the opposite way or the protest vote. And they were asking all the people who were screaming “Bernie, Bernie, Bernie” at the convention after Hillary Clinton got the nomination if they’re happy with themselves.

For someone who claims he didn’t align with a political party, he sure does take up most Democratic causes as his own. Take gun control for instance. He once declared that teachers who wanted to carry a gun in school were “nonsensical.” He also proclaimed that if you criticized the radical anti-gun Parkland students “you are the bad guy.” His ghoulish hyperbole is often off the rails, such as when he suggested America was “a country where anybody, at any time, could be shot to death…”

Civility was also something that wasn’t in Lemon’s wheelhouse. Just a couple days ago, Lemon drew tremendous criticism for claiming on-air that the “biggest terror threat” in America was “white men.” Back in August, he rationalized Antifa violence by suggesting they had a noble cause. Then there was the time he said all Trump supporters were “people who will lie, steal, and cheat, lie to their mother.”

Not very civil. Not very independent. This is CNN and Lemon is a perfect fit to work there.

CHRIS CUOMO: The governor's race in Georgia got some star power today. Oprah was out knocking on doors on behalf of Democrat Stacey Abrams. I'm laughing because imagine this woman when she knocks on the door and she expects somebody with a flyer and it's Oprah. She also took some shots at Trump in her speech. Take a listen.

OPRAH WINFREY: It's so much noise and crazy talk. All the vitriol in the ads. You know, they are designed to confuse and confound you with fear. They are not designed for people with discernment. Women, people, we have discernment.

CUOMO: So, what would be our would-be counter-puncher-in-chief have to say?

CUOMO: All right, he's gone kind of both ways. Remember when somebody was thinking she might run and all a sudden changed his tune a little bit. But now he’s back to being nice. Take it when you find it. Let’s bring in D. Lemon on this one. Oprah, is she the antidote?

DON LEMON: Let me challenge you on something. I don't really think she was talking about Trump, I think she stayed away from Trump on purpose. I think she's talking specifically about political ads and the current climate. If you want to some how --

LEMON: It did. I mean, it did but I watched the speech. I wasn't watching it, because I was dealing with some things, and everyone is texting me. Oh, my gosh, you watch Oprah, Oprah, Oprah. And you get a vote! And you get a vote! And you get a vote! I tell you what, Oprah would be the first one to tell you this. Oprah won't be the one who puts Stacey Abrams over the edge. It is the unknown people, especially those unknown women, many of them women of color who are fighting behind the scenes and knocking on doors that Oprah is motivating right now who are going to get Stacey Abrams elected if she wins come Tuesday night. I think … um.

I love the spirit of Oprah's speech today, who is an independent. She's sick of political parties like me. I’ve been an independent for a long time. Don't I own my own mind and my own vote, and don't tell me who to vote for. I vote -- by the way, I just voted. I did it, because we're going to be Tuesday night in D.C. I sent in my ballot yesterday.

Anyway, I think Oprah can help, but it's going to be the people behind the scenes who actually -- those people who are working --

CUOMO: I think that's very true. At the end of the day it’s, can somebody spark what is in your head and heart? And make you act or make yourself want to act? She did have something that I haven't seen from Democrats right now. I don't care what she was talking about, how she was couching it, whether she was playing it aggressive or safe. She was coming with equal passion. But not with equal animus.

LEMON: Well, I think it’s genius. It's a lesson, I think, in how one should conduct themselves all the time. But especially if you're in the political arena. The way she conducted herself today I thought was fantastic, right on. Come on, Oprah's a pro.

LEMON: She knows how to handle herself. What I liked about it was that she said, nobody called me to come here. I called her, I sought her out. Which I thought spoke volumes for about the kind of person she thinks Stacey Abrams is.