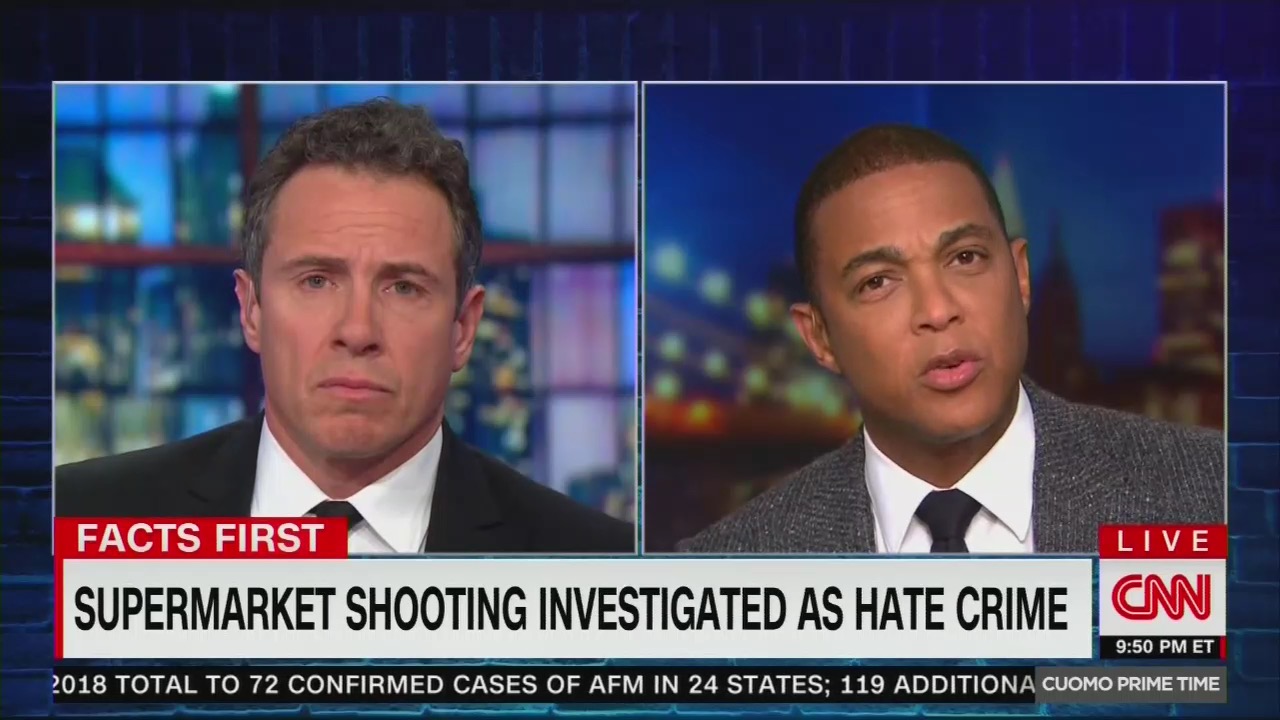 The true threat to this country’s stability is not one ethnicity or people group, CNN host Don Lemon lectured at the end of Chris Cuomo’s show Monday night, before contradicting himself by stating that white conservative men are actually the biggest terror threat America faces.

Lemon made that statement as Cuomo was signing off his primetime show October 29, as the pair complained about Trump’s rhetoric on illegal immigration. The liberal journalists, taking a note from their peers, tied it to the recent horrific murders at a Pittsburgh synagogue and a Kroger grocery store (because of course somehow everything is Trump’s fault):

CHRIS CUOMO: It's not just Pittsburgh. It's not just the bomber. There was another hate filled criminal just last week in Kentucky. Another white man, history of violence, custody for shooting and killing two African Americans at Kroger's. He tried to barge into a predominantly black church and failed and he chose a second target. We barely have time to cover it because we were distracted by another extremist that was was doing bad things.

DON LEMON: Yeah. And then now another one. You all of them in a row. We messaged a little about this this weekend.

That’s when Lemon absurdly scolded Trump and the country for “demonizing” Muslims and illegal aliens, adding that we needed to “realize the biggest terror threat in this country” is white men radicalized by the right, and suggested maybe there should be a “ban” on “white guys:”

I keep trying to point out to people not to demonize any one group or any one ethnicity but we keep thinking that the biggest terror threat is something else. Some people who are marching -- you know -- towards the border like it's imminent. And when the last time they did this, a couple of hundred people came and they -- you know -- most of them didn't into the country. Most of them tired, you know got tuckered out before they even made it to the border. So we have to stop demonizing people and realize the biggest terror threat in this country is white men, most of them radicalized to the right, and we have to start doing something about them. There is no travel ban on them. There is no ban on -- you know, they had the Muslim ban. There is no white guy ban. So what do we do about that?

It's worth noting that, according to Lemon's own words, he's living quite a dangerous life considering he's dating a white man. Oops.