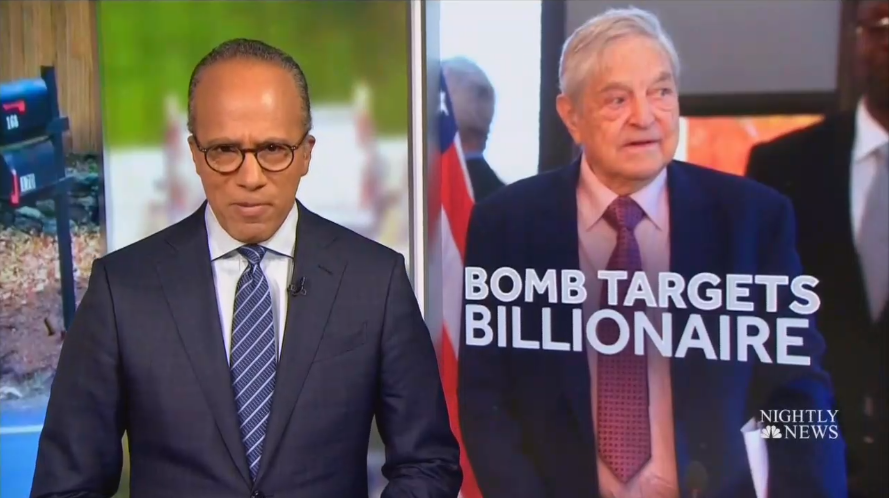 Federal investigators are looking into who left a pipe bomb in the mailbox of shady liberal billionaire George Soros’ New York mansion Tuesday. In the wake of the bomb attack, the liberal broadcast networks (ABC, CBS, NBC, and Spanish-language networks Telemundo and Univision) rushed to cover the attack and parrot Soros’ condemnation of the “politics of hate.” But their concern for Soros came after all of them had ignored violent assaults and threat against conservative candidates and lawmakers.

Sensationalist anchor David Muir kicked off the report during ABC’s World News Tonight by seemingly pinning the blame for the attack on President Trump. “[T]he FBI on the scene north of New York City after a live bomb was left in the mailbox of a philanthropist who funds Democratic causes and is a frequent target of criticism from the President,” he declared.

“As they hunt for a suspect, federal investigators are reviewing surveillance video to figure out who dropped that package. Soros, who donates to liberal causes, has been a target of conservatives,” echoed ABC reporter Erielle Reshef. To feign objectivity, she also noted people shouting at Senate Majority Leader Mitch McConnell and House Minority Leader Nancy Pelosi.

CBS anchor Jeff Glor only dedicated a news brief to the bomb attack during the CBS Evening News. “Soros, who is 88, was not at home. He has spent large amounts of money supporting Democrats and progressive causes, which has made him a target of criticism from by many right-wing groups,” he said.

“George Soros, who frequently donates to Democrat candidates and causes and often the target of conspiracy theories, including in recent days about that migrant caravan,” decried anchor Lester Holt during NBC Nightly News.

NBC reporter Ron Allen touted Soros’ statements decrying the “politics of hate” and “his foundation urging ‘politicians across the political spectrum to tone down their rhetoric. Words have consequences.’” Allen did note that House Majority leader Kevin McCarthy had a rock thrown through his office window.

While ABC and NBC briefly touched on two cases of conservatives being targeted, there were a plethora of cases they flat out ignored. They ignored a knife attack against GOP congressional candidate Rudy Peters (who's challenging Democrat incumbent Eric Swalwell in California), along with a mass shooting threat against meetup of Trump supporters at the Trump International Hotel in DC.

As the Fox News Channel reported last Thursday, there had been a noticeable upsurge in physical assaults and threats against conservative candidates and lawmakers. Most of which, the liberal broadcast networks had hidden from their viewers. 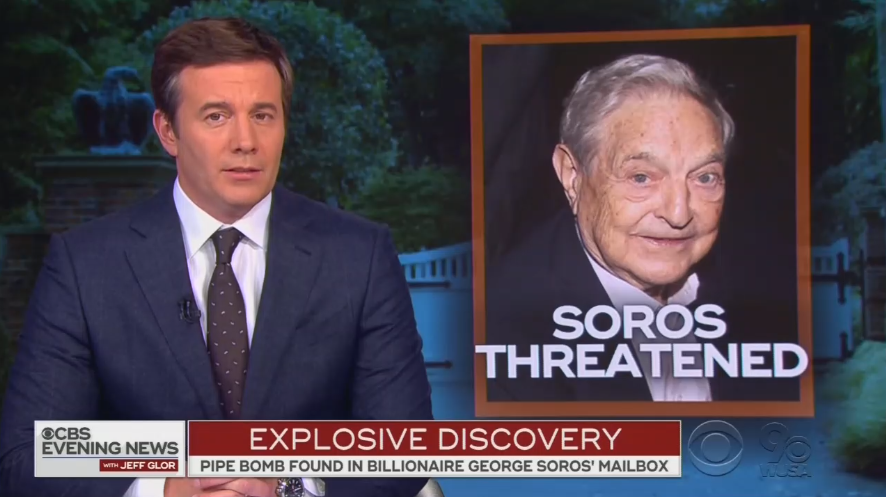 Among those blacked out cases was a Minnesota candidate who was knocked out from a sucker punch to the head and “a Democratic operative for a group funded by George Soros” who was arrested for “allegedly assaulting the female campaign manager of the GOP candidate.” Meawnwhile, a GOP candidate in Vermont got a letter warning her she was being hunted by Socialists.

The networks also turned a blind eye when two-time failed presidential candidate Hillary Clinton called for greater incivility and Obama-era Attorney General Eric Holder called of the GOP to be kicked. And they ignored the suspicious letter that was sent to the home of Maine Senator Susan Collins following her vote to confirm Justice Brett Kavanaugh.

While the media were faithfully echoing Soros’ condemnation of “hate,” they ignored his financing of radical leftist organizations. In October of last year, Soros shifted $18 billion to his radical Open Society Foundation that funneled money to many far-left organizations.

According to then-MRC Business writer Aly Nielsen: “Partner organizations for the anti-Trump Women’s March in January 2017 had also received $246 million from Soros between 2000 and 2014.” And during the first Women’s March, the world witnessed singer Madonna proclaim she wanted to blow up the White House.

The liberal broadcast networks sympathized with Soros but don’t share the same concern for those on the other side of the aisle.

DAVID MUIR: Meantime, the FBI on the scene north of New York City after a live bomb was left in the mailbox of a philanthropist who funds Democratic causes and is a frequent target of criticism from the President. ABC's Erielle Reshef on the scene tonight.

ERIELLE RESHEF: Tonight, the FBI investigating that bomb found in the New York mailbox of billionaire liberal philanthropist George Soros. A senior law enforcement official describing the device as “no hoax”, similar to a pipe bomb. A security guard finding a suspicious package late Monday, then taking it to a wooded area. The ATF then safely detonating it. As they hunt for a suspect, federal investigators are reviewing surveillance video to figure out who dropped that package. Soros, who donates to liberal causes, has been a target of conservatives.

DONALD TRUMP: They'll go to a person holding a seen, who gets paid by Soros or somebody, right? That's what happens.

RESHEF: While authorities are still trying to pin down a motive, investigators say that mailbox bomb is alarming, amid a backdrop of increasingly hostile political rhetoric. Just least week, this TMZ video showing Senate Majority Leader Mitch McConnell getting yelled at by angry diners.

RESHEF: They shout expletives at her as she exits through a door. And David, Soros' foundation is not directly addressing this incident, but is saying the hateful rhetoric dominating politics both in the U.S. and abroad is breeding extremism. David?

JEFF GLOR: Tonight, the FBI is searching for the person who hand-delivered a pipe bomb to the home of billionaire financier George Soros. It was placed in the home's mailbox in Katonah, New York, and found by an employee. The six-inch-long bomb was loaded with explosive black powder. It was later detonated by authorities. Soros, who is 88, was not at home. He has spent large amounts of money supporting Democrats and progressive causes, which has made him a target of criticism from by many right-wing groups.

LESTER HOLT: Tonight, authorities in New York are investigating who put a bomb in the mailbox of a billionaire philanthropist. George Soros, who frequently donates to Democrat candidates and causes and often the target of conspiracy theories, including in recent days about that migrant caravan. NBC's Ron Allen has details.

RON ALLEN: Tonight, billionaire philanthropist George Soros blaming what he calls the “politics of hate” for the bomb planted at his New York estate. Soros, a financial backer of progressive causes, was not home when investigators found an explosive they say was packed with powder.

ALLEN: An employee here at the residence found the device in one of the mailboxes alongside the road, became suspicious, took it out to the nearby woods, and called police. Soros, the target of a false conspiracy theory by a conservative Florida congressman, with this video, for supposedly paying migrants to join the caravan. In a statement, his foundation urging “politicians across the political spectrum to tone down their rhetoric. Words have consequences.”

UNIDENTIFIED WOMAN 1: For this to happen in my own neighborhood is a frightening thing.

UNIDENTIFIED WOMAN 2: If it is political, then hey, we're in a crazy world.

ALLEN: Investigators saying they don't have a motive. But Soros saying he has no doubt why he was targeted. Ron Allen, NBC News, Bedford, New York.