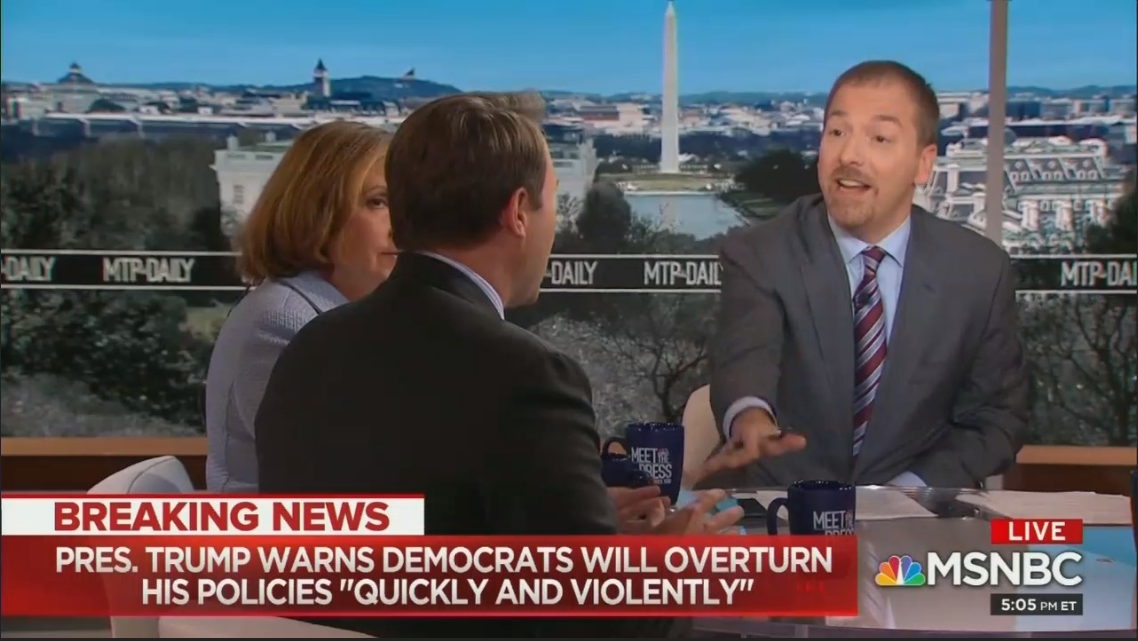 Just when you thought MSNBC host Chuck Todd could get any more ridiculous, he sets a new gold standard for himself. If you were to believe Todd’s ramblings during Tuesday’s MTP Daily, you would think President Trump “just wants to rationalize violence” after he warned a group of evangelical leaders about Antifa’s terrorist-like actions. But in reality, it was Todd who was the one rationalizing violence.

“If it's Tuesday, President Trump is warning there will be violence if Republicans lose the midterms,” he bitterly declared as he started the show. Todd processed to opine about how America was at a critical tipping point, but all the President could do was “fear monger”.

“All of this at a moment that it feels as if the future of just the entire presidency, the country, the Republican party, the democratic party, all of it is near an inflection point depending on what voters want. And the President is apparently trying to scare voters into wanting to support the GOP,” he huffed.

Todd bizarrely took issue with Trump noting that “[w]hen you look at Antifa and look at some of these groups, these are violent people.” During the panel discussion, he asserted that Trump was “trafficking” in the crazed “conspiracies” of “Trump voters” and claimed Antifa was only “an issue in Portland, Oregon” and “some places else.” “I think he just wants to rationalize violence,” he exclaimed.

This was a jaw-dropping level of unadulterated hypocrisy from the self-proclaimed political referee. It was just a year ago that Todd allowed pro-Antifa Dartmouth University Lecturer Mark Bray onto MTP Daily to preach the virtues of their violent ways of curtailing the free speech of their political opponents.

“Mark Bray, you are writing this book Antifa, the Anti-Fascist Handbook. Explain this movement and its roots,” he beckoned his guest. As I pointed out back then: “Chuck Todd never questioned his guest’s romanticized explanation about what Antifa stood for or their own anti-Semitic streak. He failed to do his due diligence and mention that Antifa promoted communism, a bloody ideology responsible for the deaths of roughly 100 million people.”

Just four days later, Todd allowed Bray to sully the set of NBC’s Meet the Press where he again allowed him to defend Antifa’s violence. As I again noted at the time, “When describing what Antifa was, Todd downplayed the group’s radicalness by simply saying they were ‘a far-left political movement that argues it's necessary to confront hate groups sometimes with force.’” Todd let Bray get away with suggesting what they were doing was some kind of twisted version of “self-defense”.

Even though Bray appeared twice on his shows, Todd never informed viewers that his guest’s promotion of violence was condemned by Dartmouth University.

Since Todd was suggesting that Trump was manufacturing Antifa’s violence, he should try telling that to his NBC colleague Cal Perry who, along with his crew, was assault by the group in Charlottesville, Virginia this summer (a long way away from Portland). In fact, NBC actually refused to report on the attack the morning after it happened.

And it wasn’t just Todd making such hyperbolic accusations about Trump’s reason for invoking Antifa. During the first hour of CNN’s The Situation Room, network analyst and former NSA attorney Susan Hennessey argued that “you have to wonder whether or not these are not the kinds of comments that actually incite violence.”

In the second hour of the same show, legal analyst Jeffrey Toobin claimed it was just another example of Trump’s racism shining through. “Theme is, ‘I'm Donald Trump and I'll protect you from the scary black people.’ Antifa is widely perceived as an African-American organization,” he claimed with absolutely no evidence.

CHUCK TODD: If it's Tuesday, President Trump is warning there will be violence if Republicans lose the midterms.

Well good evening, I'm Chuck Todd here in Washington. Welcome to MTP Daily. If it’s Tuesday, it’s the last major primary election night before the midterms -- sorry, Cynthia Nixon. And the President of the United States is fear mongering claiming there will be violence if the Republicans lose the majority. No, you didn't hear that wrong. Folks, we've said it before and we'll see it again -- in this environment, you can forget that old saying that all politics is local. Because this midterm, all politics is national and then some.

All of this at a moment that it feels as if the future of just the entire presidency, the country, the Republican party, the democratic party, all of it is near an inflection point depending on what voters want. And the President is apparently trying to scare voters into wanting to support the GOP.

Here's what the President said in a closed-door meeting with evangelical leaders last night. This is according to recorded excerpts that we at NBC News have reviewed. The president warned that if the GOP loses the midterms, quote, “they will overturn everything that we've done, and they'll do it quickly and violently. And violently,” he repeated. “There's violence,” he said again. “When you look at Antifa and look at some of these groups, these are violent people.” We'll have a little more in a second.

TODD: The Trump voters. He's trafficking in their conspiracies. Antifa, an issue in Portland, Oregon. I will grant you that. And is some places else. But this is not a giant issue.

STEEL: This reminds me of his reaction, initial reaction, to Charlottesville. This desire to talk about violence on the left as somehow equal to or perhaps greater than violence on the right when there is no evidence for that.

TODD: Or to rationalize violence!

TODD: I think he just wants to rationalize violence.