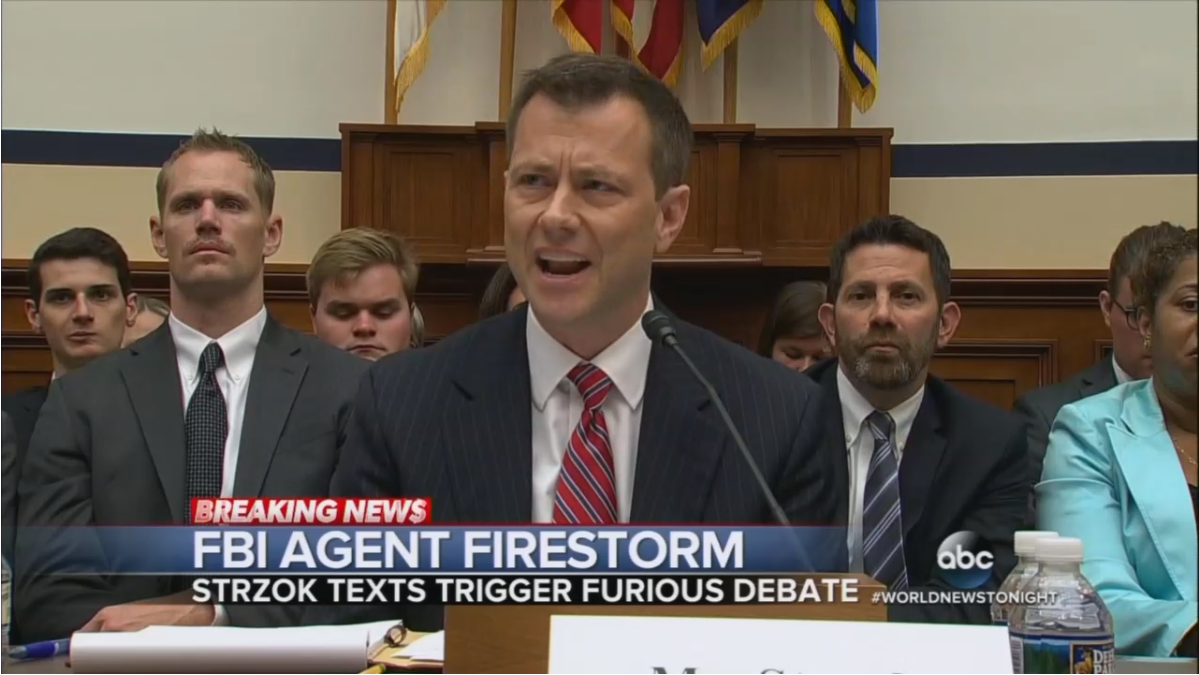 Sparks flew on Capitol Hill Thursday as House Republicans grilled anti-Trump FBI agent Peter Strzok about his bias and its possible influence on the high-profile investigations of Hilary Clinton and President Donald Trump. The hearing was basically a zoo between Democratic outbursts, Strzok’s righteous indignation, and Republicans holding them back. Of course, liberal media outlets like ABC rushed to Strzok’s defense.

Sensationalist anchor David Muir kicked off World News Tonight by lamenting “the state of politics today” and complained the hearing was “uncomfortable to watch.” “As an FBI agent tried to defend himself and his text messages about then-candidate Donald Trump, some lawmakers were not having it,” he sighed. Muir touted how Strzok was finally “breaking his silence” after months of being “the lightning rod for criticism of the FBI and allegations of bias within…”

The report was handed over to chief Justice correspondent Pierre Thomas, who immediately opined about how “[e]mbattled FBI agent Peter Strzok, under fire for months, tonight, coming to Capitol Hill to try and clear his name.”

Despite admitting that Strzok had a deep animus for President Trump, Thomas boosted his testimonial defense. “In today's explosive hearing, Strzok defiant, accusing lawmakers of playing right into Russia's hands,” he hyped. “He accused Republicans of twisting his words.” Thomas also suggested Republicans seized on a text message he sent talking about they were going to stop a Trump presidency from happening, effectively downplaying the seriousness.

Thomas bought into Strzok’s claim that the text was “triggered by Trump's attack on the Muslim parents of a fallen American soldier.” He then boasted about how Strzok “mounted a searing defense, not of just himself, but of the FBI.”

After noting Democrats were eager to “object” during the “raucous” hearing and although he never pinned the chaos on them, Thomas pushed liberal assertions that Republicans were only out to damage the special counsel’s Russia investigation since it was looking to possible collusion into the Trump campaign. “But Republicans, relentless,” he huffed.

As they were wrapping up the segment, ABC twisted the results of a Justice Department Inspector General report into such accusations of political bias.

“But just to be clear, Pierre, you've reported on this before, the Justice Department did an investigation, its own independent Inspector General already issuing a report on this, long before this heated hearing,” wondered Muir. To which, Thomas responded:

That's right, David. The Inspector General criticized Strzok about the nasty e-mails about Trump, but ultimately concluded that, quote, “he did not find documentary or testimonial evidence that improper considerations, included political bias, directly affected the specific investigative decisions we reviewed.” End quote.

But that’s not entirely accurate. The “specific investigative decisions” that the IG reviewed were those related to the Hillary Clinton e-mail investigation. ABC clearly tried to conflate that investigation with the Russia probe.