With the stroke of a pen, President Trump signed an executive order on Wednesday that would officially end the policy of separating parents and children who come across the southern border illegally. It’s what many on the right and left wanted to see happen, but for the liberal media it wasn’t enough, as CBS anchor Jeff Glor demonstrated by opining about how Trump was trying to “put out a big political fire with a few drops of ink.”

The liberal broadcast networks of ABC, CBS, and NBC dedicated another 89 minutes of airtime to the issue on Wednesday alone. Since they first began running stories on the topic, their combined airtime added up to a whopping 347 minutes or over five hours. NBC hung on to first place with 143 minutes, CBS had 126 minutes, and ABC lagged behind with 78 minutes. Both ABC and NBC have seen exponential expansions in coverage since Monday. 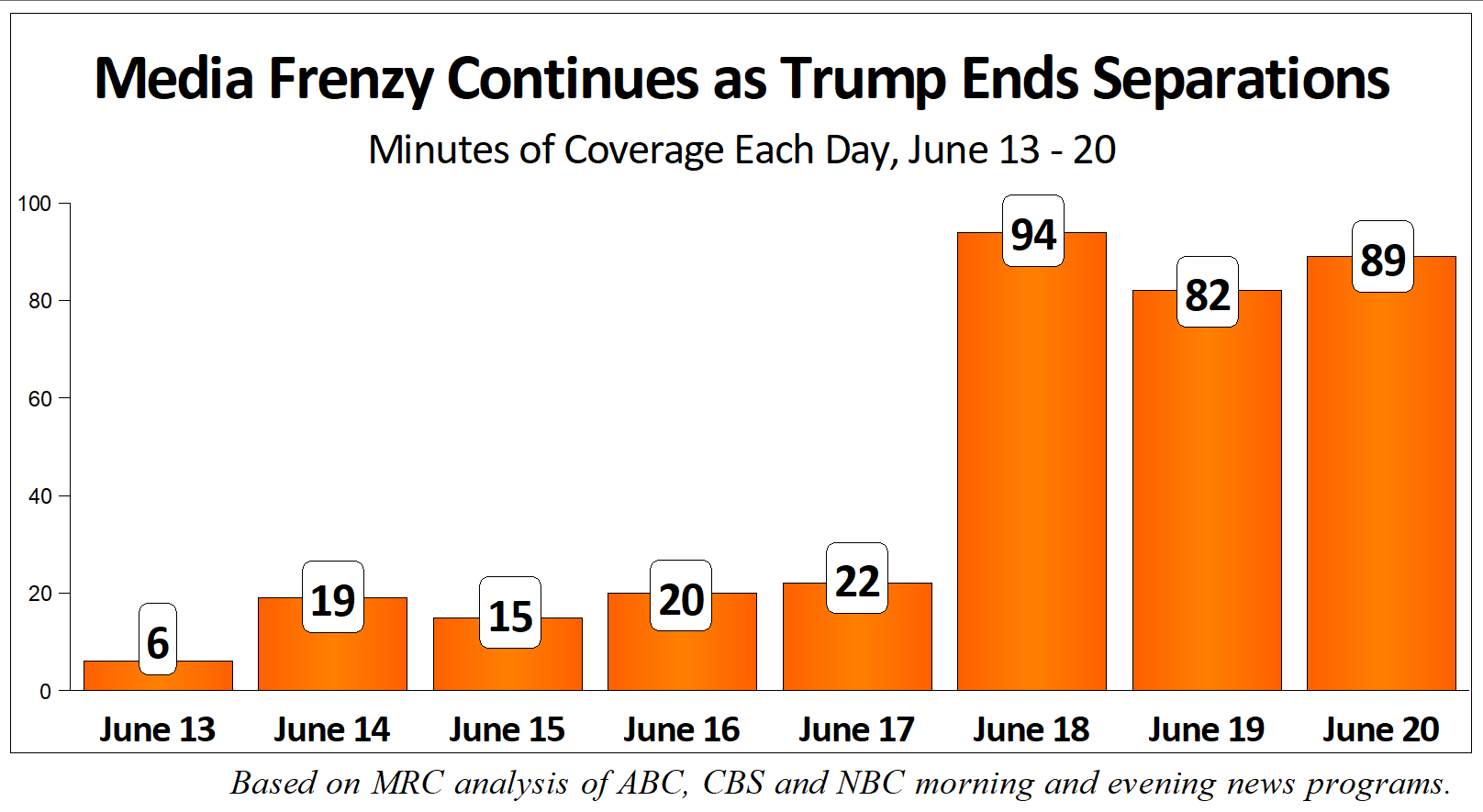 Despite the President’s commitment to reuniting families, the networks were deeply skeptical about how the process would work out. For the last week, the liberal media were concerned about the Trump administration separating kids while their parents were being detained. But now that the kids would be allowed to stay with their families, the networks were huffing and puffing about kids being in jail.

“Frankly we do not know how long these families will be detained together. What we do know is that children that were held alone in facilities like this will now be housed with their parents. Historically the length of those family detentions could be up to 20 days long,” said NBC reporter Jacob Soboroff during NBC Nightly News.

“President Trump says the zero-tolerance policy is still in effect tonight, but children and parents who enter the country illegally will be detained together, according to his executive order, as their cases are reviewed,” prefaced anchor David Muir on ABC’s World News Tonight. “But that leads to new questions. Among them, how long can the Trump administration detain entire families?”

For days, the Trump administration was telling the press that they were legally barred from detaining kids and their parents together, and every step of the way, the liberal media was claiming that was a big fat lie. But during their report on Wednesday, CBS Evening News suddenly stumbled across the law in question.

Despite how they got what they wanted and how it was limited by the law, CBS still wasn’t happy. “Today's executive order is not a permanent solution,” Garrett huffed. “It allows families to be held together for 20 days. After that, they must either be deported or separated.” He then admitted that Congress still needed to pass a law and that the executive order was going to face a court battle, which was what the administration had been telling them (the media also called this a lie).

Despite their combined 28 minutes of coverage Wednesday evening, only CBS reported an official warning given to ICE agents following online threats against them. Also, none of them mentioned the vile and hate-filled tweets from an unhinged Peter Fonda who targeted the Trump family and others, which stemmed from the policy. And while ABC hyped DHS Secretary Kirstjen Nielsen getting harassed by protestors, the network failed to mention they were with the Democratic Socialists of America.

Thanks to NewsBusters’ Kyle Drennen, Scott Whitlock, Kristine Marsh, Geoffrey Dickens, and Bill D’Agostino for contributing to this study.