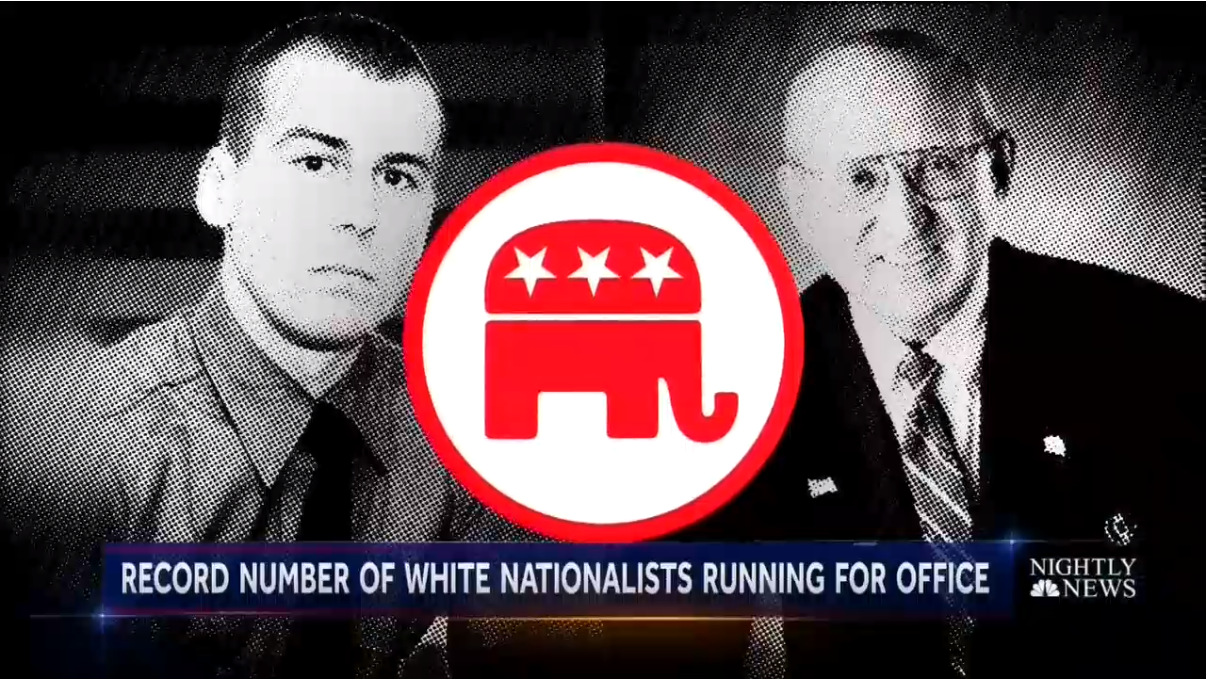 UPDATE, 3:05 PM ET: NBC News decided to air another full report (over three minutes long) on Friday’s Today show about the same white nationalist candidates. Fill-in co-host Willie Geist breathlessly proclaimed: “Let’s begin this half hour with an unsettling trend in the run-up to the 2018 midterm elections. More white nationalists than ever are running for office.” Radford appeared on the morning show and warned: “White nationalists coming out publicly, espousing their views, and running for national office in historic numbers. But the question this morning is, why do they feel emboldened now?”

During the segment, Raford featured a soundbite from anti-Trump Republican strategist Rob Stutzman, who blamed the President for the fringe candidates: “Well, I think we have a tone that has been set during the campaign and the presidency of Donald Trump that some would say creates a – has sent a dog whistle, a signal to these types of groups and individuals.” The reporter later emphasized that “the candidates’ supporters say this is exactly what they think will make America great again.”

First, the liberal media were touting the so-called “blue wave” that was supposedly going to drain the swamp of Republicans in November. But Thursday afternoon on MSNBC and later on NBC Nightly News, they were freaked out by a so-called “surge” of Nazi Republicans that were on the ballot in the 2018 midterms. Despite the fact they were fringe people with little to no chance of winning their general elections, reporter Morgan Radford relied on the Southern Poverty Law Center’s estimation that there were an imposing eight candidates across the country.

The fear-mongering report was given further unnecessary credibility by airing in the program’s A-block. “Now to a disturbing trend as we approach the 2018 midterms,” fill-in anchor Savannah Guthrie warned. “The surge in candidates running for office with white nationalist messages. At least eight have been identified by an organization that monitors hate groups. That's more than any election in modern history.”

The statics were published by the dubious and anti-conservative Southern Poverty Law Center. Given their history of labeling many conservative organizations as “hate groups” it may only be a matter of time before they just go ahead and label the entire GOP field as white nationalists.

Radford elevated two of them despite the fact there was not a chance for either of them to win. The first one she highlighted was running in Chicago and was advocating to make neighborhoods 90 percent white. This person “was a member of the American Nazi Party, who denies the Holocaust ever happened,” she noted. He also suggested some pretty racist things about where Radford got her intelligence from.

The NBC reporter noted that the man had received 20,000 votes in the GOP primary before mentioning that he was the only one running. “Anti-hate groups say the number of white nationalist running for office this year is higher than ever before,” she added. Any political scientist will tell you that people tend to just vote for whosever is on the party line they identify with regardless of what they know or don’t know about them.

The idea that the SPLC is an “anti-hate” group was despicable considering their publication inspired a gunman to assault the Family Research Council back in 2012.

The second racist Radford interviewed was in California and running against incumbent Senator Dianne Feinstein (D). She played a clip of him talking about how Trump was speaking to him through ‘dog whistles’ about hating Jews, despite the fact Trump’s daughter and son-in-law are Jewish.

Radford didn’t get around to mention how both national and state and Republican organizations wanted nothing to do with those fringe candidates until close to the end of her report. “This should be a wakeup call. If these types of candidates are going to come out from under the rug, they need to be repudiated at the ballot box,” California-based GOP strategist Rob Stutzman told her.

“But their supporters say they are not going anywhere,” Radford declared as she played a clip of one of them shouting on a street corner to no crowd while two others held up a banner.

This report was a pathetic attempt to fear monger and sully the rest of the good Republican Party candidates going into the midterms. This comes after NBC praised the recent primary victories for Democratic candidates across the country while overlooking their more radical elements.

SAVANNAH GUTHRIE: Now to a disturbing trend as we approach the 2018 midterms. The surge in candidates running for office with white nationalist messages. At least eight have been identified by an organization that monitors hate groups. That's more than any election in modern history. Morgan Radford traveled across the country to talk with some of these candidates about why they believe they can win on a platform of prejudice.

MORGAN RADFORD: Arthur Jones is running for Congress in Chicago's third district. Do you think you have a shot at winning?

ARTHUR JONES: Listen, I wouldn't be in this if I didn't think I could win.

RADFORD: He's one of at least eight white nationalists running for state or federal office this year according to the Southern Poverty Law Center.

JONES: I consider myself a white racialist.

RADFORD: Jones was a member of the American Nazi Party, who denies the Holocaust ever happened.

JONES: I think most white people want a white neighborhood.

RADFORD: Do you think a black person is genetically inferior?

JONES: The average IQ of a black person is about 20 points lower than a white person.

RADFORD: I went to Harvard.

JONES: Alright, you got a lot of white blood in you, too.

JONES: Well, that's where your intelligence is coming from, I think.

RADFORD: You think it comes from my white side?

JONES: I think so.

RADFORD: 20,000 people voted for Jones in the March primary, he ran uncontested and now he'll be on the Republican ticket in November. Anti-hate groups say the number of white nationalist running for office this year is higher than ever before including candidates like Patrick Little.

PATRICK LITTLE: This monstrous nature of the Jewish people must be known to the public.

RADFORD: You think Jews are monsters?

LITTLE: As a group, they are definitely behaving as a monster, 100 percent.

RADFORD: Little is running against Dianne Feinstein in California and blames Jews for America's problems.

RADFORD: He claims President Trump is speaking to people like him.

LITTLE: He dog whistled about globalist. I didn't understand he was talking about Jews until after the election.

RADFORD: But the state and national Republican Party say they want nothing to do with him or Jones.

ROB STUTZMAN: This should be a wakeup call. If these types of candidates are going to come out from under the rug, they need to be repudiated at the ballot box.

RADFORD: But their supporters say they are not going anywhere.

ELI JAMES (Arthur Jones Supporter): It's not because we're a racist, it's because we feel marginalized and we're the ones who are being oppressed.

RADFORD: Now they are gearing up for a battle on the ballot. Morgan Radford, NBC News.