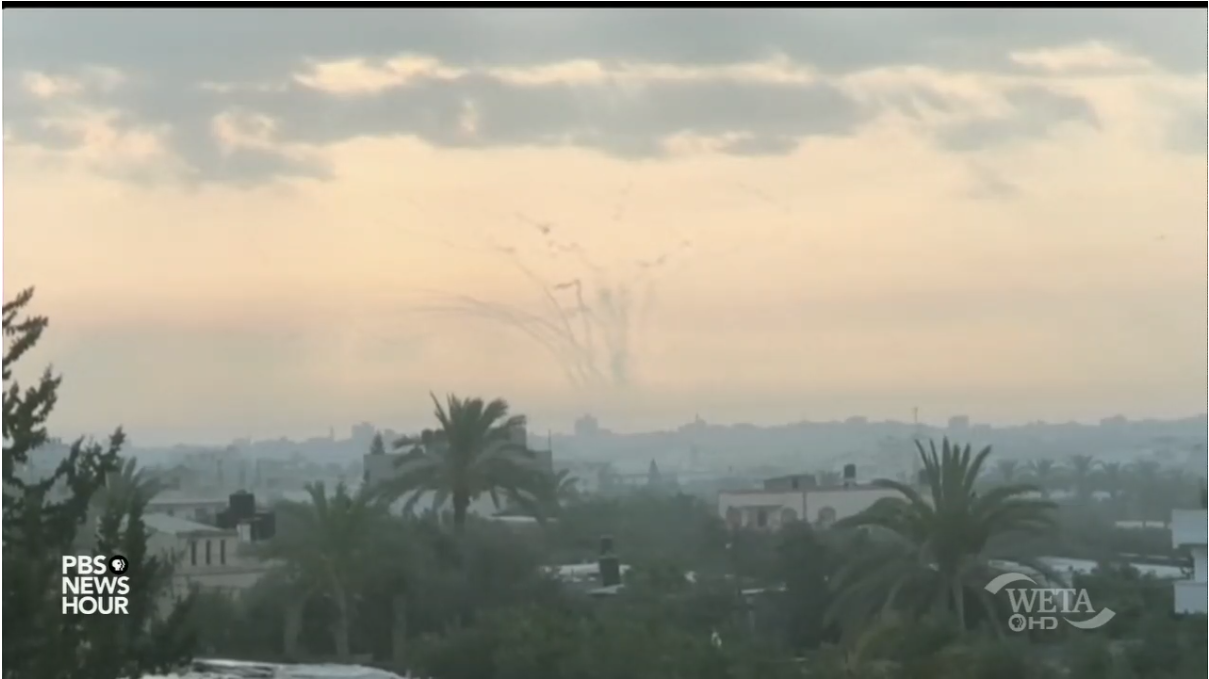 For hours on end, Israeli civilian centers saw well over 100 ballistic projectiles launched from the Gaza Strip rain down into their communities Tuesday (and the wee hours of Wednesday morning). The attacks constituted the largest assault on Israel by the terrorist organization Hamas since the start of the 2014 war. But if you were getting your news from American broadcast networks (ABC, CBS, and NBC) you probably wouldn’t know it was going on, since none of them reported it during their morning or evening shows.

According to The Times of Isreal and Haaretz respectively, Israeli civilians were subject to “over 70 rockets” and an initial “barrage” of “28 mortars” Tuesday alone. Lucky, most of the projectiles, including the mortars, were intercepted by the marvelous Iron Dome defense system. During the conflict, Israel’s Air Force had carried out some 30 airstrikes on Hamas targets in Gaza and five members of the Israel Defense Force were wounded by shrapnel from one of the mortars.

The dead silence from the liberal network news outlets comes after the three spent days siding with Hamas and condemning Israel for defending itself from their assault on the border. The networks actually mourned for the dead and for the “catastrophe” that was the existence of the Jewish state. Hamas’s coordinated effort was put into motion on the day the U.S. opening its embassy in Israel’s capital. And when Hamas admitted that 50 of the 62 killed were theirs, the networks didn’t say a word.

The networks bought into concocted Palestinian propaganda hook, line, and sinker. “In Gaza, two protesters were killed today, but it was more a day of grieving for the 60 killed here yesterday. A baby suffocated by tear gas laid to rest,” ABC chief foreign correspondent Terry Moran said at the time.

But on Tuesday, there was no mention of how a Palestinian mortar had landed in the playground of an Israeli kindergarten shortly before it was set to open for the day. It later was discovered that the dead baby Moran had smeared Israel with had died of a preexisting and unrelated condition.

The United States had also called an emergency meeting of the U.N. Security Council to discuss the matter, but that too didn’t cause a blip on their radar.

In addition to ignoring the terror attacks by Hamas, CBS and NBC skipped over another attack by an Islamic extremist in Belgium Tuesday. For what it’s worth, ABC’s World News Tonight actually gave that attack a full report.

“A gruesome and deadly attack today on two female police officers, both of them mothers, stabbed and then shot to death with their own weapons. It happened in Belgium. The attack ending when other officers then gunned the assailant down,” announced anchor David Muir.

According to the report by ABC’s James Longman, the daytime attack claimed the lives of two mothers and a young man who was in his car. “He then went into this school, holding a woman hostage, before rushing at police outside. The gunman injured four pic officers before they brought him down,” he added. He also noted the attacker had shouted “Allahu akbar.”

As has become common with such instances of terrorism, the man was homegrown and known to authorities. Further, the attacker was recently released on leave from the prison where he was believed to have been radicalized.

The combination of these liberal outlets siding with Hamas, ignoring their deliberate targeting of innocent civilians, and the omission of another terrorist attack marks a dark day for foreign policy journalism in America.

The transcript of ABC's Belgium terror attack report is below, click "expand" to read:

DAVID MUIR: Now, to the terror attack overseas tonight. A gruesome and deadly attack today on two female police officers, both of them mothers, stabbed and then shot to death with their own weapons. It happened in Belgium. The attack ending when other officers then gunned the assailant down. Well tonight here, images of the takedown, and word the suspect had just been let out for a two-day leave from prison. ABC's James Longman is on the scene for us.

JAMES LONGMAN: Watch as police approach a gunman holed up inside, and then, the volley of bullets. Cutting him down in broad daylight. Tonight, Belgium reeling from another suspected terror attack. At 10:30 local time in the city of Liege, a man armed with a knife stabbed two policewomen from behind. Both were mothers, one with 13-year-old twin daughters. The suspect is alleged to have shouted "Allahu akbar," God is great, as he attacked them. Stealing their guns, he shot them both dead.

He left the two bodies there on the sidewalk before making his way up this street. He was firing at random with the guns he had stolen before killing a 22-year-old man in a nearby car. He then went into this school, holding a woman hostage, before rushing at police outside. The gunman injured four pic officers before they brought him down.

The suspect is reported to be 36-year-old Benjamin Herman, a Belgian native. Police say he was on two-day prison leave and was to return to prison today.

MUIR: And James Longman with us from Belgium tonight. And James, Belgian authorities do believe the suspect may have been radicalized while in prison?

LONGMAN: That's right, David. He was flagged last year for his connections to known extremists inside prison. Belgium has been home to those linked to some of Europe's most deadly attacks. David?

MUIR: James Longman on the scene for us. James, thank you.