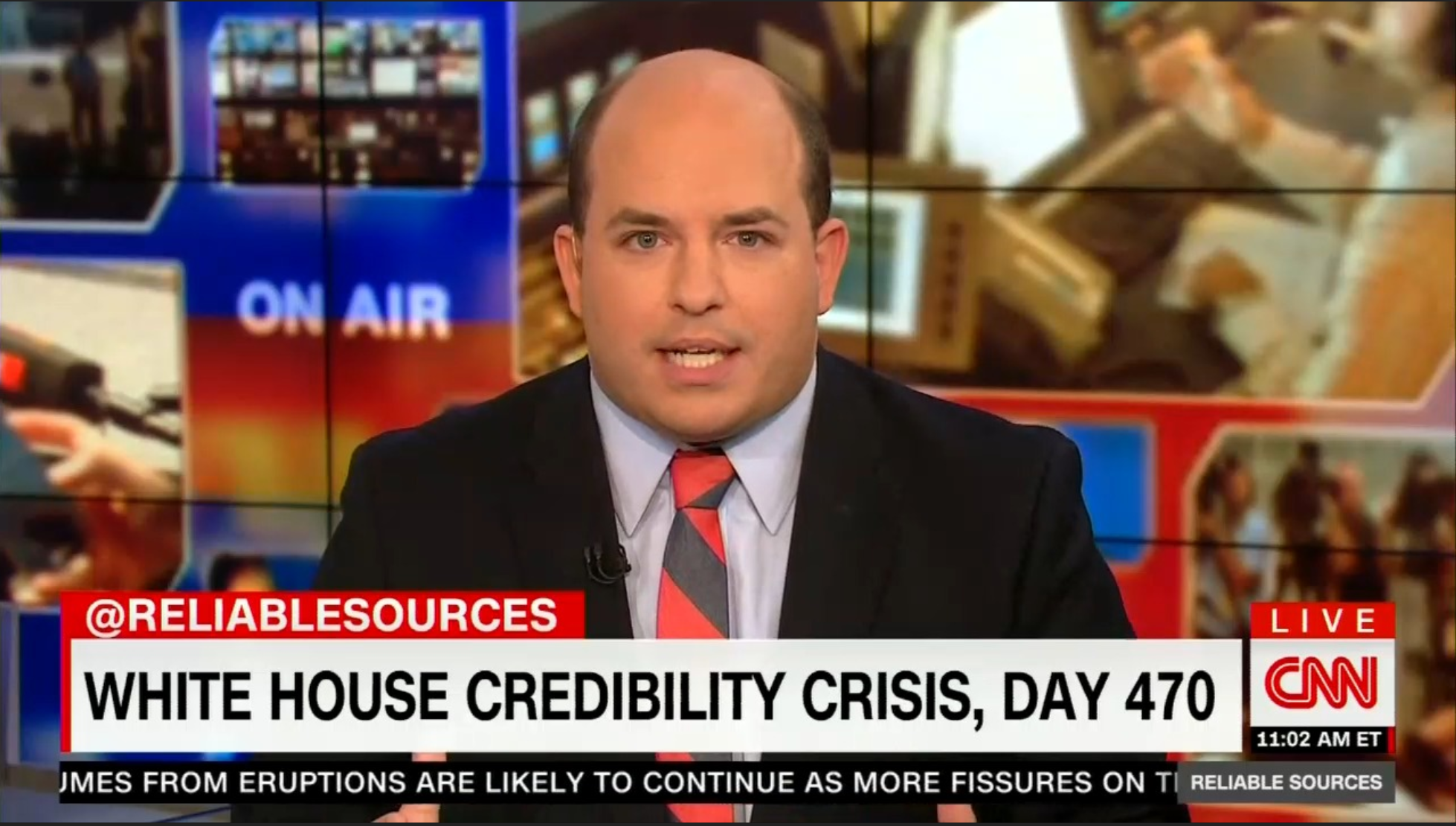 It’s well known that CNN senior media reporter Brian Stelter is no fan of President Trump. He even goes as far as to question’s the President’s mental stability and was overjoyed when the rest of the media were pushing their hot takes too. During Sunday’s Reliable Sources, he opined about how the White House was in day 470 of what he called a “credibility crisis.” And despite how the show is supposed to be about the media, Stelter dismissed the notion media was having their own crisis after their “no good, very bad week.”

After highlighting what would be discussed to the show, Stelter transitioned from talking about the 10 journalists killed in Afghanistan last week to slam the administration. “But first, back here in the U.S., enough is enough. The lies, the deceit, the fear mongering. Journalists increasingly are feeling empowered to call out the Trump White House's lies,” he boasted.

“The Trump presidency, this is what a crisis of leadership looks and feels like. Every week another scandal. Every week another cover-up,” Stelter declared as he started talking about the embarrassing situation with Rudy Giuliani. “This week I have to admit I chuckled at some of the banners on screen—some of the headlines calling this a White House credibility crisis. I mean, that is true. That's objectively true. It is a crisis, but it's been true since day one.”

Stelter then turned to Trump’s former doctor, Harold Bornstein who wrote the rather flattering letter about the President’s health during the campaign. The CNN reporter pointed to claims by Bornstein that his office was “raided” by the Trump team after the election and that Trump wrote the letter himself. “Trump dictated that whole letter. I didn't write that letter. I just made it up as I went along,” Stelter read from the statement, failing to point out that that statement contradicts itself or how the doctor ridiculously said he felt like he was “raped.”

A short time later, and after he brought on Carl Bernstein to hyperventilate about a “cold civil war,” Stelter accused Fox News of helping to defend the President from his lack of credibility but turning it on the media. “Later in the week, all week long, coverage of the President's lack of credibility, calling it a crisis, and then on Saturday where did Fox go? You guessed it. The media has a credibility crisis.” In order for Stelter to make that case, he had to pretend that Fox’s point was made in a vacuum with only the White House applying a force. But in reality, last week was a miserable one for the media and its credibility.

The week began with the fallout from the horrendous White House Correspondents Dinner that epitomized the media’s hostile relationship with the administration. On Monday, the media didn’t let facts get in the way of their narrative when falsely claiming the NRA made their convention a gun free zone. With Tuesday came revelations that NBC was allegedly pressuring 115 female reporters to sign a letter last week backing Tom Brokaw, who was accused of sexual misconduct. Stelter himself aided in hurting the media’s credibility in this instance because of his blatant double standard.

So, obviously, the media was going through their own credibility crisis, something Stelter didn’t seem to recognize or didn’t care to. But as Stelter himself declared, unironically, “this shouldn't be about feelings. This should be about facts.”

The relevant portions of the transcript below, click "expand" to read:

BRIAN STELTER: But first, back here in the U.S., enough is enough. The lies, the deceit, the fear mongering. Journalists increasingly are feeling empowered to call out the Trump White House's lies. Because the evidence is right on tape. It made me wonder at the end of a long week was this a lie, too?

STELTER: That was from the campaign. But this now, the Trump presidency, this is what a crisis of leadership looks and feels like. Every week another scandal. Every week another cover-up. This week it involved Rudy Giuliani. You see him there on Hannity. He was talking about Stormy Daniels and the payoff and questions about when she was really paid off and how, when did Trump know, were laws violated? Oh, and were there other Stormy, too?

He was on ABC’s This Week just a couple of hours ago and he didn't rule it out. This week I have to admit I chuckled at some of the banners on screen—some of the headlines calling this a White House credibility crisis. I mean, that is true. That's objectively true. It is a crisis, but it's been true since day one. Reporters are always trained to cover what's new, what's different, what do you got, what's happening? But Trump's fibs and falsehoods are the opposite, they’re not new. He's been behaving this way his whole life. Heck, Trump entered politics on a lie about President Obama.

So what is new? I've been thinking about that, trying to figure out what is new. I think the answer is the reporting. Reporters are revealing Trump's lies one by one. You know, Stormy Daniels made a cameo on SNL last night but is only a household name thanks to reporting by The Wall Street Journal and other outlets. The same for Dr. Harold Bornstein also parodied by SNL, that’s the president's former doctor. NBC got ahold of him recently and he revealed that his office was, his word, “raided” by Trump's bodyguard and lawyer.

Borstein then told CNN his hyperbolic letter attesting to Trump's health back in 2015 was not truthful. Quote, “Trump dictated that whole letter. I didn't write that letter. I just made it up as I went along.” Let's just sit with that for a minute. Trump attacked Hillary Clinton's health during the campaign, but he made up his own doctor's letter? Enough is enough. Yet there are people out there, a lot of them, who the press should not be covering the president this way who say we should not call lies lies.

STELTER: But this shouldn't be about feelings. This should be about facts.

STELTER: What we see instead from the Giuliani’s of the world are a lot of projections. He’ll say it's the Democrats who are colluding. Let me show you a few examples of this, how Trump and his supporters respond to media critiques. The first that I noticed was on Monday of this week, CNN was reporting Chief of Staff John Kelly had privately called the President unhinged at one point. Then 45 minutes later after CNN reported that, Trump said the press is unhinged. Coincidence? I don't know. Later in the weeks, all week long, coverage of the President's lack of credibility, calling it a crisis, and then on Saturday where did Fox go? You guessed it. The media has a credibility crisis. That's the banner there on screen.

CARL BERNSTEIN: We now have seen how Donald Trump has succeeded to a large extent understanding the country much better perhaps than the press. By making the conduct of the press the issue instead of his own conduct and that of the Russians and what he and the Russians may or may not have done in concert, that he is succeeding in making our conduct the issue to a large extent. It appeals to his base. His base has put the Republican Party enthralled and fear of this president and this presidency and one of the things we ought to be covering is whether or not the Republican Party is in such thrall that it is willing to give the President of the United States a pass on the question of whether or not he's acted in concert with a foreign power and undermined the interest of the United States as a candidate. That's what this story is about underneath it all.