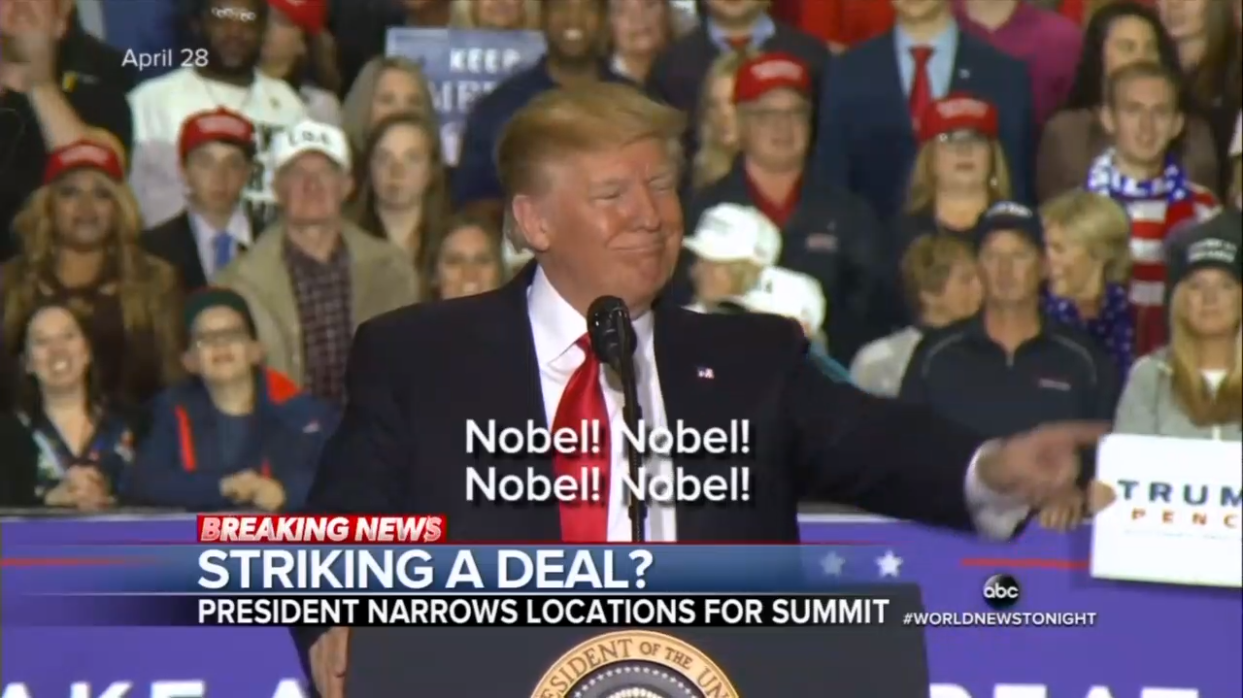 After praising President Trump for helping to usher North Korean dictator Kim Jong-un to the negotiating table over the weekend, on Monday South Korean President Moon Jae-in suggested that Trump should be awarded the Nobel Peace Prize. It’s an idea sure to send the anti-Trump resistance into a screaming fit. And true to form, the liberal major network news outlets (ABC, CBS, and NBC) along with Spanish-language networks Univision and Telemundo failed to mention Moon’s suggestion during their evening news broadcasts.

While the Nobel Prize was mentioned on both ABC and NBC, it was only talked about in the context of it being a silly thing Trump’s enthralled fan base was looking for. “Still, experts say it's too soon to celebrate, even with the President's supporters already chanting about a potential peace prize,” scoffed Chief White House correspondent Hallie Jackson during NBC Nightly News. In fact, CBS Evening News seemed so down on the idea that they didn’t even run a segment about the developments on the peninsula.

As for those developments, they were numerous and swift. “And more confidence-building steps between South and North Korea. The North today announced it will sync its time zone South Korea on May 5,” reported Fox News Chief White House correspondent John Roberts during Special Report. “Pyeongyang had been 30 minutes earlier. A small gesture, but one South Korean officials attach a great deal of significance.”

Roberts also noted that South Korea planned to start removing the massive loudspeaker system they utilized to blast “propaganda and K-Pop music across the DMZ.” “Over the weekend South Korean President Moon Jae-in credited President Trump with bringing Kim Jong-un to the table. Today, he told people he believes that President Trump deserves to be recognized with the Nobel Peace Prize,” he added.

Of course, many observers would remember that President Obama was awarded a Nobel Peace Prize back in 2009 for doing absolutely nothing and received the gross adulation of a swooning liberal press.

“So if this is a prize for good intentions - which sounds right - it does suggest that at least some folks abroad think that Obama is a figure of hope,” hyped Jeff Greenfield on CBS at the time. At the time, Brian Williams gushed on NBC about how the award was “one of the last remaining towering honors on Earth...." And on ABC, Charlie Gibson touted how “humbled” Obama felt that the Nobel Committee thought he inspired people:

And he says he shares the award with all who strive for justice and dignity. And he said he is humbled to be in the company of those who have inspired the entire world. But, the use of the word inspiration is interesting, George Stephanopoulos, because, indeed, that's why he won this award. The Nobel Committee feeling that he has inspired a new sense in the world.

And after Obama had accepted the politicized peace prize, CNN’s Christiane Amanpour ripped into the President’s naysayers, suggesting that “it's overdone, this pushing back against his award. He's obviously done something very significant, and that is...the United States has now had a new relationship with the rest of the world.”

The hypocrisy is stark when viewing the networks’ rushed to heap praise on Obama and then brushing a similar suggestion for the prize under the rug. If the baseline for getting a Nobel Peace Prize is nothing (and it has been awarded to terrorists), and even if the negotiations break down in the end, Trump has gotten closer to peace on the Korean Peninsula than anyone in decades. So the argument can be made that close is better than nothing at all.

JOHN ROBERTS: And more confidence-building steps between South and North Korea. The North today announced it will sync its time zone South Korea on May 5. Pyeongyang had been 30 minutes earlier. A small gesture, but one South Korean officials attach a great deal of significance.

BAIK TAE-HYUN [SoKo Unification Ministry] I think this measure is being taken to show such measures carry out his will and will taking place at a fast pace.

ROBERTS: In turn, South Korea will tomorrow begin dismantling the loudspeaker system that for decades has been blasting propaganda and K-Pop music across the DMZ and into North Korea.

Over the weekend South Korean President Moon Jae-in credited President Trump with bringing Kim Jong-un to the table. Today, he told people he believes that President Trump deserves to be recognized with the Nobel Peace Prize.