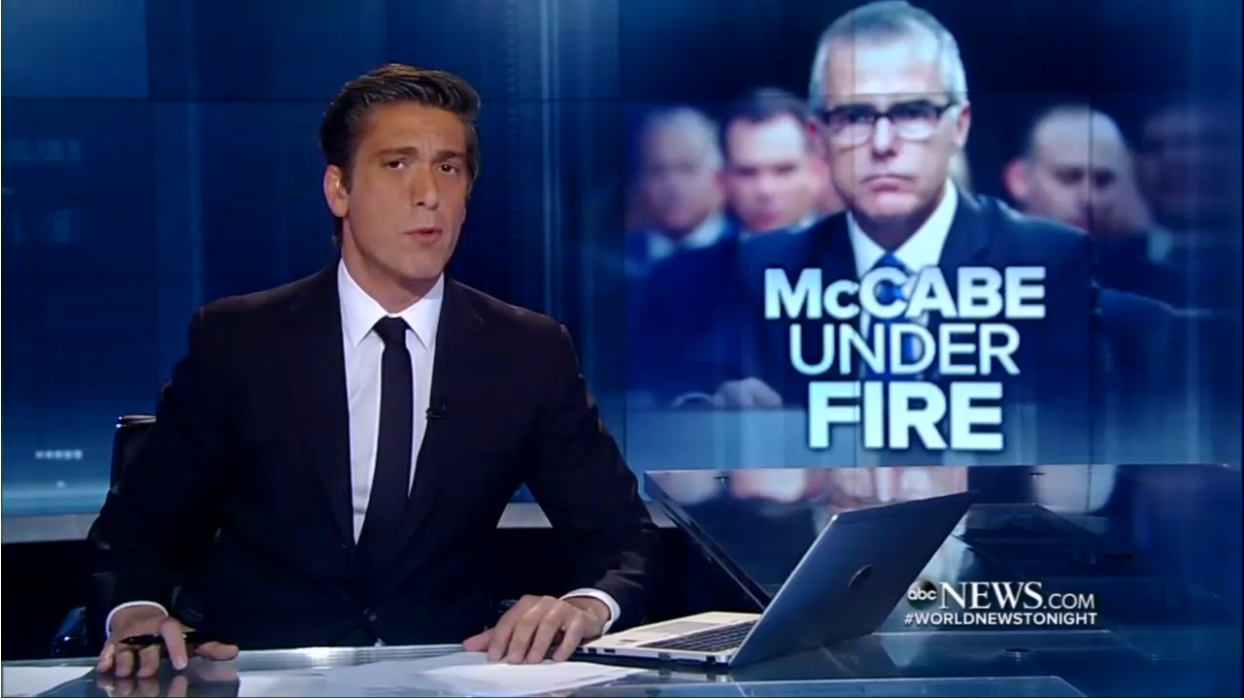 Former FBI Deputy Director Andrew McCabe’s retirement went from bad to worse on Thursday as the Bureau’s Inspector General brought his case to federal prosecutors with a criminal referral. McCabe was fired in March after an IG investigation found he had lied to investigators about leaks to the press during the Clinton e-mail investigation. When it came to reporting the damning news that evening, NBC Nightly News ignored revelation all together while ABC and CBS gave it less time than his firing.

This was not the first time NBC had ignored developments involving McCabe’s misconduct during investigations. When it was first revealed that McCabe’s head was on the chopping block just days prior to his retirement, NBC failed to dedicate a single second of airtime (as the NewsBusters previously reported). And when the IG report was actually released on March 13, NBC didn’t touch on it until Saturday.

Looking back at the MRC’s previous reporting on McCabe coverage, we found that the CBS Evening News downplayed his firing. When it was apparent that McCabe was possibily going to be fired, CBS dedicated one minute and 15 seconds to the news. But upon the criminal referral's arrival, they crammed it into a larger report and only spent 42 seconds on it. And as for the release of the IG report, CBS also used just 42 seconds to inform viewers.

And when reporting on the criminal referral Thursday, CBS White House correspondent Major Garrett seemed to suggest it was just something for President Trump to wield against the Mueller investigation:

Mr. Trump has also tried to undermine the investigation by attacking former FBI officials. He has zeroed in on the conduct of former Deputy FBI Director Andrew McCabe who has been accused of being deceptive about his contacts with the media.

Meanwhile, on ABC’s World News Tonight, they gave the criminal referral the largest share of airtime with a one-minute-and-38-second segment. 62 seconds of that time was anchor David Muir and chief Justice correspondent Pierre Thomas summarizing what McCabe was being accused of, while the rest recapped his role in various investigations and his firing.

Previously, World News Tonight spent almost two minutes (119 seconds) on the possibility McCabe could be fired and most of that was worrying about him losing his pension. As the MRC had noted at the time, ABC had spent only 15 seconds on the details of why McCabe was in hot water. The worrying for his pension went on for days. And when the IG report was finally released, World News Tonight ignored it.

“The former second in command at the FBI now facing a possible criminal investigation by the very agents he once led,” Thomas bemoaned on Thursday. “Today [on CNN], Comey saying he could even potentially be a witness against McCabe, offering his former deputy little support.”

Instead of reporting on McCabe’s criminal referral, NBC Nightly News ran reports on how YouTube selected recommended videos claiming it was “secrets revealed” and a Michigan family having their 14th boy.