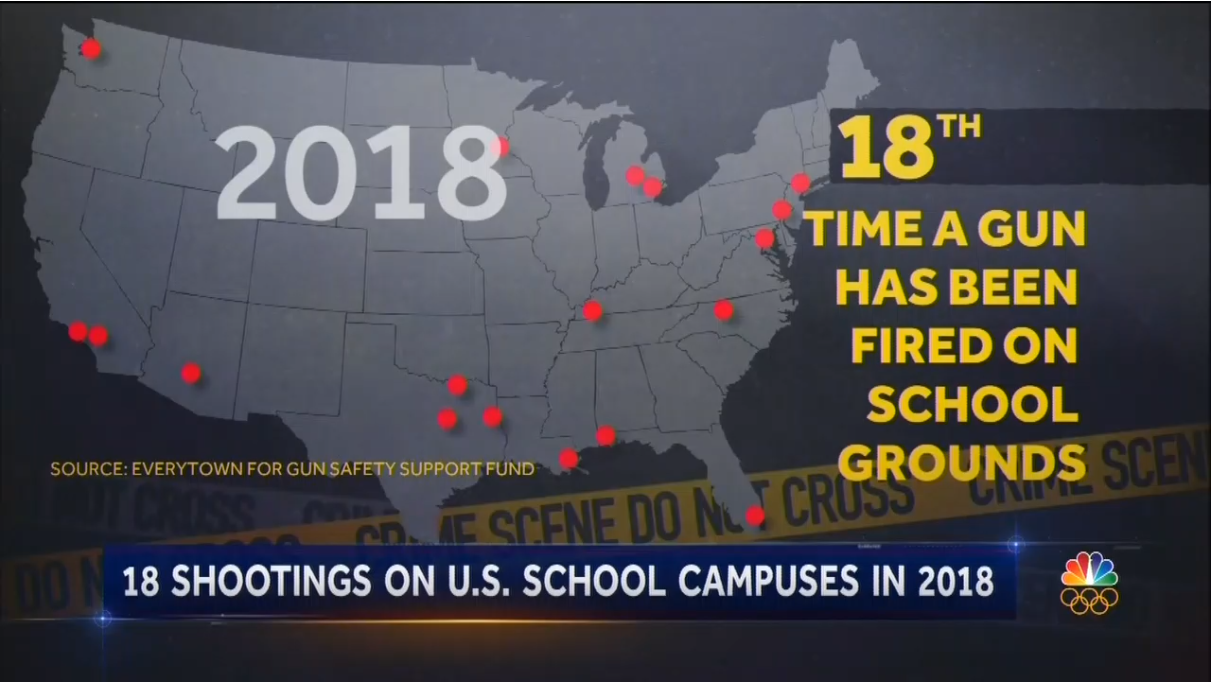 In the aftermath of Wedneday's terrible school shooting in Parkland, Florida, the liberal media callously rushed to use the deaths to push for more gun control. And in their haste, the three major network news outlets (ABC, CBS, and NBC) relied on a statistic from the anti-gun lobbying group Everytown for Gun Safety which claimed that there had been 18 school shootings since the start of 2018. And since it fits the narrative, why fact check?

“You know, scenes like these today, shootings at schools, an all-too-familiar sight across this country. This shooting, by one count, the 18th just this year. Multiple fatalities at several of those shootings,” announced anchor David Muir during ABC’s World News Tonight.

That same statistic was echoed on NBC Nightly News when anchor Lester Holt lamented: “This horrifying shooting in Florida marks the 18th time gunfire has erupted on a school campus in America just since the start of this year. With more now on these tragedies and images that have become disturbingly common in our country…”

“Perhaps the biggest question: Why is this happening more frequently? This year, there have already been 18 school shootings. There were seven by this time last year,” reported Don Dahler on CBS Evening News. “Since 2013, the number of school shootings has steadily risen, with the sole exception being 2016, when there were only 48. Only-- as if that was in any way acceptable or normal.”

But as The Washington Free Beacon’s Stephen Gutowski exposed late last month, the numbers generated by Everytown were highly misleading.

“Everytown for Gun Safety uses its own definition based on what it said is ‘expert advice and common sense, which the gun-control group claims is ‘straightforward, fair, and comprehensive,’” Gutowski reported. “The group said it counts ‘any time a firearm discharges a live round inside a school building or on a school campus or grounds.’”

This broad definition places two separate suicides, a January 9 incident where a man shot a BB gun at a bus window resulting in no injuries; a January 10 incident where a student in a criminal justice club accidentally shot a peace officer's real gun at a target on a classroom wall instead of a training gun resulting in no injuries; a January 9 incident where gun shots were fired from somewhere outside of Cal State San Bernardino, which struck a building on campus without injuries; and other incidents next to the murder of a Winston-Salem State University student at a nightclub on the Wake Forest University campus, the January 22 shooting of a 15-year-old at a Dallas-area high school, and Tuesday's Marshall County High School shooting which left 2 dead and 18 others injured.

“In its explanation of its count, Everytown includes an open call for new gun-control measures as a result of the number of school shootings it claims occur each year in the United States,” Gutowski added.

The liberal networks were eager to push gun control come hell or high water regardless of what the truth was.