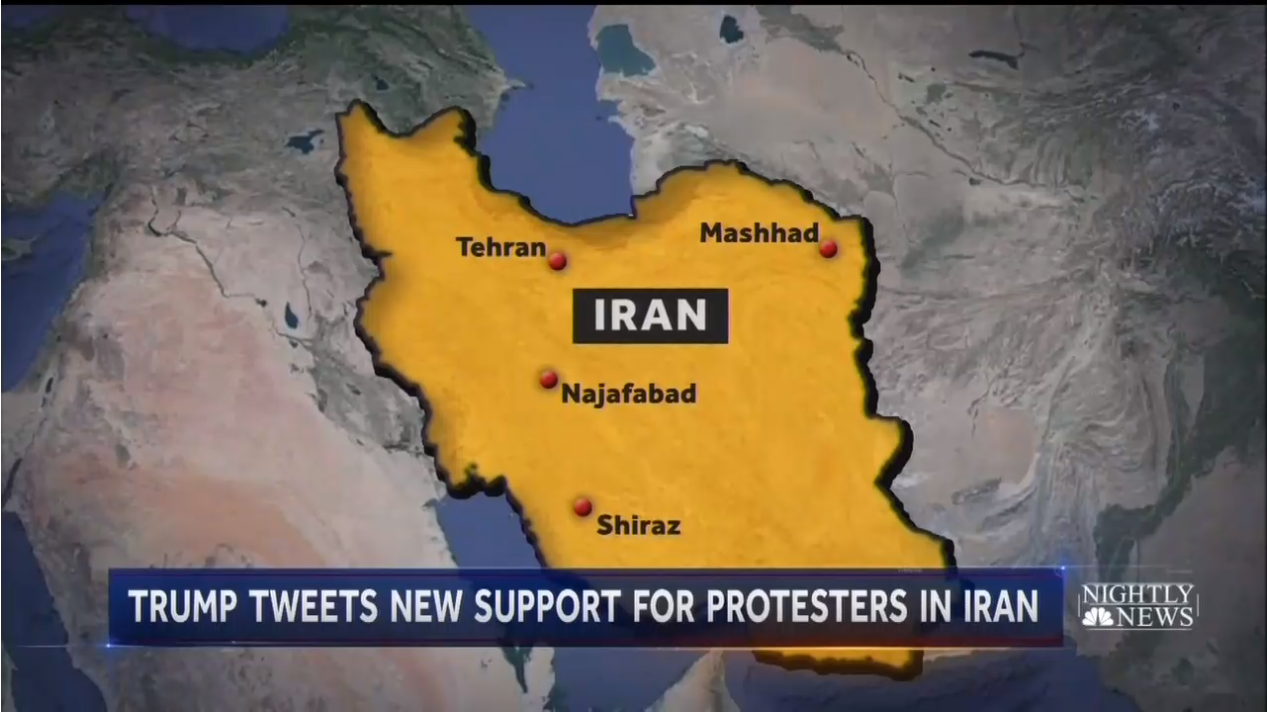 The network coverage of the Iranian protests since their beginning nearly a week ago has been utterly abysmal. From ignoring them all together to downplaying the murder of protesters, the three major network news outlets have had to be dragged kicking and screaming to cover the spontaneous uprising. Tuesday was no different with ABC’s World News Tonight and NBC Nightly News downplaying the size and expansiveness of the demonstrations. CBS Evening News went off the deep end and started openly questioning who was actually killing the protesters.

In one of the most outrageous examples of the liberal media downplaying the Iranian protests, NBC’s Chief Foreign Affairs Correspondent Andrea Mitchell (who has a long history of kissing up to brutal foreign regimes) claimed the protests were only 10 percent of their actual scope.

“Unlike Iran’s last major protest over disputed elections in 2009, these were sparked by frustration over a weak economy. Starting in the city of Mashhad, smaller but for the first time spreading nationwide,” Mitchell asserted. And as she said that the current protests were “smaller,” she flashed a map on the screen that highlighted only four cities. That map was an outright fabrication of the truth.

Mitchell’s map claiming that there were protests in only four cities was a blatant lie easily proven false by a map tweeted out by the Associated Press that puts the city count at over three dozen, 37 to be precise. But prior to her report, while anchor Lester Holt was still delivering the introduction to the segment, the network flashed yet another map showing only 21 cities having protests. It did show more cities but it was still less than two-thirds of what it really was.

The NBC reporter was also worried about the negative effects President Trump would have with his tweets of support. “President Trump supporting the protests, tweeting: “The people of Iran are finally acting against the brutal and corrupt Iranian regime… the U.S. is watching,” she noted while failing to mention that what the U.S. was watching for was signs of human rights violations. “But could the Trump tweets backfire? Sparking a crackdown?”

Feigning concern about a crackdown against the protesters was a disturbing narrative from the liberal media to try to shut up protest supporters.

Meanwhile, on ABC, Chief Foreign Correspondent Terry Moran tried to discredit the uprising by claiming there were only just a handful of protestors here and there which made up a much smaller force than in 2009. “It’s the sixth straight day of these protests, hundreds arrested, at least 21 killed, the largest demonstrations since 2009. But back then it was millions in the streets, now it’s tens of thousands,” he declared with a deflated tone.

And during CBS Evening News, correspondent Elizabeth Palmer seriously questioned the reports of murdered protestors. “There’s no way to know who was shooting, but state media say six people died,” she reported, giving the tyrannical regime the benefit of the doubt. It should be noted that Palmer has a history of being one of the few western journalists allowed to report from inside Iran, so it can be argued that her muddying of the murders was done to preserve that relationship.

ANDREA MITCHELL: Stunning protests rarely seen in Iran. Cars burning, buildings in flames, a poster of the all-powerful supreme leader Ayatollah Khomeini is trampled, chants of death to the dictator. Now Khomeini blaming the U.S., saying the enemy is waiting for an opportunity for a crack through which it can infiltrate. A claim strongly rejected by the administration.

NIKKI HALEY: We all know that's complete nonsense. The demonstrations are completely spontaneous.

MITCHELL: Unlike Iran’s last major protest over disputed elections in 2009, these were sparked by frustration over a weak economy. Starting in the city of Mashhad, smaller but for the first time spreading nationwide. President Trump supporting the protests, tweeting: “The people of Iran are finally acting against the brutal and corrupt Iranian regime… the U.S. is watching.” And earlier tweeting: “Time for change.”

Is he calling for regime change?

HEATHER NAUERT: I think what the President is talking about is exactly what the Iranian people are saying. That they want change, the government to take care of them.

MITCHELL: But could the Trump tweets backfire? Sparking a crackdown?

RYAN CROCKER: What we can do is, again, give the regime excuse to come down very very hard on them.

MITCHELL: The U.S. caught off guard by protests but now encouraging them. Andrea Mitchell, NBC News at State Department.