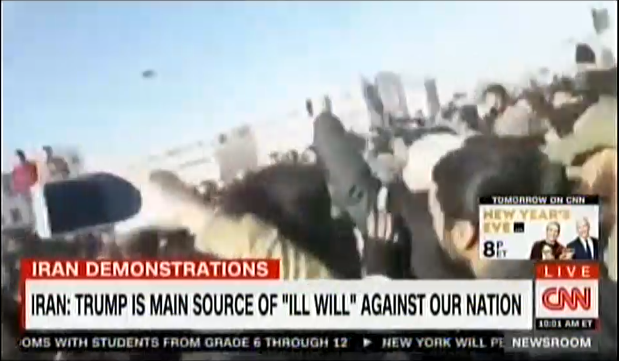 Chants of “death to Rouhani” and “we don’t want an Islamic republic” echoed through the streets of Iran on Saturday, marking the third day of fierce anti-government protests sweeping the country. President Trump weighed in, tweeting: “Many reports of peaceful protests by Iranian citizens fed up with regime’s corruption & its squandering of the nation’s wealth to fund terrorism abroad.” Despite their history of hyperventilating over every tweet the President sends, the three major network news outlets have ignored the protests. Meanwhile, CNN downplayed it with help from Iranian propaganda.

Despite that anti-government protests were fleetingly rare in Iran due to the ruling regime’s infamous brutality, thousands upon thousands of Iranians have taken to the streets calling for an end to the theocratic government. And #IranianProtests was one of the top trends on Twitter for roughly two days. There, videos can be seen of throngs of people emphatically denouncing the ayatollah, the religious mullahs, and the dictatorship.

But despite the widespread nature of the protests, ABC, CBS, and NBC have blacked out coverage from their morning and evening news broadcasts. The President’s tweet touting the peaceful protests and warning the Iranian government went completely unreported Saturday morning (the networks couldn’t cover the tweet Friday evening because it went out after they went off the air).

Instead of reporting on the uprising on Saturday, all three of the networks took swings at Trump for spending his Friday golfing even though it was spent with members of Florida’s National Guard.

In addition to criticizing Trump for golfing, which they didn’t do for President Obama, ABC’s Good Morning America mocked Trump for the political problems he was sure to face in the new year. CBS This Morning touted how the GOP could lose control of the House in the 2018 elections and hyped a protester at Disney’s Hall of Presidents shouting “lock him up” at the Trump animatronic. NBC’s Today actually reviewed other Trump tweets from the last few days but omitted his tweet about Iran.

Meanwhile on CNN, even though the news outlet has an extensive international arm, they put off covering the protests until early Saturday morning. And by that time, the only thing they found interesting about the demonstrations was the small PRO-government counter-protests that had sprung up. It has been the only article CNN has written about it the Iranian uprising.

“Crowds of pro-government supporters demonstrated Saturday in Iran after two days of rare anti-government protests which spread to a number of cities. Nearly 2,000 people gathered peacefully in the capital, Tehran, in support of the government's policies, an eyewitness there said,” they asserted.

CNN mentioned the “death to Rouhani” chants clearly heard in videos from the protests but claimed they could not “independently verify the authenticity of the footage.” And they seemed to take the side of Iran’s supreme leader as they touted his “landslide re-election in May after campaigning largely on social reform.” During their on-air broadcasts, they wouldn’t dare repeat the chants but used Iranian propaganda to refer to them as “harsh slogans.”

They also hyped Rouhani as “a liberal in the Iranian context who backed the 2015 nuclear deal on the promise that sanctions would be lifted and life would be better for all Iranians.” They immediately lamented how Trump had made that promise “difficult to live up to,” and suggested that only the Trump administration saw Iran as a regional threat with “alleged involvement in conflicts including Yemen and Syria.”