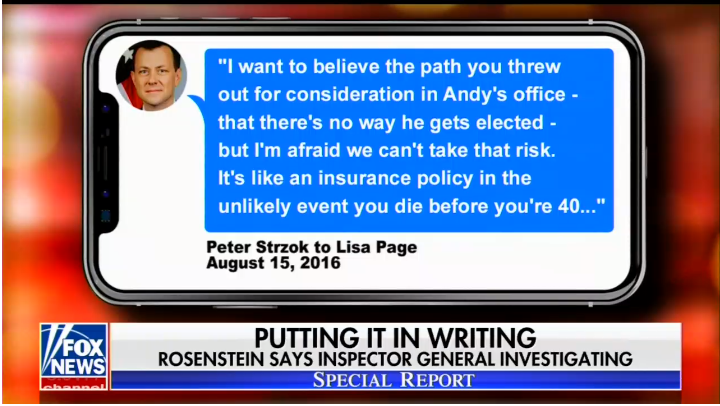 On Wednesday, Deputy Attorney General Rod Rosenstein was put through the wringer by House Republicans in an open hearing when it came to the derogatory text messages sent by anti-Trump/pro-Hillary FBI officials. The texts included name-calling directed at Trump but also a cryptic message about an “insurance policy” for the “risk” of a Trump presidency. The coverage of the texts varied wildly among the network evening newscasts; from no texts shown to covering up the officials’ relation to certain FBI investigations.

The FBI officials in question were investigator Peter Strzok and lawyer Lisa Page. Their messages were released as part of a review of Strzok following his removal from the special counsel investigation into Russian meddling in the 2016 election.

The coverage by ABC, CBS, and NBC varied so much that it’s best to begin with what none of them covered. None of the networks mentioned that Strzok and Page were in a romantic relationship, which was why they sent nearly 10,000 messages to each other. On top of that, they didn’t mention that Strzok once sent a cryptic and unsettling anti-Trump message to Page that read:

I want to believe the path you threw out for consideration in Andy’s office – that there’s no way he gets elected - but I’m afraid we can’t take that risk. It’s like an insurance policy in the unlikely event you die before you’re 40…

The “Andy” mentioned in the text was believed to be Andrew McCabe, the deputy FBI director. And in one text from Page to Strzok, she said (and NBC noted): “And maybe you’re meant to stay where you are because you’re meant to protect the country from that menace.”

CBS Evening News coverage was arguably the worst of the three. Reporter Paula Reid never read any of the texts for viewers and only noted how “they called him an ‘idiot’ and prospects of a Trump victory ‘terrifying.’” And she never mentioned any of the couple’s pro-Hillary messages.

She did state that Strzok handled the FBI probe into Clinton’s e-mails, but failed to mention that he edited language in former FBI Director James Comey's July 5, 2016 announcement so it was less incriminating. There was also no mention how he was lied to by Clinton associates and didn’t charge them for lying to the FBI, as he did with Mike Flynn.

But Reid did manage to insinuate that the motives of House Republicans were what people really needed to look out for: “Republicans are trying the use these texts in an attempt to undermine the credibility of the Special Counsel's probe, but Deputy Attorney General Rod Rosenstein, the only man who can fire Mueller, told Congress today that he has seen no reason to remove him.”

On ABC’s World News Tonight, legal correspondent Pierre Thomas seemed to downplay their anti-Trump attitude by noting how they chided Senator Bernie Sanders. “Long before the Russia investigation was under way, Donald Trump often the target of the FBI employees' ire. But they take aim at others, too. Still, they’re drawing fire for some,” he reported. He seemed oblivious to the fact that he was really pointing out that they were pro-Hillary. He also failed to mention Strzok’s role in the Clinton e-mail investigation.

During NBC Nightly News, anchor Lester Holt noted Strzok’s role in the e-mail investigation but omitted his double standard in prosecuting lying between the Clinton and Trump teams. But Justice Correspondent Pete Williams did a fairly decent job demonstrating that not only were the pair anti-Trump but also pro-Clinton. Although, he failed to mention the cryptic message Strzok sent to Page, shown above.

It’s noteworthy that when the story first broke of Strzok’s anti-Trump bias, both CBS and NBC ignored the news altogether. 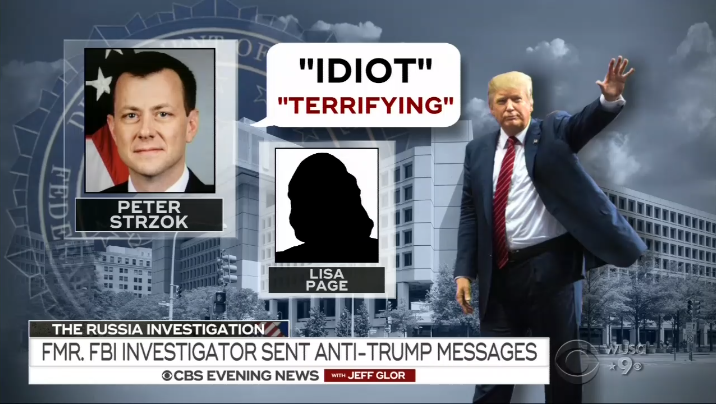 JEFF GLOR: Deputy Attorney General Rod Rosenstein defended Special Counsel Robert Mueller today before the House Judiciary Committee. Republicans say Mueller's investigation of Russian election meddling is biased against President Trump, and they point to text messages from a lead FBI investigator as proof. Justice reporter Paula Reid joins us now with more on this. Paula, so first of all, how did these text messages come to light?

PAULA REID: Well, Jeff, the Justice Department's inspector general found the text messages while investigating how the FBI and DOJ handled matters related to the 2016 campaign. Now, these texts between FBI counterintelligence agent Peter Strzok and Senior FBI Lawyer Lisa page strongly criticized Donald Trump during the campaign. They called him an “idiot” and prospects of a Trump victory “terrifying.”

Now, Strzok was a top official on the FBI investigation of Hillary Clinton's use of a private e-mail server while secretary of state. After that Strzok and Page joined the bureau’s investigation into Russian meddling in the election.

Now, when these text messages criticizing Donald Trump were discovered, Special Counsel Robert Mueller removed Strzok, but both he and Page are back working at the FBI.

GLOR: So Paula, how do these messages affect the investigation?

REID: Republicans are trying the use these texts in an attempt to undermine the credibility of the Special Counsel's probe, but Deputy Attorney General Rod Rosenstein, the only man who can fire Mueller, told Congress today that he has seen no reason to remove him. 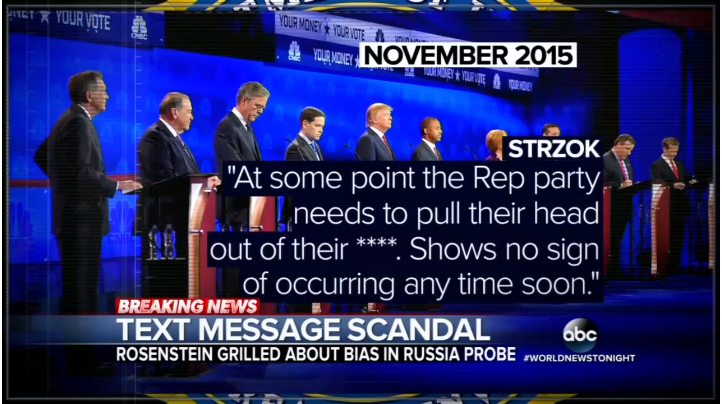 PIERRE THOMAS: Tonight, the FBI on the hot seat amid questions of FBI bias, after hundreds of text messages, some of them anti-Trump, between an FBI agent and FBI attorney, have been made public. The messages were exchanged during the primaries between Peter Strzok and Lisa Page, shown here in a Daily Mail TV photo.

Long before the Russia investigation was under way, Donald Trump often the target of the FBI employees' ire. But they take aim at others, too. Still, they’re drawing fire for some. In August 2015, page texts, "I just saw my first Bernie Sanders bumper sticker. Made me want to key the car." Agent Strzok responds, "He's an idiot like Trump. Figure they'll cancel each other out." And Three months later, Strzok writes, "At some point the Republican Party needs to pull their head out of their expletive. Shows no sign of occurring anytime soon."

The day after a Republican primary debate, page writes this "God Trump is a loathsome human. Yet he may win." Agent struck responds: "America will get what the voting public deserves." “That’s what I’m afraid of,” says Page.

At another point, Strzok writes, "God Hillary should win 100 million to 0." Page's response, "I know. Also, did you hear him make a comment about the size of his blank earlier? This man cannot be president."